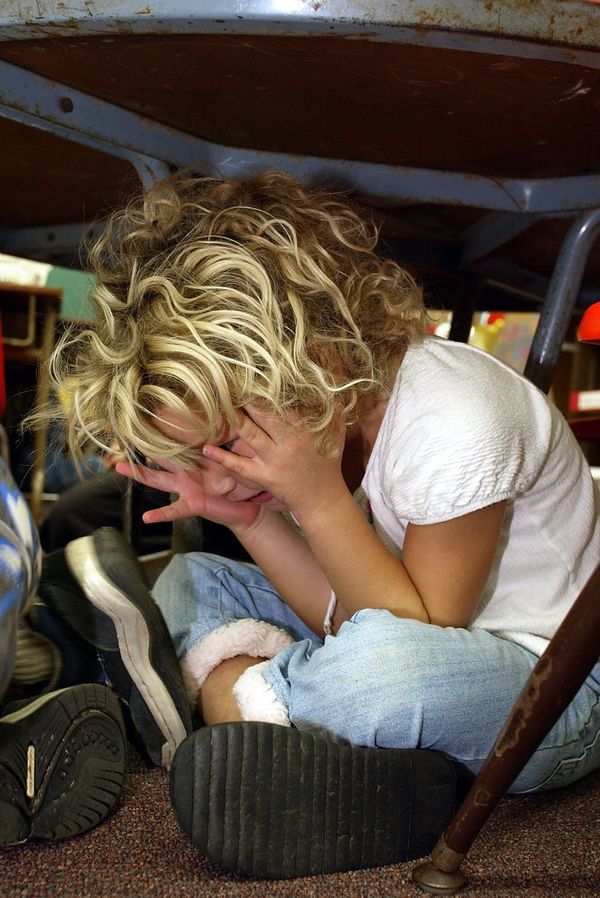 Ever since the deadly February shooting at Marjory Stoneman Douglas High School, students and parents have been sharing alarming stories. On Wednesday, podcaster Sarah Wine-Thyre tweeted the about picking up her 12-year-old daughter after their school was on a lockdown because of the presence of an “unknown intruder.” Wine-Thyre shared her daughter’s immediate thoughts and impressions of the frightening event. The tweets went viral, prompting a discussion of students’ fears for their safety in school — and whether, in trying to keep students safe, we’re inadvertently making them more afraid.

This afternoon, I received text alerts from my kids' school that they were on lockdown. I thought you might like to know what happens, from the perspective of my 12yo. I just picked her up from school and she was rattled and full of adrenalin.

Wine-Thyre tweeted that her daughter and friends did not get updates about what was happening throughout the 41-minute lockdown. Her daughter also told her that she “knew this was for real,” because it felt unlike drills the students have participated in. The students were huddled in a corner of a classroom without any information about why they were on lockdown. Many were sobbing.

A child's experience of a lockdown is one of terror. They don't know what's happening until it's over. Plenty of people see this as "the price of freedom." It's appalling that we do this to kids.

Wine-Thyr’s tweets can be seen as part of a larger conversation about student fears post-Parkland. Though school shootings are on the rise, they’re still a very rare occurrence. Yet, students and families have been reporting major fears in the months since nine people were killed in Parkland. They’ve also been reporting incidents where an imminent threat was perceived, even if that perception was not accurate. The New York Times reports that “scenes of gun threats, scares and lockdowns have played out around the country dozens of times each day” since the February shooting.

Student activists, who have been advocating for stricter gun laws and other reforms, have also sometimes claimed there is an “epidemic” of school shootings, and that violence in schools is the “new normal.” But as Eric Levitz recently noted in New York, these claims have “little basis in empirical reality.” That is: school shootings, while horrifying and tragic no matter how often they occur, are not the norm.

According to the National Center for Education Statistics, .26 percent of public K-12 schools experienced a shooting during the 2009-2010 school year (the most recent stats the NCES has). The statistics include incidents where nobody was hurt. In March, David Ropeik, a risk perception and risk communications consultant, noted that the odds of a student being killed by a school shooter on any day since 1999 are one in 614,000,000, and that school shootings have in fact become less frequent overall since the 1990s.

But these figures don’t offset what appears to be widespread panic among kids and families. Further, any violence is cause for concern, and there’s still some risk that students and school staff may be harmed at school. In response to these threats, some schools have turned to the ALICE Training Institute, a for-profit “security training company” formed in the wake of the Columbine shooting.

ALICE (which stands for Alert, Lockdown, Inform, Counter, Evacuate) was founded by two former police officers and a former educator. The controversial training program offered by ALICE encourages students and teachers not to merely be “passive” during lockdown scenarios. The “counter” part of the ALICE protocol includes attempting to confuse a shooter by throwing things or screaming.

The company also offers services to law enforcement, colleges, hospitals, and places of worship, among other institutions. School districts are the number one institution that uses ALICE’s services, followed by law enforcement departments. The Training Institute claims to have provided services to 3,700 K-12 school districts. A 2017 article in Education Week noted that ALICE became more popular following the 2012 shooting at Sandy Hook Elementary School.

While lockdowns have been credited with saving lives during school shootings, there isn’t yet any evidence that ALICE’s more aggressive “countering” tactics are effective.

More and more schools have been running drills or using ALICE programs in the last several years, according to Education Week. But some experts are critical of ALICE, arguing the protocols are potentially dangerous and not supported by evidence. Ken Trump, a school safety consultant and vocal critic of ALICE told NPR in 2012 that, “Most middle-school kids can’t decide between chicken nuggets and pizza for lunch [so] to think that we’re gonna put that liability and responsibility in the hands of a seventh-grader is insane.”

Michael Dorn, executive director of the non-profit campus safety organization Safe Havens International, has also criticized ALICE. In 2015 he said of the training program, “People are being conditioned for the wrong situations and in the wrong ways. I know it’s all meant well, but at the end of the day, it may waste a lot of money and time and may not make the schools that much safer. And that is our priority.”

While school shootings are very rare, they do happen sometimes, and nobody wants kids and school staff to be unprepared. How exactly to get everyone prepared is the subject of some debate, but experts have their doubts about aggressive tactics. In the meantime, there’s also a need to address the much more common and prevalent concern of students’ daily fears.