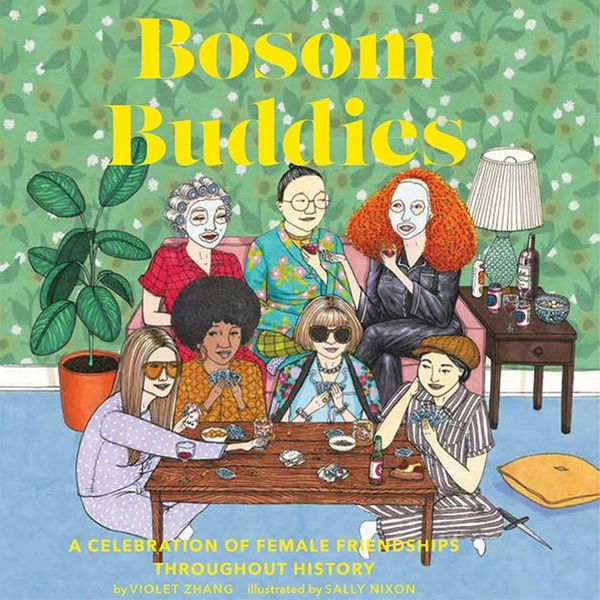 Female friendships are vital, powerful, and can lead to amazing collaborations. (Just look at Baublebar BFFs Amy Jain and Daniella Yacobovsky.) Even when your girl gang members are long distance or in different stages of their lives than you, keeping those relationships rocking is beneficial for your mental health. Author and editor Violet Zhang wrote her new book, Bosom Buddies: A Celebration of Female Friendships Throughout History (with illustrations by Sally Nixon, $17), that chronicles 25 relationships throughout history that are complex, supportive, and life-changing. Zhang shares some important lessons she learned while researching this inspiring compendium of BFFs.

1. Women are stronger together. Zhang’s own cherished friendships were her motivation to research other historic relationships. “Beginning with the Women’s March in 2017, it felt like women were finally getting a platform to speak on, and as a result, there was this resurgence of interest in women’s stories from the past and present. This book, for me, felt like part of that movement. I hope readers remember how strong we are. History proves it,” says Zhang. One of the earliest relationships that Zhang writes about is two Vietnamese sisters — Trung Trac and Trung Nhi — who rebelled against Chinese overlords in 40 C.E.

2. You don’t have to do it alone. After each friendship, Zhang includes quotes from the featured icons in her book, including Anna Wintour and Grace Coddington. Wintour and Coddington started at American Vogue in 1988 as the editor-in-chief and creative director, respectively. Says Coddington, “I’m not the ‘anti-Anna.’ The smarter people can see it’s not a question of fighting. It’s how we work together. She can’t just say yes to everything. I certainly don’t. I just have a different way of saying no.” During her research, Zhang found it encouraging that it was often better, more efficient, and more fun to take on challenges and obstacles with a friend.

3. Complicated friendships are part of life. Of course, not all friendships are sunshine and Galentine’s Day gifts. Zhang thought it was important to feature some fraught relationships. Mary Todd Lincoln and Elizabeth Keckley, and Virginia Woolf and Katherine Mansfield, were women who had difficult friendships that included jealousy, anger, and disappointment. “[It’s] true to how things actually went down, and also true to life, because sometimes friendships are fraught with tension, and sometimes they don’t last forever. I also think that the complicated friendships are the most interesting,” says Zhang. (Zhang headshot via Natasha Chernis)

4. Female relationships can push us to new heights. One of the most modern day BFFs are Oprah Winfrey and her gal pal Gayle King. When the two women were starting out in their careers, Winfrey as a news anchor for and King as a production assistant, a snowstorm stranded them together and King stayed over Winfrey’s place. Although they grew up very differently, they supported each other as ambitious Black women. Now, the two call each other every day and have a strong professional relationship that continues to this day. Zhang writes, “In Oprah’s house, there is an entire wing dedicated to Gayle.”

5. Friends can be life-long mentors. In 1991, Valerie Jarrett, the then-chief of staff to the mayor of Chicago, offered Michelle Obama a job. When Jarrett met Michelle’s fiancé Barack Obama, she introduced the two young lawyers to her inner circle and became their mentor in the political realm. Fast forward to present day, and Jarrett is a close confidante to the former first lady who was often referred to as the “First Friend” while the Obamas were in the Oval Office.

6. We are each other’s best allies during difficult times. Qui Jin, a feminist poet in 19th-century China, met her future friend Xu Zihua when Zihua became the principal at a girls’ school where Jin was a teacher. Jin, with Zihua’s encouragement, started a monthly newspaper for women and organized a rebellion against the current leadership. Jin was beheaded for speaking out, and Zihua was the one who arranged a funeral for her friend when others were too afraid to invoke retribution from the government. “I really love all the stories in this book, but my favorites have to be the ones that were lesser known to me, the ones that were more difficult to piece together. The friendship between Qiu Jin and Xu Zihua is one of my favorites,” says Zhang.

7. Outside forces can test the boundaries and definitions of friendship. Zhang profiles authors Zora Neale Hurston, an African American writer, and Pulitzer Prize-winner Marjorie Kinnan Rawlings, who met in 1942, when segregation was prevalent. Says Zhang, “The racial divide of their time made it very unlikely that these two would become close friends — but they did. Even as friends, though, they still had to navigate their circumstances, and many of their interactions were tainted by racism.” But what endured for Hurston and Rawlings was a deep mutual respect for each other’s work, which kept their often rocky relationship alive.