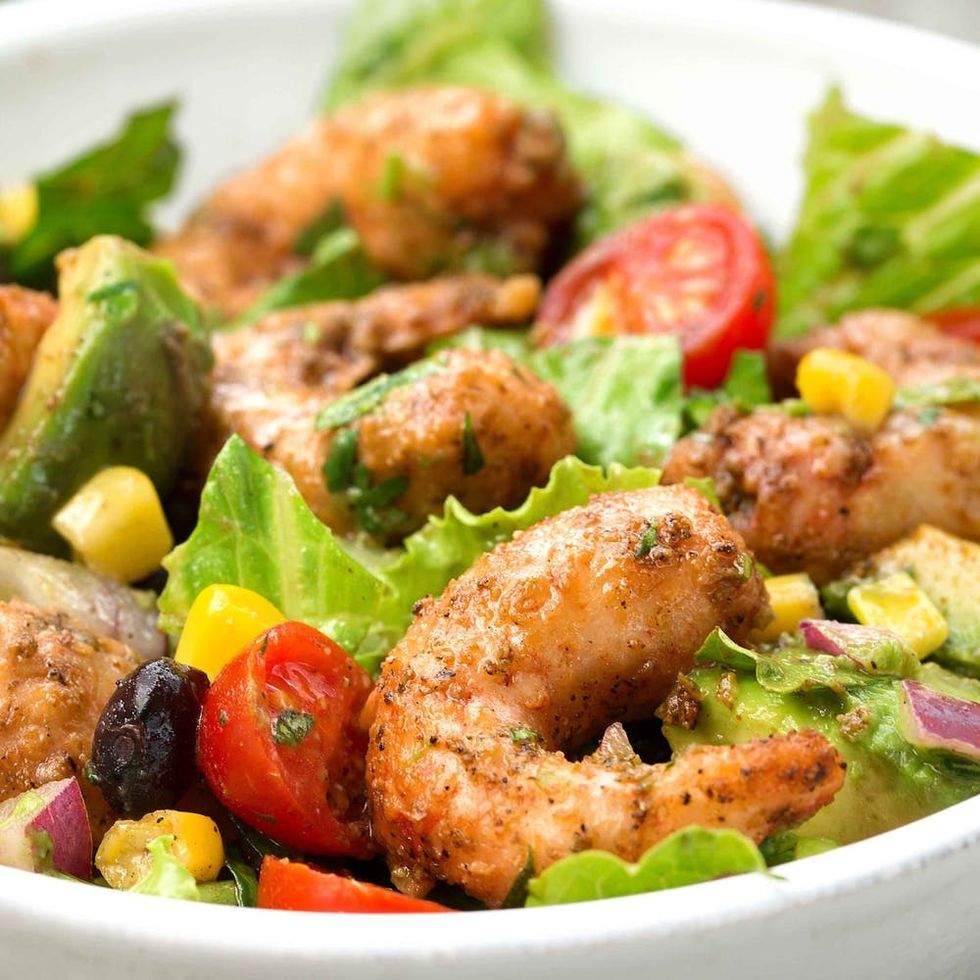 Even in the specialty food world, it’s time for a new year, new you reckoning, as evidenced by the abundance of 2018 vegan food trends on display at this year’s Winter Fancy Food Show in San Francisco. This show provides an early-year sneak peek of what will be hot (or not) in food. This year reflected the changing dynamics of eating, and how plant-based eating is on the rise and getting more recognition outside of the natural food world. At the show we spotted everything from eggplant-bacon jerky to shelf-stable kombucha bars and even apple cider vinegar powder to mix on-the-go, and pulled together our favorite vegan food trend finds coming to stores near you.

1. Fish-Free Seafood: You’d never know that New Wave Foods shrimp is fish-free. Made out of algae, this non-GMO, kosher, vegan shrimp looks and tastes texture-wise like cooked shrimp. New Wave Foods is the only plant-based seafood company to partner with the Monterey Bay Aquarium Seafood Watch. Good Catch griddled its Fish-Free Crab Meat in delectable crab cakes, and its Fish-Free Tuna is equally tasty. Chefs created the fish-free alternatives, available in three flavors including Naked in Water, Olive Oil and Herbs, and Mediterranean. The plant-based fish is made from six legumes and algae oil and has a similar nutritional value to tuna fish. Stay tuned for its launch later this summer. Both companies’ mission is simple: Save the oceans and feed people plant-based fish. (Photo via New Wave)

2. Plant-Based Cheese: In addition to its award-winning vegan cheese wheels, Miyoko’s Kitchen recently launched a line of pub cheeses that incorporate beer-like flavor in each bite of the creamy spreads, including Biergarten Garlic Chive. Additionally, this brand introduced a line of vegan cream cheeses including Un-Lox Your Dreams that utilizes seaweed to give it a fishy flavor, and is perfect for smearing on bagels. Kite Hill was all abuzz about its new ricotta, made of cultured almonds, that melts when baked in recipes like lasagna. Jalapeño Cream Cheese-Style Spread joins its award-winning Chive Cream Cheese-Style Spread, which nabbed the SoFi award at the 2017 Fancy Food show for best new vegan product. Its new Greek yogurt adds almond flour for extra protein and comes in several flavors, including a popular Plain version. Parmela Creamery’s nutmilk cheeses are cultured and aged, available in Mozzarella-Style and Sharp Cheddar-Style Shreds, and several kinds of cheese slices including Pepper Jack-Style. (Photo via Kite Hill)

3. Harissa: In case you haven’t heard of harissa, this Moroccan spice is poised to take the place of Sriracha, according to Casablanca Market, because of its ability to add heat without changing the intent of a recipe. This brand’s harissa uses the founder’s recipe and comes in jars. Over at Eliot’s Adult Nut Butters, harissa has made its way into cashew butter. The Spice Hunter sells harissa under the name of “Spicy Garlic Powder” and was serving up Bloody Mary’s featuring it. cHarissa sells it in spice rubs and sauces. Mesa de Vida’s line of healthy cooking sauces includes a harissa version too. (Photo via Casablanca Market)

4. Sorghum: Get ready to see sorghum in crackers and chips. This naturally gluten-free grain is drought-resistant and nutrient-dense, making it an optimal choice for Vegan Rob’s in Beet Puffs and Jackfruit Puffs. Primizie Snacks includes it in its flatbread crisps, the most notable flavor being the Green Harvest Chips flavored with kale, broccoli, and spinach. Edison Grainery is using sorghum, nutty in flavor and full of fiber, to make its Sorghum Flakes cereal with one ingredient, and two kinds of pasta, including its new White Sorghum Penne and Alphabet Pasta. Note that sorghum can also go by another name: milo. Stay tuned for Way Better Snacks’ brand new Sorghum Crackers that will feature sprouted flax, chia, broccoli, and daikon radish seeds. (Photo by Primizie Snacks)

6. Mushrooms: Mushrooms have slowly become mainstream. Four Sigmatic sampled its Mushroom Coffee, which is currently the number one instant coffee on Amazon, and its Mushroom Hot Cacao mix just clinched the number one hot cocoa mix spot on Amazon, both beating out the big players. Its hot mushroom drinks introduce an adaptogen approach into hot beverages, focusing on function and flavor. At Pan’s Mushroom Jerky, its jerky is soy-free and available in a Zesty Thai flavor, using shiitake mushrooms in a family recipe that has been tweaked to be organic. (Photo via Four Sigmatic)

7. Coconut Blends: While coconuts have been all the rage for the past several years, a few companies have begun mixing it with other ingredients to find the right blend. Cocavo out of New Zealand is blending coconut and avocado oils for a high-heat cooking oil with a mellow flavor profile. Flavors include Turmeric Lemon and Coriander Lime Ginger, available in stores nationwide. Califia Farms‘ line of six almond milk and coconut milk creamers comes in blends like Mexican Cocoa and Dulce de Leche. Bonus: They can be used in baking too. Nutpods from Green Grass Foods proudly announced a new foray into the refrigerated section of grocery stores, since its line of unsweetened half coconut milk and half almond milk creamers were previously only available on Amazon, where they nabbed the number one best-selling creamer spot on the behemoth shopping site. (Photo via Cocavo)

8. Vegan Butter: Miyoko’s Kitchen continues to dominate the vegan butter space with a European-style cultured vegan butter made of cashews, available at Trader Joe’s. Whereas FabaButter, coming soon and made by newcomer, Fora, introduces aquafaba (the brilliant soaking liquid in cans of chickpeas) as an emulsifier in its coconut-oil-based butter that melts and can be used any way you might use dairy butter. (Photo via Fora)

9. Vegan Egg and Egg Products: While vegan egg replacers are not new in the industry, seeing them present at the Fancy Food show was. Bob’s Red Mill’s is made with only four ingredients, and all the powder requires is a few tablespoons of water and minutes to whisk together eggs that can be scrambled or used in place of eggs in baking. Follow Your Heart launched a very tasty vegan garlic aioli as an addition to their Vegenaise line. They’re also in the process of making a few improvements to their vegan egg replacer that will be hitting stores later this spring. (Photo via Follow Your Heart)

10. Coffee Nut Butter:Noosh Brands sampled an almond butter with MCT oil. Noosh’s Bulletproof-Style Coffee Almond Butter was created to be Keto-friendly and is a surprisingly tasty sweet treat. Manna Organics said that by sprouting the almonds in its Espresso Almond Butter, it cuts some of the bitterness and makes the nutrients locked in the almonds bio-available. Sounds good, but even better — it tastes good. Abby’s Better Nut Butters also got in on the coffee almond butter trend with its addition. (Photo via Noosh)

11. Cassava: You’ll see more of this tuber in coming years. Made from yucca or manioc, cassava is a sweet root vegetable originating from South America. Plant Snacks makes Cassava Crunch Chips in several flavors, including a Beet With Goat Cheese, reformulated to be vegan. According to the company, the chips are good for digestion and contain a low FODMAP. Vegan Rob’s Cassava Chips have a light crisp texture and also fit into a Keto diet or Paleo lifestyle. (Photo via Plant Snacks)

12. Dairy-Free Frozen Desserts: Dairy-free and delicious, Jeni’s Splendid Ice Creams introduced its new Dark Chocolate Truffle Ice Cream, a decadent treat made of fair-trade cocoa with a hint of coconut cream, and Frosé Sorbet that tastes like summer fruit and a chilled glass of rosé. Brand new player, Izza Pops, just launched plant-based popsicles at the show, available in three flavors, including a simply delicious Coconut Vanilla, each sweetened with maple syrup and containing no stabilizers, positioning themselves to be the Rx Bars of ice cream. (Photo via Izza Pops)

13. Savory Spice:Jada Spice’s all-vegan line of savory “Chicken Salt” is MSG-free and non-GMO — and the seasoning of choice at UCLA dining. Sister to pink Himalayan salt, black salt caused a stir at Edison Grainery. The sulfur in black salt makes its aroma and flavor a bit like eggs, making it a popular and crucial ingredient for whipping up tofu scrambles. (Photo via Jada Spice)

From Your Site Articles
Annelies Zijderveld
Annelies Zijderveld is the author of Steeped: Recipes Infused with Tea. Her food writing and photos have been featured in Paste Magazine, The Kitchn, TODAY, Darling Magazine, AllRecipes, and other publications, She whisks together food and poetry on her blog, The Food Poet, and on Instagram at @anneliesz.
Online Shopping
Food News
Online ShoppingShoppingVegan Recipes
The Conversation