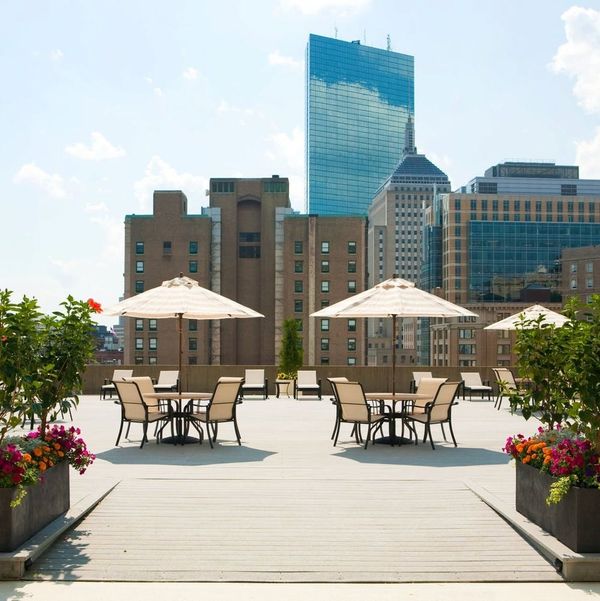 We finally have our two Super Bowl contenders in New England (home of Boston) and Seattle, both cities that we love to visit. Since we like to be good sports when it comes to rivalries, we started thinking: What could bring these two coasts together? Making, of course! Whether you’re flying into Boston to watch the Superbowl with die-hard fans or you’re in town for vacation, we’re sharing our favorite spots for the ultimate maker experience. From unique hotels and creative dining options to top handmade shops and inspiring sights, Beantown has it all.

1. Liberty Hotel: Historical landmarks are pretty much a given in one of America’s oldest cities, but this isn’t just any old renovated colonial building. This hotel was formerly the Charles Street Jail, and they most definitely are not trying to hide that fact. An enormous octagonal atrium shows off the catwalks, the lobby bar still has jail cells and the prison yard is now a landscaped garden. It’s the perfect blend of historic and contemporary.

2. Revere Hotel: Just off the Boston Common, it doesn’t get much more central than these modern digs. They focus on supplying local amenities and products, so from the soaps to the room art to your whiskey at the bar, you’ll get to enjoy Boston-made goods.

3. Summer Shack: With four locations of this quintessential New England restaurant, you don’t have an excuse to miss out on the lobster, voted best in the city. Try to score a seat at the impressively designed raw bar, where you can watch the shellfish shucking in action.

4. Island Creek Oyster Bar: It’s hard to choose just one favorite seafood spot in New England, but Boston Magazine has bestowed the honor on this upscale restaurant many years in a row. The restaurant is an extension of a local oyster farm, making this about as fresh of a seafood experience as you can get.

5. Area Four: Aside from being one of 2014’s top 50 restaurants in Boston, this casual eatery has fresh and handmade written all over it. Local purveyors supply the ingredients, and then the chefs put in some serious work. Take the pizzas for example — they use a 12-year-old starter in the dough, let it ferment for three days and top it with hand-pulled mozzarella. It’s totally worth the wait.

6. Journeyman: One reviewer described the husband-and-wife owners of this Somerville spot as “the kind of people who frequently create dinner parties in their own home, feasts of innovation and great labor.” In other words, they’re our kind of people. If you’re feeling adventurous, this menu-less restaurant (housed in a former pasta sauce factory, no less) is for you.

7. Flour Bakery & Café: Most dessert seekers head to Mike’s Pastry in the North End, and while that’s the best spot for cannolis, bakers should also check out one of Flour’s four locations. After all, owner Joanne Chang won the year’s award for the best chocolate chip cookie, and that’s no small feat. Bonus: You can take baking classes here to learn the tricks of the trade.

9. The Publick House: Who’s up for a beer? You’ll be spoilt for choice at this Brookline pub, which offers somewhere around 200 varieties, and the bartenders actually know what they’re talking about. They’ve also won accolades for best mac & cheese and best fries, so it’s a good spot to grab some snacks too. (via Travlr and Food and Wine).

10. Drink: Restauranteur Barbara Lynch’s mixology haven is getting all the buzz. It sports the industrial, exposed-brick look common in bars today, but with a drinks menu that’s anything but common. Austrian walnut liqueurs, genever and house-made bitters are just some of the unusual ingredients. Oh, and the ice? It’s a 50-lb. block specially sourced from a local icehouse. Now THAT’S handmade. (via Star Chefs)

11. South End Open Market: Can it be May already? That’s when this huge Sunday market starts up again, featuring art, clothes, accessories, housewares, gourmet eats, flowers and more handmade goodness from around the area. There are also markets to be found near Harvard, the Rose Kennedy Greenway and Salem for those getting out of the city.

12. Makerbot Store: How could we possibly pass up one of the only Makerbot retail stores in the country? You’ll be like a kid in a candy store — no really, it has a gum ball machine full of 3D-printed goodies. Plus, it offers a 360 degree scanner, in-store demos and classes.

13. Magpie: Ever wish you could just live inside the pages of Etsy? You kinda can at this independently-owned and perfectly-named Davis Square shop, full of goodies like stationery, jewelry, prints and silkscreened apparel. Check out Magpie’s Facebook page for a look at all the fab gifts we’re dying to get our hands on.

14. The Garment District: Fashionistas and discount shoppers, the Garment District is your mecca. It buys, sells and recycles used and vintage clothing, resulting in one of the most fun ways to shop through the decades. If you’ve already got a project in mind, get there early to shop By The Pound, break out the sewing machine and turn that bag of random fabrics into your own creations.

15. Olives and Grace: This boutique’s tagline is “a curtsy to the makers,” so you KNOW we are onboard. Not only does owner Sofi Madison stock artisan gifts and foods from around the country, but she also invites you to meet the makers through her company’s website. She’s a girl after our own heart.

16. Samuel Adams Brewery: If you’re loving the American craft brew movement as much as we are, you’ve really got to thank the Boston Beer Company for giving it such momentum. Head to Jamaica Plain to get the history of the beer’s namesake, learn about the recipes and of course, sample a few. (via Boston Brew Tours)

17. Artisan’s Asylum: Got a creative idea that just can’t wait? This is a non-profit community studio in Somerville that provides access to the space and tools needed to practice your craft. There are also classes in everything from robotics to screen printing.

18. Museum of Science: Every kid who grew up in Massachusetts will tell you that this place is the coolest, so it’s an ideal outing if you’re touring Boston with the family. But the real secret is that this place is awesome for grownups too. They have a five-story-tall IMAX Dome screen, a planetarium, full-motion simulator and other exhibits that prove you’re never too old to learn.

Molly Griffin
Molly is a writer and editor from Boston who loves traveling, eating and occasionally being a little too candid. She lived in Dublin, Ireland for the last four years but recently moved to San Francisco to escape the rain. Now, she’s on the lookout for a good proper pub.
Shopping
Home News
Shopping
More From Home News