This 8th Grader Built a Braille Printer Out of LEGOs 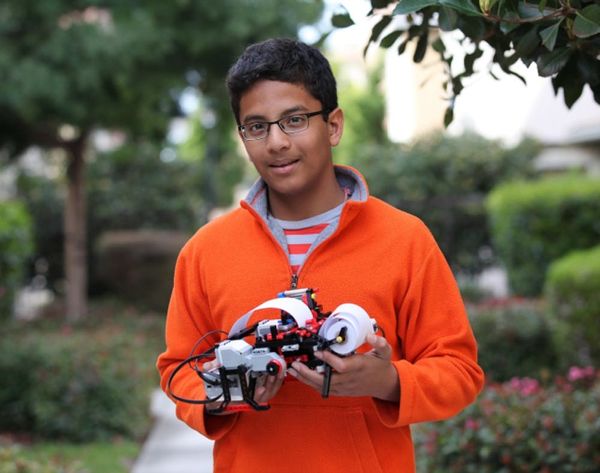 Is there anything you can’t do with LEGOs? In the past month alone, we’ve seen a German artist build a LEGO wall to declutter his studio and a Scottish teen animate iconic movie scenes. And now, some kid went and made a braille printer with those little building blocks.

Shubham Banerjee, the 13-year-old founder of Braigo Labs Inc., was inspired by a fundraising flyer that he found in the mailbox last December: “I noticed those posts that said, ‘Help the blind people with donations.’ I had no idea about braille, so I asked my parents how blind people read and they said, ‘Google it!'” (Touche, parents.) The Santa Clara, CA teen got to work and in February, he invented an open source DIY braille printer, Braigo, using a LEGO MINDSTORMS set ($350).

Shubham’s LEGO prototype received praise from parents of blind children and blind organizations looking to buy a consumer version, so naturally he spent his summer vacation building a more efficient prototype with Intel’s new Edison chip. He released Braigo V2.0 at Intel Developer Forum 2014 and received seed funding from Intel to continue Braigo’s product development and research. The money came as a bit of shock to Banerjee, who had been working with the $35,000 his parents gave him. Yup, what started as a science fair project is now a full-fledged business helmed by a CEO half your age.

And as the whip-smart teen acknowledged in a press release, “Intel Capital’s investment will help open up opportunities for me to work with professionals and eventually bring the product to more than 50 million blind people worldwide.” Pretty cool stuff.

This isn’t all going unnoticed by LEGO either. Michael McNally, senior director of brand relations for LEGO Systems, stated “We continue to be amazed by inventors of all ages who utilize the MINDSTORMS platform to express their creativity, building everything from robotic pets to robots that solve real life needs, like Shubham’s inventive Braille printer.” McNally made a call for kids around the world to follow Shubham’s lead and to use the tools/toys around them to make the world we live in a better place.

What do you think of Shubham’s LEGO braille printer? Sound off in the comments!

Maureen Luyun
Maureen is a writer and brunch enthusiast laughing way too loudly in Texas. If she isn't voraciously turning the pages of the latest celebrity memoir, she's probably picking up a new skill to use for a DIY project. Shopping (online and off) is her cardio, and as an avid advocate for the handwritten note, she loves to send (and receive) snail mail. Like Kanye West once tweeted, sometimes she gets emotional over fonts.
intel
Tech
intel lego
More From Tech