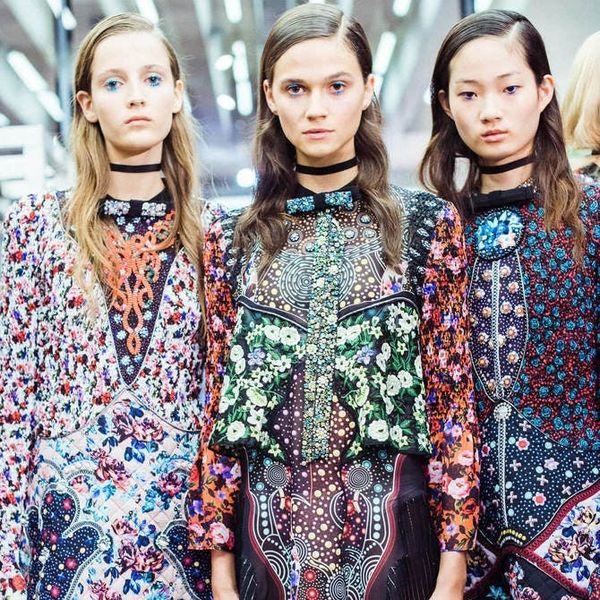 The nominees for the British Fashion Awards have been revealed, and the list of designers joining the ranks are, of course, impressive. Fashion heavy-hitters like Christopher Kane, Erdem and Tom Ford nailed it with two nominations each, but it’s all the newcomers and lesser-known names that really grabbed our attention (sorry, VB). Cited as the next big thing in the sartorial world, these designers are knocking it out of the park with their fresh and innovative threads. If you’ve yet to come across to this crop of talented designers, consider this your formal introduction. Meet your soon-to-be fashion faves below.

Why you’ll love her: Okay, so you don’t exactly nail an Adidas partnership by flying under the radar, which hints that this Greek national and Central Saint Martins grad is no newbie (she’s been killing the LFW catwalk since 2009). That being said, her unique signature textiles and contemporary feminine silhouettes are constantly evolving and never cease to amaze. If you’re obsessed with bright color and bold prints, Katrantzou is your woman. (via Mary Katrantzou)

Why you’ll love her: If you’re a firm believer that statement-making extras are what really make an outfit unique, you’ll love Charlotte Simone’s standout accessories. Having already wooed some of the top street-style stars out there, her fluffy, colorful accessories have started gaining some serious momentum — even spurring high-fashion street brands to create their own set of lookalikes. (via Charlotte Simone)

Why you’ll love her: In a world where fast fashion reigns supreme, Faustine Steinmetz stands out, taking a meticulous and incredibly thoughtful approach to each and every design. She spins, dyes and weaves all of her own fabrics and pushes the envelope with recycled materials and unexpected details. Her homegrown slow fashion and innovative edge should be high on your sartorial priority list. (Photo by Stuart C. Wilson/Getty)

Why you’ll love him: Looking for clean lines and modern design? Thomas Tait is your man. The spectrum of color in his collections might be minimal, but the embellishments are eye-catching and impactful. Just look at those crazy-cool studded leggings! (Photo by Stuart C. Wilson/Getty)

What she’s nominated for: Establishment Designer

Why you’ll love her: Howell has been doing the design thing for years, but she isn’t quite a household name like some of the other nominees. Her clothes perfectly fuse the modern and the classic, with lived-in masculine silhouettes with an undeniable feminine quality. Margaret Howell’s designs were made for the girl that focuses on style rather than fashion and wants versatile pieces that she can work into her own personal aesthetic. (Photo by Tristan Fewings/Getty)

Why you’ll love her: Playful punk with a whimsical, boho edge (think: sheer layered skirts, neon and plaid paired with flirty silhouettes) is what Molly Goddard is all about. She’s a sure-fire soon-to-be fave for girls that won’t be defined by a single sartorial style. (Photo by Miles Willis/Getty)

Why you’ll love him: Craig Green is known for his utilitarian designs that blur gender lines — you won’t find any fluff or frills here. Ideal for girls who are all about that androgyny, his designs manage to strike just the right balance of complex and casual by using strategic layering and the occasional pop of bright color. (via Craig Green)

Why you’ll love him: For the girl with a free-wheelin’ style with an elegant edge, Fernando Jorge’s accessories offer the ultimate finishing touch. The designer uses fluid design and gemstones and minerals often overlooked in his home country of Brazil to create one-of-a-kind pieces that will stand the test of time. (via Fernando Jorge)

Why you’ll love her: Talk about a stunner! Emilia Wickstead’s ladylike silhouettes with a contemporary twist are great for the modern femme with an appreciation for the classics. They’re totally work appropriate but will stand the test of time. (via Emilia Wickstead)

Is there a designer you love that deserves some major cred? Tell us about them in the comments!

Libby MacCarthy
Libby MacCarthy is an urban planner turned writer with a love (bordering on unhealthy obsession) of all things fashion and beauty related. She lives for perfectly brewed coffee, farmer's markets, dinner parties and perusing impeccably designed boutiques. When she's not on the hunt for the latest trends, you'll likely find her plotting her next adventure or nose deep in a book. Libby currently splits her time between the East Coast and her adopted home of France. Follow her daily adventures on Instagram.
Designers
Fashion
Designers
More From Fashion