50 Cat Halloween Costumes That Are Purr-fect 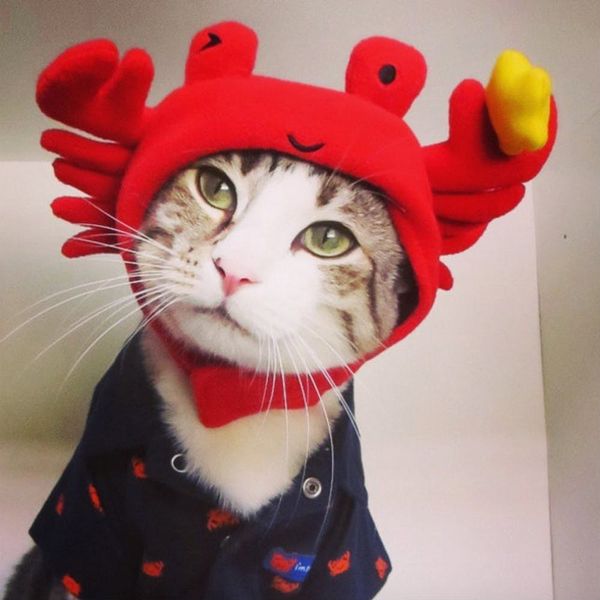 Remember those funny Halloween costumes we’ve been laughing about for days? Well, we’ve discovered something even better: pretty much any costume on a cat. Halloween isn’t only about creepy or clever costumes, face-transforming makeup and all that fake gore. It’s also about some of the warm and fuzzy parts of life too — like forcing your feline friend into a mini-outfit. So in the name of October 31 shenanigans, get a few laughs in while enjoying these cats in get-ups. And then really think through whether or not your kitty will turn your house into a crime scene if you make her part of the group Halloween costume this year.

1. Octo-Cat: Give your meow six more legs and a sparkly underwater costume for max cuteness.

2. Franken-Cat: We love this feline twist on the classic horror film! Have more kit kats? Dress them up as Bride of Franken-Cat and Dracula and you’ve got the whole crew!

Trixie is NOT impressed with this costume! Lol I bought her 2 new costumes this year, but she hated the teddy bear so I'll probably take it back! _____ Actually I shouldn't have bought it. It's funny but not original so it won't work for her costume contests this year. _____ I'm making her a witches cape to match her hat from last year for this week's contest. I also need to make a dress for her CleoCatra costume for the pet expo contest. (She was not happy with getting 3rd place last year! 😂)

4. Teddy Bear Cat: Can your little furry friend get any furrier and more squeezable? Apparently so!

6. Sphinx Cat: Your BB will walk like an Egyptian when you make her into a gorgeous kitty kween.

7. Sombrero Cat: Sombrero Cat is the next internet sensation — we’re sure of it. Because a cat in a sombrero is always a good idea. (via The Berry)

8. Old Hollywood Cat: Ah, this cat captures the raw emotion and vintage charm of Old Hollywood glamour at the bathhouse. We think that shower cap is totally retro-chic. (via Tumblr)

9. Elephant Cat: A more sophisticated elephant has never before graced the internet! Crossing her paws, no less. (via The Kitty Bloger)

10. “I’m Not Famous” Cat: Remember when Shia LaBeouf stuck a paper bag on his head that read, “I’m Not Famous Anymore?” Well, we think that if that’s the look this cat is going for, it’s rocking it. (via Attack of the Cute)

11. Thanksgiving Cat: If you thought Thanksgiving was about gratitude, you were wrong. One look at this cat’s face tells the true story! (via Attack of the Cute/Fox in the Pine)

12. Your Fright Shop Cat Police Costume ($19): Don’t mess with this guy. We’re pretty sure that’s a miniature cat-taser (AKA claws) in his paw.

13. Super Cat: Wow! This is one of the best action shots we’ve ever seen. This cat should totally be a cape model. (via Woman’s Day)

14. Goat Cat: This cat really does make for an adorable goat, even if he looks a little sad about his posing duties. We think this costume is a keeper. (via Woman’s Day)

15. Unicorn Cat: Yass. We’re hoping to see many more unicorn kitties this Halloween. The doll-rider is optional (depending on how tolerant your kitty is).

16. Hamburger Cat: We’ll take one with everything including the whiskers!

17. Harley Cat: Harley Quinn costumes aren’t just for people anymore. Your fur-covered friend can be a tricky villain too, now!

18. Hipster Cat: What a cutie! Even if you can’t find perfectly sized cat glasses, don’t give up hope. We’re sure the cat-sized beanie of your dreams is out there somewhere! (via Teal + Tea)

19. St. Catty: This punny kitty is dressed up in honor of St. Patrick’s Day. We think he does such a fine impersonation that a name-change for the holiday should be considered — “St. Catty’s Day” sounds about right. This costume is purr-fect for Halloween too. (via The Dainty Squid)

20. Lobster Cat: This costume is hilarious and also a little bit sad (for the cat and all lobsters everywhere). Brownie points for the awesome photo shoot skills, though. (via Kitty Bloger)

21. Cat in a (Sun) Hat: What a cute way to feminize the classic cat-in-a-hat idea. This punny costume is a winner. (via urbanashi813)

22. Bunny-Ears Cat: While the hat and ears are the costume, let’s not underestimate this cat’s wonderful modeling skills. He gives the Energizer Bunny a run for his money. (via Urbanashi813)

23. Bunny Cat: This cat is the very picture of relaxation. We’re going to be happy about this picture for days. (via Mel Cat)

24. Pawsome Couture Amazing Minions Cat Costume ($50): These are the most adorable minions we’ve ever seen. The costumes work best with more than one. We’re completely obsessed.

25. Explorer Cat: Here’s the front view of a cat in a sun hat. We think this little guy looks like an explorer. Indi-catta Jones, anyone? Anyone? (via Sisin Maru)

26. Steampunk Cat: Grab a hat, cut some ear-holes and attach clocks. What could be simpler? (via Steampunk Steampunk)

27. Meowington’s Bumble Bee Cat Costume ($48): Awwwwww! This costume is worth it for the little pom-poms on the hood. (via Meowingtons)

28. DIY Chef Cat: This cat is not about to let Ratatouille have all the fun. (via HGTV)

29. Pilgrim Cat: Wow! This cat needs to meet Thanksgiving Cat. We are so impressed with her detailed costume and posing skills. (via Give It Love)

31. Suddenly Cat Pirate Costume ($25): This pirate costume is amazing. Plus, film your cat running and turn it into a GIF; it might just go viral. Oh wait, that’s been done.

32. Kitty MD: Yes! If you’ve missed E.R. or Grey’s Anatomy’s early days, here’s a way to make lemonade out of lemons. (via The Chive)

33. Cat-Cow: Calling all yogis! Get punny with your cat and dress him up as one of the classic cat-cow postures.

34. Tiger Cub: This little Bengal already looks the part! We are so in love with the adorable mane-d look.

35. Harry Paw-ter: Woohoo! Finally, a costume for Potterheads that truly does the series justice. Getting your pet in on the action is the best idea yet.

36. Woody from Toy Story: Any Pixar lover’s cat costume dream. The fact that this cat is busting out of its Woody costume makes it even funnier.

37. Mario: Any cat can dress up as Mario or Luigi, but not just any cat will have the perfect mustache marking to match.

38. Batman and Joker: The Joker has totally mastered the evil-crazy look. We’re not confident that Batman’s gonna win this round, but the pictures you’ll take will be priceless.

39. Devil Cat: How could something so cute be evil? Oh, it’s possible. All it takes is dressing your cat in a costume to find out.

You are what you eat. #catincostume

40. “Hot Dog” Cat: Or a “Hot Cat.” There’s nothing like a play on words to get the Halloween puns flowing.

41. Santa Cat: This costume had us at the Santa Hat — and then we saw the beard. Maybe you’ll get to use this costume during both holidays.

42. Eeyore Cat: How much do you love the adorable downer from the Winnie the Pooh books? We’re guessing a lot. And this cat makes for an adorable Eeyore.

43. Monsters: “I am adorable. Hear me roar!” What do you think he’s really saying?

Meow the force be with you! #nofilter #starwarslover #fangirl #catlady #catcostumes #notmycat

44. Princess Leia: Your cat was as excited as you for Leia’s return, right? Meow the force be with you!

Seriously thinking about #halloween already. 🎃 We do it right in this family👻 this is my cat as #stevezissou from #wesanderson 's #lifeaquatic already thinking about this years costumes 😁 #billmurray eat your heart out 🔮 #catsofig #cats #mycat #catcostumes #jasperwhitlockhalegonzalez

45. The Life Aquatic Costume: Wes Anderson fan? Us too. This Steve Zissou costume makes for one cool cat. Seriously.

46. Batman Cat: Here’s one cat costume that lets Gotham (and the rest of us) sleep at night.

47. Dragon: This ferocious feline can’t help it if he looks like the cutest dragon ever. So adorable.

48. Crab: For the extra crabby kitty in your life. Bonus points for his adorable tiny shirt.

49. Dinosaur: Here’s a take on Catzilla that’ll win you some favor this Halloween. We’re willing to bet this dino-cat makes for one awesome snuggle buddy.

50. Donald Trump: Make America great again — with this cat costume. Honestly, though, this is a really good start!

Do you have your own feline friend who looks fabulous in a Halloween Costume? Show us on Pinterest!