Celeb Babies of 2017 Who Are Already More Famous Than You 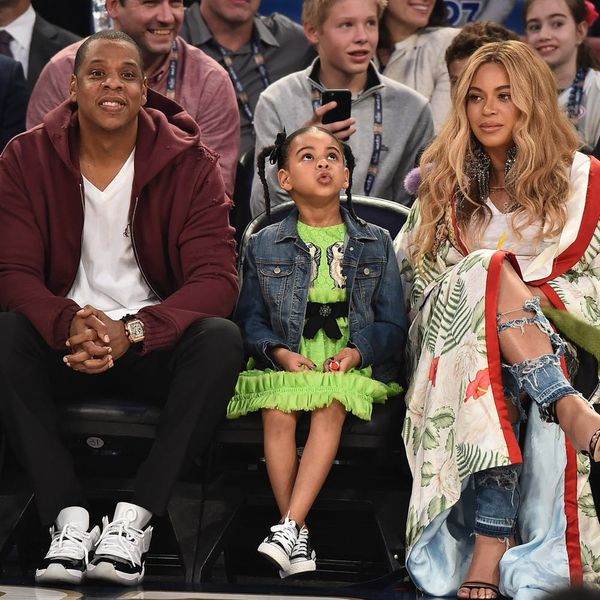 Let’s just say it: 2017 is the year of the celebrity baby. In just the first three months, we’ve seen Janet Jackson become a first-time mom at age 50, Helen Lasichanh and Pharrell Williams say hello to triplets, Amber Tamblyn and David Cross show off a new daughter with the most epically hilarious (and fake… we think) name, and Natalie Portman and Benjamin Millepied welcome an undoubtedly talented baby number two.

Here are the future movie stars, superheroes, humanitarians, and recording artists coming our way. We don’t know what’s in the water, but we hope Hollywood keeps hydrating.

1. Beyonce and Jay-Z: It was the Instagram heard ’round the world when power couple Bey and Jay announced that they were gifting the universe with not only one, but two, Beybies this year. If the twins follow in the footsteps of big sister Blue Ivy, who at just five years old upstaged everyone at the Grammys in a pink Gucci suit and has her name trademarked for a possible future (and likely best-selling) line of beauty products, it’s clear that it’s the Carters who run the world. Update: The twins, a boy and girl named Sir and Rumi, arrived June 13 and almost took down the Twittersphere with excitement.

2. Amal and George Clooney: The high-profile international and human rights lawyer and her former ER star husband announced in January that they too are expecting twins. It’s as if, after the abomination that was 2016, celebs have taken it upon themselves to repopulate the world with amazing global citizens, two at a time. Activism runs in the family, so when the family isn’t spending time at their British countryside manor or vacationing on Lake Como, we expect the littlest Clooneys to be out saving the world. Update: Twins Ella and Alexander arrived happy and healthy on June 6. (Photo via Pascal Le Segretain/Getty)

And then we were four... She is here, Maya. I feel so complete blessed and thankful for all the Wonders in my life #family #newborn #grateful

4. Sophie Hunter and Benedict Cumberbatch: The couple revealed at the October 2016 premiere of Doctor Strange that they are adding to their Cumberbrood this year. With genes like these — Mom is an accomplished theater director fluent in French and Italian, and Dad (AKA the internet’s boyfriend) has transformed into everything from a dragon to a genius superhero — Cumberbaby number two is destined for greatness. Update: Baby Hal was Cumberborn on March 3. (Photo via Valerie Macon/Getty)

5. Lauren Conrad and William Tell: Conrad, The Hills alum turned fashion designer, started 2017 with a new year, new baby announcement. Soon after, she shared pics of her baby bump along with her team’s favorite baby names on her blog. No doubt her effortless maternity style will inspire all women, bump or no bump. Update: Baby Liam joined the Tell family on July 5.

Chatting w/ @mydomaine about raising the next generation to embrace love, not hate: Although Sonny is too young to learn anything right now except that crying will get him changed and fed (he's only 3 weeks old ;)), my number one priority as a mom is to teach him right from wrong. Included in that giant life lesson, is the fact that people are defined by a large sum of different qualities, life experiences and backgrounds. Those who attempt to define people by the color of their skin are either afraid of the unknown or too lazy to do the real work it takes to know someone. If I can teach my son that it takes a lot more digging than just looking at someone to know their strength of character than I will have taught him a lesson worth passing on to the next generation. 📷: @colemoser

6. Whitney Port and Tim Rosenman: Port, another alum from The Hills (and now also a fashion designer) showed off her own adorable baby bump on Instagram and her blog shortly after her pal Conrad did. With this latest announcement, Baby Rosenman joins the rest of the next gen of The Hills, which includes Kristin Cavallari’s three kids and Audrina Patridge’s daughter. Update: Baby Sonny made his debut on July 27.

7. Rosee Huntington-Whiteley and Jason Statham: The former Victoria’s Secret angel took to Instagram to reveal her baby bump in a way only a model could — casually sitting on a beach in a Missoni bikini. Huntington-Whiteley and her fast-driving actor fiance met on the set of Transformers in 2011 and revealed their engagement last year. Update: And little Jack Oscar Statham made three on June 24.

8. Marion Cotillard and Guillaume Canet: The Oscar-winning actress wrote a lengthy Instagram post that both shut down rumors she was having an affair with Brad Pitt and confirmed the pregnancy of her second child with her actor/director partner (the couple already have a son, Marcel). And she did it in two languages. Bien sûr. Update: The couple’s baby girl said Bonjour on March 10.

On Wednesday 22nd March Liam and I became parents to an incredibly beautiful, healthy baby boy, weighing 7lb 9 and looking like a dream. Although he still doesn't have a name he is already stealing hearts. We are all madly in love and overwhelmingly happy with our little arrival. Happy Mother's Day to all the mothers around the world. A day that now has a different meaning to me forever 💙

9. Cheryl Cole and Liam Payne: The pop singer and boy band cutie crossed paths twice on The X-Factor — she was a judge in 2008, when he auditioned solo, and again in 2010, when he was 1/5 of the phenomenon that became One Direction. Cole confirmed the pregnancy on Instagram while shooting an ad for L’Oreal, and this will be the second 1Der baby (Louis Tomlinson welcomed son Freddie last year) to light up the world like nobody else. Update: Cole had the ultimate (UK) Mother’s Day gift when their son Bear arrived on March 22.

10. Amanda Seyfried and Thomas Sadoski: The couple announced their engagement in September and their pregnancy shortly after, and the duo just starred in the film The Last Word (where they began their romance) together. No word yet if the baby will wear pink on Wednesdays. Update: The couple confirmed they low-key eloped AND had their baby girl in March. (Photo via Pascal Le Segretain/Getty)

11. Ciara and Russell Wilson: In October, the R&B singer announced via Instagram that she was getting the greatest birthday gift: a new baby with her NFLer husband (Ciara also has a son, Future, Jr., from a previous relationship with rapper Future). With both a Superbowl trophy and a Grammy in the household, Baby Wilson is #winning. Update: Little Sienna Princess Wilson was born on April 28.

Billy is three months old today and doing great. Thanks for all your love & support and please remind your Congresspeople that every kid deserves the care Billy got.

12. Molly McNearney and Jimmy Kimmel: Last December, the late-night host used his show’s monologue to announce that he and his screenwriter wife are expecting their second child. Kimmel said they are waiting until birth to find out the gender of the baby and joked that he’s been trying to think of unisex names. “So far, all I’ve come up with is Dyson, after the vacuum, or Jelatin with a ‘J’.” We can’t wait to meet little Jelly Kimmel. Update: William John Kimmel was born on April 21, and despite a health scare related to a heart murmur, baby Billy had surgery and is now recovering.

13. Laura Prepon and Ben Foster: The low-key couple got engaged last October (and they have been friends since they were 18!), and in January, confirmed that their first child was on the way. OITNB has been renewed for the next three seasons, so maybe we’ll see a new face visiting Litchfield in the near future. Update: The couple welcomed a baby girl in August. (Photo via Dimitrios Kambouris/Getty)

Please welcome Odette Elliott Padalecki to the world y'all !!! Gen and I wanted to celebrate this special occasion by raising funds and awareness for two of her favorite causes! @nowandgen has collaborated with @popandsuki to release a (very) limited edition leather heart that you can monogram like Odette's :) Please help us spread the love!! Go to popandsuki.com/padalecki (link in bio) they will be gone soon :)) #SPNfamily

14. Genevieve Cortese and Jared Paladecki: The Supernatural co-stars are welcoming baby number three (the couple already has two sons, Thomas and Shepherd) this year. Regardless if you’re #TeamDean or not, we’ll raise a cup (or three) of coffee to the growing family. Update: Baby girl Odette Elliott joined the family on March 17.

15. Zooey Deschanel and Jacob Pechenik: There’s a new girl (or boy) on the way for the actress and her producer husband. Self-professed animal lover Deschanel admitted that they “went a little bit wild” with their first daughter’s middle name, Elsie Otter, naming her after the super playful animal. Here’s hoping Dolphin or Penguin is next. Update: The couple did not disappoint with an animal themed middle name: son Charlie Wolf arrived in May. (Photo via David Livingston/Getty).

16. Irina Shayk and Bradley Cooper: The Victoria Secret model and Oscar nominee revealed in November that they were expecting their first child together. The private yet PDA-filled jet-setting couple has been dating since 2015. Update: The couple welcomed a daughter, Lea de Seine Shayk Cooper, to the world on March 21. (Photo via David M. Benett/Getty)