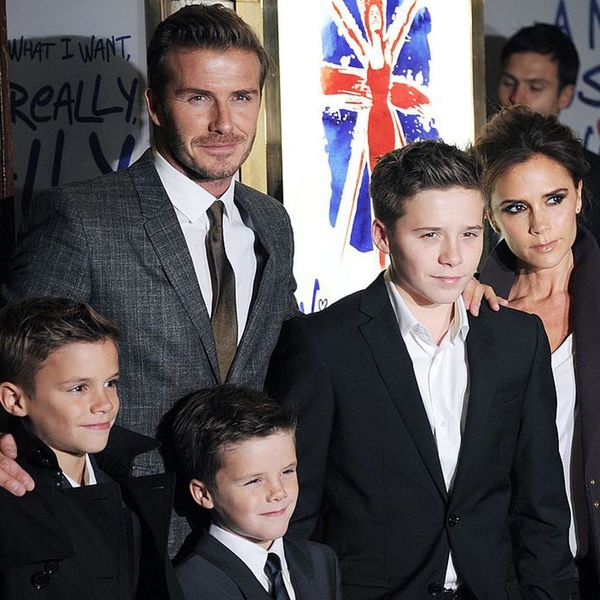 1. Wolfgang Frances, Bellamy Nicole, Tallulah Louise, Breaker Owsley, Five Beck, Holleder Street and Major Robert: Robert and Cortney Novogratz are a design team known for a quirky, fearless mix of vintage and modern. The same can be said of the names they’ve chosen for their seven children, including two sets of twins. There’s a story behind every one of the kids’ names. (Photo via Rachel Murray/Getty)

2. Maddox Chivan, Pax Thien, Zahara Marley, Shiloh Nouvel, Knox Leon and Vivienne Marcheline: No list of big families headed by famous parents would be complete without the Jolie-Pitts. Angelina and Brad’s brood includes children adopted internationally, and their names reflect a global, eclectic style. They’ve also been some of the most influential choices in Hollywood. Maddox, Knox and Vivienne all soared in the rankings following the name announcements.

3. Brooklyn Joseph, Romeo James, Cruz David and Harper Seven: David and Victoria Beckham have chosen names with personal significance. Cruz reflects their third son’s place of birth — Madrid. Harper was inspired by Victoria’s love of To Kill a Mockingbird. Many assumed that Seven referred to Dad’s jersey number, or perhaps her July birth, but the couple later revealed that it was because of the association between the number seven and good fortune. (Photo via Stuart C. Wilson/Getty)

4. Ralph, Maude, Olive, Oscar, Betty and June: Blogger Gabrielle Blair writes about the intersection between motherhood and style at DesignMom. No surprise, then, that she and husband Ben Blair gave their six children retro-cool names.

6. Ezra, Penny, River, Viggo and Willa: The musical Hanson brothers have grown up to be great baby namers as they’ve started families of their own. Jordan Taylor — known by his middle — married Natalie, and together they have Jordan Ezra (known as Ezra), Penelope Anne, River Samuel, Viggo Moriah and Wilhelmina Jane. It’s a sweetly vintage sibset. Brother Isaac and wife Nicole also have a nicely named family: Clarke Everett (known as Everett), James Monroe and Nina Odette.

9. Luke Hudson, Eve Augusta, Poppy James and Josephine Kate: Grey’s Anatomy star Jessica Capshaw — the daughter of actress Kate Capshaw and stepdaughter of Steven Spielberg — recently welcomed her fourth child with husband Christopher Gavigan. The couple’s choices are a mix of the traditional and the trending, with a few unexpected surprises, like Eve and Poppy’s middle names. Josephine Kate makes the perfect addition to their family.

Which is your favorite set of big family baby names? Tweet us @BritandCo and let us know!