Check Out the Stunning Pics from This Summer’s Celeb Weddings 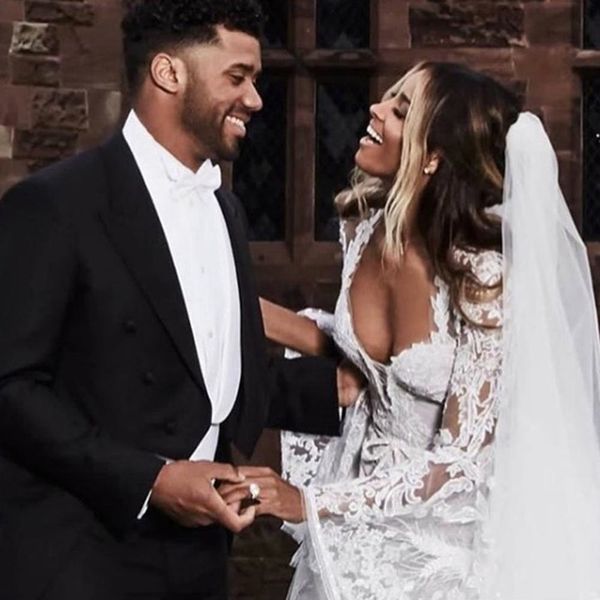 Summer is wedding season, as anyone in their 20s and 30s knows all too well. From old-school weddings to ones that buck tradition, whether you’re going uber-romantic and eloping or having everyone you know join in the fun, there’s just something about the summer that makes it perfect for consecrating a relationship. (Probably the warm weather!)

Of course, with celebrity weddings come gorgeous photos of the bridal parties, cakes and everything in between. But first and foremost have to be the couples themselves (natch) and the dresses. The dresses! Each one is stunning, but check them out for yourself.

You Are My Forever.

@Peter_Dundas I just want to take this moment to say THANK YOU for being a part making this day perfect for me, and bringing my dream dress to life!! All the, face time calls, meetings, sketches, multiple fittings from NY to Milan were worth it! You are the sweetest soul, and one of the most talented human beings I know. Love you. ❤️ Photo By @simonevankempen_photography

1. Ciara and Russell Wilson: Let’s start with the big one. Ciara wore couture Roberto Cavalli at her beautiful English wedding to Seattle Seahawks quarterback Russell Wilson, and the two definitely looked like royalty together.

Today is the one-month anniversary of being happily married to @AimeeMullins! #ilovemywife

3. Rupert Friend and Aimee Mullins: Rupert, known for his role on Homeland (and, cough, for being an ex of Keira Knightley), and model-athlete Aimee Mullins were wed in a *secret ceremony* last month. So romantic! Aimee wore a timeless tea-length Theyskens dress with a stunner of a neckline.

How quickly two months have flown by since @kaitlindday and @devinlucien's unforgettable day at @ventana_inn in Big Sur, CA. There is something so special...so powerful...so moving...when a bride and groom see one another for the first time on their wedding day. For us as documenters, we can only hope our couples let their guard down and let their emotions show. We're so thrilled and grateful Kaitlin and Devin did that, and the look in Kaitlin's eyes says it all of how special this moment was. #kaitlindoubleday #kaitlindevinday #empire #empirefox #bigsur #bigsurwedding #aevitasweddings #devinlucien #djdevinlucien #rhondalyon #ventanainn #weddingphotography #weddingphotographer #destinationwedding #celebritywedding #theknot #usweekly #etonline #wedding #weddingday #weddinginspiration #weddingphotoshoot #weddingphoto #lawedding #laweddingphotographer #ocweddingphotographer #californiawedding #firstlook #brideandgroom #theknot

4. Kaitlin Doubleday and Devin Lucien:Empire star Kaitlin Doubleday got hitched to Devin Lucien, a DJ, in Big Sur, California. Fans of Say Yes to the Dress will love that Kaitlin wore two dresses designed by Mark Zunino. The first is pictured above, and the second was a super-cute minidress for the reception. Major style inspo!

The extension of our love! Thank you guys for sharing this unforgettable moment with us ❤️❤️❤️ #mykarana Photo by @jeromeduran

A post shared by Ana Beatriz Barros El Chiaty (@anabeatrizbarrosofficial) on Jul 14, 2016 at 5:21am PDT

We want to thank everyone that came and shared this magical moment with us. So many amazing memories and so much love that we can't describe how we feel. Everyone will be in our hearts forever! Love you all! ❤️❤️❤️❤️ #mykarana #foreverlove #toomuchlove

A post shared by Ana Beatriz Barros El Chiaty (@anabeatrizbarrosofficial) on Jul 13, 2016 at 9:42am PDT

5. Ana Beatriz Barros and Karim El Chaity: Ana, a former Victoria’s Secret Angel, had been dating businessman Karim for three years before he popped the question on New Year’s Eve (awww!). The two married in Mykonos, surrounded by models, with Ana wearing a custom Valentino gown.

Who would design your dream wedding dress? Let us know @BritandCo on Twitter!

Tannara Yelland
Tannara is a freelance writer and editor, an occupation perfectly suited for her affection for drinking too much coffee and keeping odd hours. She usually writes about politics, economics, and pop culture. Some day she will put to use the hundreds of hours she's spent watching Say Yes to the Dress and write THE definitive analysis of the show.
Celebrity Wedding
Celebrity News
Celebrity Wedding
More From Celebrity News