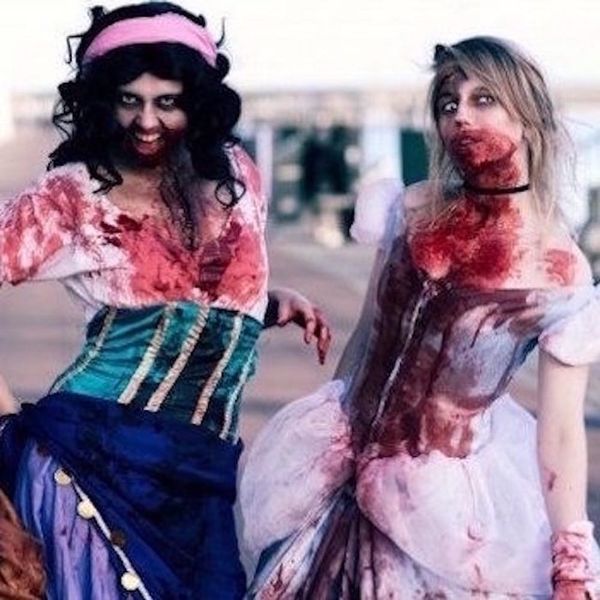 You don’t have to (still) be mourning the finale of The Walking Dead to want to take your undead look to the next level this Halloween. Since zombies are trending right now, the competition is stiff — and you’ll need to go that extra mile so that you don’t end up looking like just any #BasicZombie. So if you’re throwing together a zombie costume last-minute and need lots of inspiration (because, duh, “zombie apocalypse” is the best group costume ever), we’ve totally got you covered. Here are 22 incredibly scary-chic costumes that’ll guarantee you’re the hottest undead lady at the party.

2. Corpse Bride: Even if she’s technically a corpse, the fact that she’s undead qualifies her as a zombie, right? And this is one incredible make-up job — the monochromatic blue look contrasted with a bright pink lip manages to be supernatural and beautiful.

"Zombie Bride Tutorial" 👰🎃💀 Press play 🎥🎥🎥 #Repost @j_make_up with @repostapp. ・・・ [Zombie bride-tutorial] 🎃💍👰🏻 This is a very messy look and also very simple to do. The key is to not be very precise, which is a plus. 🙌🏼 You only need a white body paint, black, red and purple eyeshadows, fake eyelashes, eye liner, mascara and fake blood! 👌🏼I hope I gave you some tips, even though the video is only 15 sec long:/ ❤️ #jglam #j_make_up #halloween #halloweenmakeup #zombie #bride @makegirlz @slave2beauty #slave2beauty #makegirlz #makeuptutorial #hudabeauty #vegas_nay @vegas_nay @hudabeauty @makeup_clips #makeup_clips #HalloweenCostume #universodamaquiagem_oficial #universodamaquiagem

A post shared by UniversodaMaquiagem_Oficial (@universodamaquiagem_oficial) on Oct 9, 2015 at 12:01pm PDT

3. Zombie Bride: If you’d like to go for a more natural-looking zombie bride style (i.e. not blue, green or gray all over), check out this look. Dark plum makeup makes for an excellent sunken-looking ghoulish eye, and by using the same dark makeup on your chest and shoulders, you’ll end up looking covered in dirt… undead just in time for some candy corn.

A post shared by Halloween Makeup Ideas (@halloweenmakeupideas) on Nov 1, 2014 at 7:52am PDT

4. Pop Art Zombie: Just in case you didn’t believe us, the pop art zombie really is happening in a major way this year. This look gets super creative with eyelid makeup for the ultimate glazed zombie-stare in photos.

🌟 eyes : as a base I used a black liner over top I have urban decay blue shadow in clash . Blended out with hepcat , vibrant grape and stars and rocket all Mac shadowa My brows are Mac shadows in hepcat and vibrant grape ! Oh and inner corner gold reflects glitter also by Mac 🌟 lips : wet n wild lip stick In pinkerbell with pink glitter over top . 🌟face the scale like texture was created using fishnet tights and eyeshadow ! Shadows used were same as the eyes 🌟 my neck slash was created with liquid latex and tissue and blood from my local Halloween store

5. Zombie Mermaid: If you’re into the zombie vibes this Halloween, but you don’t want to sacrifice all the glitz and glam of a girly costume, the zombie mermaid might be a good option for you. She is most definitely a zombie, but she still looks pretty!

6. Zombie Pin-Up: The zombie pin-up girl is a truly creative idea. Combine your love of all things vintage with the signature looks of a zombie, and you’ve got yourself a photogenic keeper. (via Bingo Bongos)

7. McZombies: Speaking of brains, are you hungry? This is what a fast food zombie looks like… and it’s almost as scary as what’s actually in the meat. (via Cosplay Sleep Eat Play)

8. Zombie Nurses: These costumes are so creative! There’s nothing like an undead nurse to send chills down your spine. (via Diabolical Rabbit)

9. Zombie Hunter: With all the zombies running amok on Halloween, we should probably make sure there are a few zombie hunters to keep things interesting. Combat boots are a must. (via Polyvore)

11. Zombie Beauty Queen: This is similar to the idea of “prom zombie,” but with a slight twist. We’re just trying to figure out if she became a zombie before or after winning the pageant. (via Bustle)

12. Pop Art Zombie: Here’s a truly colorful way to make your zombie costume pop. And, no, we’re not even talking about the pop art makeup. (via The Meta Picture)

13. Zombie Apocalypse Family: Get your entire family in on the zombie action. This is what a family looks like after the zombie apocalypse has claimed them. (via Costume Works)

14. DIY Zombie Bride: We’ve got you covered if you’re looking for a step-by-step guide to creating a DIY zombie bride look. Hint: it involves a whole lotta blood splatters. (via Brit+Co)

15. Zombie Family: Here’s another post-apocalyptic zombie family. We like their “street-style” vibes and believable zombie-moves! (via Avianna Cosplay)

16. Zombie Hat ($45): Sometimes it’s a relief to just be able to throw on a hat. At the very least, you won’t have to worry about styling your hair. Add some black lipstick and it’s an instant outfit.

17. Pretty Zombie: Not only is this a sweet take on the classic zombie costume, but it’s an easy look to execute on a budget and to wear to work. (via Brit + Co)

18. Zombie Bridesmaids: We know all about the back-from-the-dead bride, but what about her badass bridesmaids? Forget the couples costume. Here’s a fun look for you and your favorite group of ladies. (via Costume Prize)

19. Zombie Bride Makeup: Step your pretty zombie up a notch with some fake blood! Take some tips from this video to add some gorgeous gore. (via Wonder How To)

20. Dead Flapper: The flapper girl costume has been done to death. And so what better way to go about it than to become a ’20s bride, hungry for brains? This look is super fun and would be much more moveable than strutting around in a giant gown all night long. (via The Uptown Bride)

21. Burton’s Doll: We gotta give it up for Tim Burton and his out-of-this-world imagination. This one will require really taking those false lashes to the next level. (via Ruby Tanjerine)

22. The Corpse Bride: Talk about the perfect ratio of gore and gorge! Plus the blue hair is totally on trend. (via Olivia Emily)

Do you have any other zombie-inspired ideas? Let us know on Pinterest!