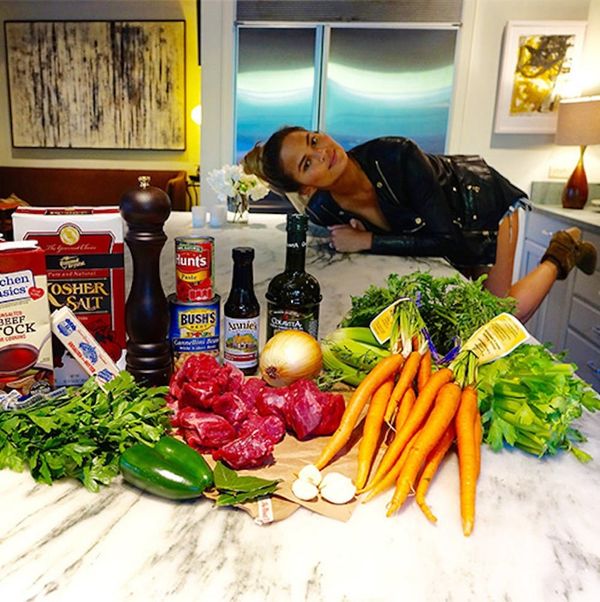 Model, TV personality, cookbook author and Mrs. John Legend Chrissy Teigen is under no illusions when it comes loving food — and having to work for her body. Her tagline on her blog, So Delushious! is “personal ramblings from a girl who loves bacon but who can’t be fat.” That basically says it all, and explains why America is totally obsessed with her.

She’s opened up about her pregnancy struggles, shared how she cries when she has to eat healthy and shut down haters on Twitter left and right. But we love when she (and John!) let loose in the kitchen, making everything from nachos to her mom’s Thai comfort food. For other expecting moms out there (or for those who are just craving comfort food!), here are seven of Chrissy’s most indulgent recipes for your most pressing food desires.

1. Sweet Potato Streusel Pie: Chrissy says that you could sub out for a store-bought crust, but she’s lazy and she can make this simple one herself. The key to a delicious silky pie? Sweetened condensed milk. Also, note how messy Chrissy’s counter is — this is no glossy blog that might tap into any reader insecurities. This is a real girl, really cooking.

2. Soft Pretzels with Spicy Salsa Dipping Cheese: Here she admits to loving the pretzels at Auntie Anne’s (who doesn’t!?), but a plane ticket seems like an awfully high price to get your paws on some soft pretzels. And that cheese dip? She admits to loving Velveeta so much she “wishes it came out a faucet,” just like the rest of us do.

3. Sleepytime Stew and Easy Smashed Potatoes: “One bowl and you’re out like a thumb-sucking baby,” claims Chrissy, who made this beef stew when she and the hubs went away for an anniversary weekend. Spoon it over red mashed potatoes and swoon. Sorry, John Legend not included.

4. Street Corn Salad: This recipe for Mexican street-style corn salad ranks high for Chrissy. She said she went “all giving up on life” and used carb-y sweet corn, which gives the salad a complexity of flavor along with cilantro, cayenne, lime, spicy mayo and, of course, cheese. She had us at carb-y anyway.

This woman speaks the truth: “Boursin is a fancy cheese for normal people.” She loves it, you love it, we all love it — and it helps keep chicken breasts moist and delectable (as does the proscuitto *and* bacon). Chrissy suggests pairing it with your favorite franchise of The Real Housewives.

If she could eat anything several times a day, Chrissy says she would eat a Sausage McMuffin with Egg. A) it tastes like heaven (duh), and B) she says it reminds her of her childhood in Washington state. Due to her intense random cravings for it, John took matters into his own hands, assembling them for her at home (he swears they only take 10 minutes). He acknowledges this isn’t really a recipe but since it’s at the top of his wife’s Food Hall of Fame, he figured he’d write it down. Swoon.

7. Katie Lee’s Logan County Patty Melts: “I use four slices of American cheese PER SANDWICH BECAUSE I’M CRAZY,” Chrissy proclaims. She says she serves it at any viewing parties she and John have at home, and it has all the elements of true comfort food: the aforementioned American cheese, ground beef, white bread and fixings.