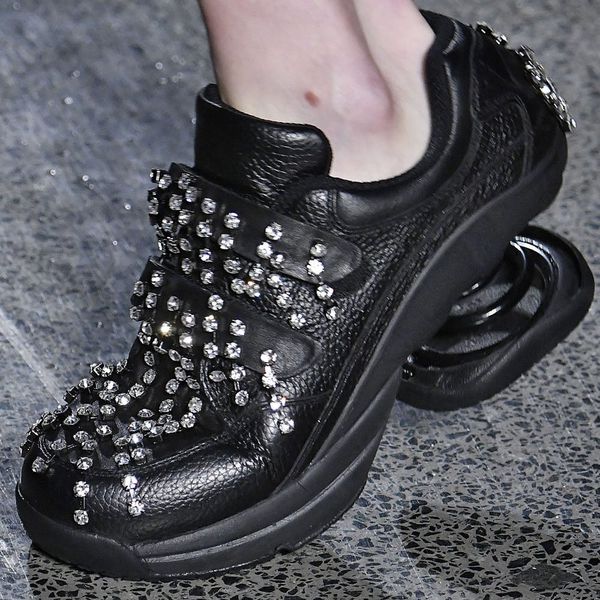 Christopher Kane made waves last year when he released pairs of $350 rock-encrusted Crocs created for his London Fashion Week runway show. Now, the famous designer has done it again, but this time he’s sprucing up an unexpected piece of footwear: orthopedic shoes.

According to Vogue, the Scottish designer teamed up with Z-Coil, an orthopedic footwear company, to create a blinged-out version of a shoe that looks like a mix between non-slip restaurant shoes and those leathery black Velcro sneakers you’ve probably seen the, uh, older members of your family wear. They have an interesting twist, though: The heels look like they’re made of springs. They may look weird, but apparently, these spiral boosters help alleviate back and muscle pain. That, and they’re covered in rhinestones.

These aren’t the first ugly shoes to cause a conversation; Balenciaga for one has had its fair share of questionable footwear (think the platform Crocs and old gym sneakers). While shoes like these would definitely have gotten you made fun of in middle school, these days they’re peak fashion, and people are willing to shell out a lotta money to look this awkward. The crystal-coated kicks aren’t available just yet, but if you’ve got your eye on them, make sure you have your wallet ready — it’ll probably be a while before this trend dies down.

What do you think of Christopher Kane’s orthopedic shoes? Tell us @BritandCo!

(Photo via Victor VIRGILE/Gamma-Rapho via Getty)

Shea Lignitz
Shea can be found in the nearest bookstore or brewery, exploring the great outdoors, or blasting Led Zeppelin. She grew up in the cold and rain of Northern California's redwoods but is currently wandering around Texas.
Fashion Week
Style News
Fashion Week Shoes
More From Style News