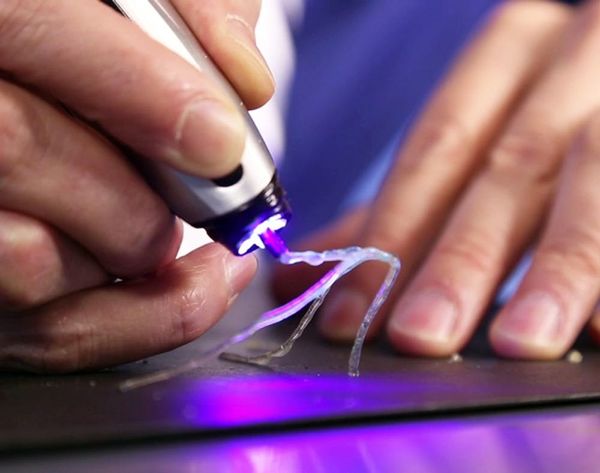 It’s no secret that 3D printing is the wave of the future — especially if you’ve been following our 3D printing lovefest for the past few years. There are now ways to create small objects, jewelry, makeup — even food! While these new advances in technology are pretty crazy awesome, brace yourselves for the newest gadget in 3D design. All you need is a pen.

Okay, so you may have seen a 3D pen before, but CreoPop is different. Aside from the fact that it’s cordless and safe, this seemingly average writing utensil is the world’s first 3D writing tool that uses cool ink… and we don’t mean cool in a super awesome sense (even though it is pretty awesome). We mean cool as in temperature — like, the opposite of hot — which means plastic melting is not involved. Instead, it uses photopolymers that are solidified with a tiny UV light. All you have to do is press a button and draw in thin air. It’s basically magic (and perfect for kids).

Our creative minds are literally exploding with the endless possibilities of CreoPop. With the $92,000+ dollars they’ve already raised on Indiegogo, the company has created three types of cool ink: Standard, glow-in-the-dark and temperature changing.

As if this 3D pen isn’t unbelievable enough, once the team meets their $300,000 goal, they plan to add a whole slew of new inks. These will include aromatic ink (make fake flowers that smell like real flowers!), body paint ink (henna tattoos!), ink that conducts electricity for science experiments, elastic ink (make hair ties!), glittering ink and even magnetic ink (make magnets for your fridge!). So you better start contributing!

Right now, you can snag your own pen when you pledge a minimum of $79 to their Indigogo campaign. The pen includes 5 ink cartridges in different colors (orange, blue, turquoise, red and black) and will arrive at your doorstep in February 2015. The more you pledge, the more ink cartridges you get to play with. If you donate $199, you get two pens, 20 cartridges, a table protector and a children’s book with templates. There are more packages up for grabs, too. Just head on over to Indiegogo to check ‘em out. You’d better act quickly, though, because once these become available in-stores, they’ll go for $120 each.

What would you use your CreoPop pen for? Sound off in the comments!

Rachel Sumner
Rachel is a Contributing Editor at Brit + Co and the founding editor of lifestyle blog, SADIERAE + CO. While her background is in fashion and styling, she also loves all things creative, cooking, traveling, binge-watching TV shows and giving piggy back rides to her golden retriever, Louie.
3D printing
Tech
3D printing indiegogo
More From Tech