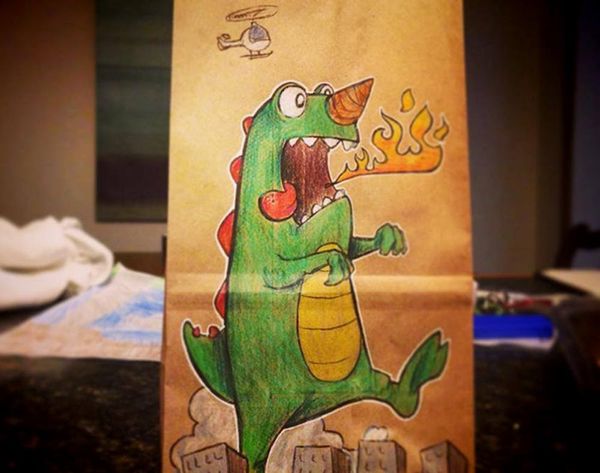 Raise your hand if lunch was your favorite school subject growing up! With a dad like Bryan Dunn, we bet your hand would have shot straight up even if he sometimes forgot to cut the crusts off your bologna and cheese on white. That’s because “brown bagging it” at the skilled hands of this designer dad is an art form that’ll blow the top off your matching Hello Kitty lunchbox and thermos.

Two years ago, Bryan wanted to do something special for his son starting kindergarten (yes, that’s the time in this story for the first “aw”). He could have just settled on the ol’ inspirational Sharpie message scribbled on a banana, but Bryan’s a “next level” kinda Dad. An illustrator and designer, he started turning those pb+j totes into little works of art. Cue more aws — quickly followed by…

Bryan shares on his personal site that the bags take him about 30 minutes to do. He draws them during his lunch break and then colors them in after the kids go to bed (we stopped counting “aws” but this is definitely one of them). His son — who must have an A+ in sharing — mostly gives them to teachers and fellow students. As Bryan puts it, dad’s drawings are nothing new to him ;)

Leading up to Father’s Day yesterday, we’ve been sharing a lot of DIYs to do for your dad, but this tops art projects DIYed by dads! Visit Bryan’s site and his imgur gallery to get inspired by more of his work. Maybe by the time back to school rolls back around, your kid will have something to trade his kid for besides pudding cups.

Lisa Raphael
In her past professional lives, Lisa has served the masses as the Editorial Director at Brit + Co, Bieber Whisperer at J-14, Golden Girls Fan Club Prez at Lifetime and Talk Show Host Understudy to Katie Couric. Now, she's taking on the sports world at The Relish, teaching Hairography 101 in her spare time and will forever be trying to fill the hole Zayn Malik left in her heart.
Lunch Recipes
Parenting
Lunch Recipes