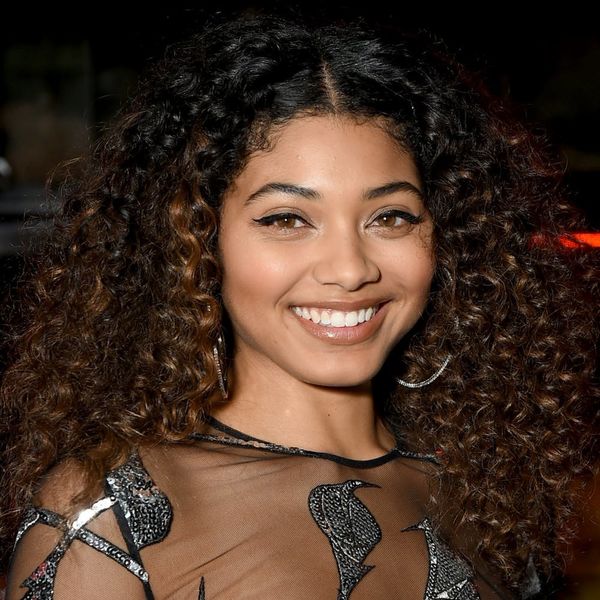 The annual Sports Illustrated Swimsuit issue just hit stands, and it’s more smokin’ — and inclusive — than ever! Following up on the magazine’s 2017 diversity issue, the magazine has chosen Danielle Herrington as its 2018 cover model, making her the third black woman to grace the face of the yearly mag in its 54-year circulation following the likes of Beyoncé and Tyra Banks.

The 24-year-old officially started her modeling career when she was 13, InStyle reports, but only recently rekindled her passion last year. Since then, she’s soared to the top, hitting the runway for the likes of Phillipp Plein.

THANK YOU @si_swimsuit for having me on your COVER. This is my first cover ever and I am beyond speechless! I dedicate this to all the young girls out there. Work hard, surround yourself with good people who believe in you and your DREAMS WILL COME TRUE! To @mj_day and your amazing team at @si_swimsuit #FamilyForever, thank you! To my my parents, family and friends, I LOVE YOU, thank you! To my agent @sandrasperka thank you for not only being the best agent, but also my mentor and friend! To @bodybymato for supporting me for the last 2 years and always being there for me! To my agency @women360mgmt you guys are the bomb! I am the luckiest and most grateful girl DREAM BIG. WORK HARD. BE RESPECTFUL. LOVE EACH OTHER. OWN IT!

The magazine also gave us a behind-the-scenes glimpse at moment the brunette bombshell learned she was the issue’s cover model from other than model Tyra Banks, who broke the news ANTM-elimination style during a faux photo shoot.

“One girl stands before me. But I only have one photo in my hands. And this photo represents the girl that is the Sports Illustrated Swimsuit 2018 cover model,” she said as the newly crowned cover model covers her face with her hands in shock.

Dreams do come true! Watch the emotional moment @danielle_herrington_ finds out she's the #siswim 2018 cover model. Big thanks to Swimsuit legend @tyrabanks for helping us share the big news!

“I was just crying so hard,” the model told Entertainment Tonight, because [Tyra] is the reason I wanted to be a SI model.” She added that the ANTM host was her “inspiration” since the mom of one was the first *ever* black cover model for SI Swim.

This year’s issue also made huge strides for inclusivity by including its first EVER totally un-retouched images in a female-produced feature called “In Her Words” starring plus-size models Kate Wasley, Hunter McGrady, and a host of other strong female figures posed nude with empowering words scrawled across their skin.

I am WORTHY, I am FEARLESS, I have CONFIDENCE, I am BOUNDLESS, I am RESILIENT, I am POWERFUL, I am ALL ME. I am no longer bound by the chains that society has put on me to fit a certain mold that has been so confining and brainwashing. Thank You @si_swimsuit @mj_day for taking on the “In Her Own Words” Project and @taylorbphoto for creating it. You continue to break the glass ceiling in a world that is so very afraid to do so.

As McGrady told Bustle, the women “each had the ability and the range to do what [they] wanted with the placement of the words on [their] bodies.”

We’re definitely loving how the brand is expanding, diversifying, and spreading some very important images of self-love that *everyone* can relate to.

What do you think of the new Sports Illustrated cover? Let us know @BritandCo!