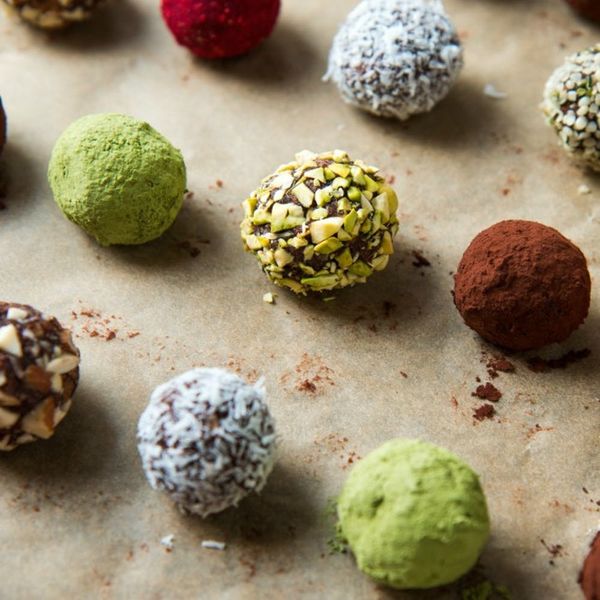 We know — when you have a taste for fruit, it’s usually for an apple, pear, or even an orange. Dates are nowhere near the top of the list, but all of that is about to change. The small, energy-boosting fruit is a good source of vitamins like vitamin A and vitamin K, and minerals like calcium, iron, and potassium. For 12 date dessert recipes, read below for some inspiration.

This chewy square recipe allows the sweetness of the dates to shine with very little extra sugar. But no worries, the flavor is still on point. (via Lively Mess)

These childhood favorites have always been considered of the healthiest cookies, even if they were store-bought. In this case, they’re made with just eight ingredients and naturally sweetened by the dates. (via Minimalist Baker)

Whether you’re balling on a court or just going for a jog, pop these cuties in your mouth for a burst of energy. Roll them in your favorite freeze-dried fruit, nuts, or even powders for some added color and nutrients. (via Will Cook for Friends)

They’re called magic bars because they’ll disappear faster than you can say *abracadabra.* (via Eclectic Recipes)

The name already lets you know that it’s going to be spicy and sweet, with an insane texture. The halved walnuts give it an extra texture that’s going to make you melt (just like the sauce). (via Dessert First Girl)

For a simple dessert to cure your sweet tooth, reach for one of these stuffed dates. They’re rolled in unrefined cane sugar, and inside is a walnut prize giving the already sweet snack quite a balance. (via Salted Plains)

A chill is in the air, but that doesn’t mean that you can’t switch up the breakfast routine. Instead of a bowl of oatmeal, grab your muffin pan for a soft muffin spiced with cinnamon and brown sugar. Eat one warm (or chilled) with a cup of herbal tea. (via Simply Recipes)

This gluten-free treat is semi-sweet, crumbly, and moist. It’s a more dense cake made with almond flour, and it keeps well. (via Omnivores Cookbook)

This easy recipe is deliciously dangerous with its inviting moistness and pieces of sweet dates and chopped pecans. (via Stephie Cookes)

We admit it; this is one of those recipes that make you go HUH?, but there’s no denying the genius of it. Think about it: creamy tahini sauce encased in a sweet date and rolled into vegan chocolate. (via Minimialist Baker)

There’s nothing more simple yet delicious than a good old butter cookie with pecans. Toss in some chopped dates and you have the perfect end to an evening for adults and children alike. (via Torey Avey)

For this recipe, dates, pecans, and coconut flakes dance in the food processor to make the soft center. (via Plaid and Paleo)
Yasmein James
Yasmein James is a food writer living in New Jersey, but her heart’s on the other end of The Lincoln Tunnel. When she isn’t writing, you can find her eating her way to the most authentic ethnic restaurants in her travels. And writing all about it on her lifestyle blog, She’s Facing Freedom.
Dessert Recipes
Dessert Recipes
Dessert Recipes recipe roundup Sweets
The Conversation