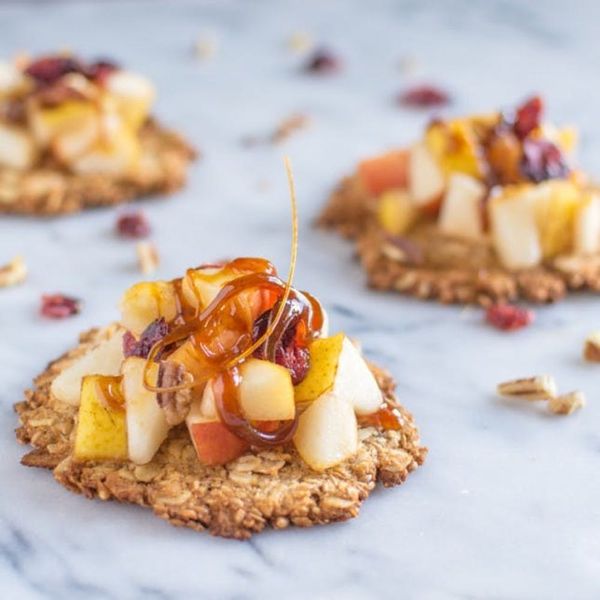 What is it about fall that instantly makes us think about apples? They are *literally* everywhere on tables, pies, on toast, and quite frankly, it’s getting old. We think it’s officially time for pears to get the attention they deserve. And before the haters talk about the grainy texture, we’re here to show them how versatile the fruit can be. For 11 pear dessert recipes, keep reading below.

Even the pickiest eater can see that this baked pear recipe is worth giving a shot. A drizzle of honey sweetens while the cranberries give them some tartness and the pecans add crunch. (via This Gal Cooks)

All of fall’s produce superstars met in one bowl and the friendship is absolute perfection. Each bite of the ginger-laden crisp is out of this world. (via Edible Perspective)

It’s almost a crime not to like cheesecake, so you know it’ll be a crowd favorite. Make it seasonal with pear puree-infused caramel sauce. We suggest a couple of slices of pear as well, because why not?! (via Country Cleaver)

For an insanely simple dessert when you don’t have time (or want) to go all out, just grab puff pastry. Top it with a heavy smear of cream cheese and canned pears. Plus, it has enough dulce de leche to transport you to South America. (via The Tiptoe Fairy)

Crunch away those sweet cravings with these cookies made out of rolled oatmeal, grated ginger, flax seeds, and flaked coconut. Chopped soft pears and a drizzle of caramel will be just what you need to stick to your healthy guns. (via Healthy Nibbles and Bits)

The cookies are grain-free, the pears are ripe, and the caramel is sweet. (via Cara’s Cravings)

This recipe is proof that you can make a decadent dessert that’s healthy and vegan too. The chopped and peeled pears are spiced with cinnamon, nutmeg, allspice, and ginger. (via Healthy Slow Cooking)

Pears. Covered. In. Chocolate. Are you drooling as much as we are? This recipe is the perfect combo between bad and OH SO very good at the same time. (via Nigella)

In case the description didn’t give it away, these bosc pears are soaked and simmered in crisp white wine. Grated ginger gives this loaf its flavor and sophistication. (via Broma Bakery)

We know what you’re thinking so we’ll just answer it: Tuaca is a citrus and vanilla spiced liqueur. Pour it up and all over roasted halved pears for a glorious gobble. (via Wonky Wonders)

For a dessert this pretty, you’ll never guess that it was made in less than an hour. We’ll let you in on a little secret: The creamy custard that’s enveloping the softened pears is made in a blender. Sprinkle confectioner sugar on top for that *WOW* effect. (via Dinner at the Zoo)
Yasmein James
Yasmein James is a food writer living in New Jersey, but her heart’s on the other end of The Lincoln Tunnel. When she isn’t writing, you can find her eating her way to the most authentic ethnic restaurants in her travels. And writing all about it on her lifestyle blog, She’s Facing Freedom.
Dessert Recipes
Dessert Recipes
Dessert Recipes recipe roundup
The Conversation