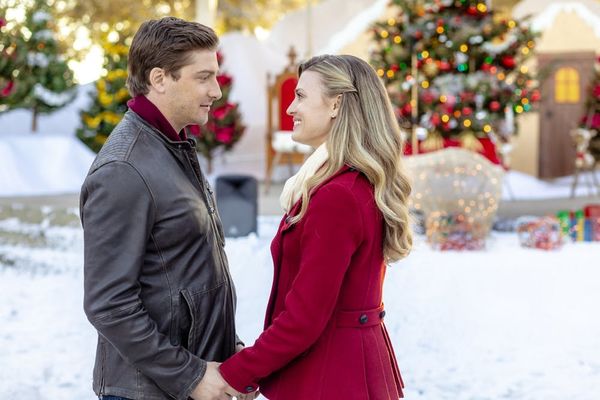 The Hallmark Channel is set to debut a record number of original new Christmas movies in 2018, and the massive rollout starts before Halloween. This year, you’ll have the option of adding an unofficial companion podcast to your viewing: Deck the Hallmark will watch and review every single film set to air between now and December 29, a brave undertaking that could only have been the idea of a self-proclaimed Christmas superfan and Hallmark-movie lover.

“I was driving down the road in April thinking about how I wish Hallmark had a year-round Christmas channel,” Brandon Gray, one of the three co-hosts, tells Brit + Co. “I was already ready for the movies to come back on. And as I thought about these movies and how I wish I had some other guy friends to talk to them about, I hatched a plan that would force two of my best friends to watch these movies. This podcast is purely selfish on my part, and I’m okay with that.”

The two best friends in question are Deck the Hallmark‘s other two co-hosts, fellow Hallmark softie Daniel Pandolph (AKA Panda) and Dan Thompson, the resident Hallmark hater of the group.

“Someone has to give the, ‘I can’t believe people actually watch these movies’ perspective,” says Thompson of his negative take on the feel-good flicks. Both Gray and Pandolph admit that they find the films corny — but both feel like that’s part of what makes them work so well.

“I know that they’re cheesy and formulaic,” Gray says. “I can join in the fun and make fun of them, but it takes a lot for me not to end up not really liking a Hallmark Christmas movie.”

Pandolph, who says he always tries to find the positive in any situation, has a slightly more philosophical take on why the low-key, uplifting films inspire such a rabid devotion from viewers.

“I think they are fundamentally positive. … Hallmark movies give us a picture of a ‘utopia’ of sorts,” he says. “I think there is a longing in every human heart for things to be okay — our relationships, our jobs, our love lives, our homes, our holidays. Hallmark offers a version of that and I think it resonates with every human heart. It makes things feel a little closer to how we think the world ‘should be.’ That’s really powerful.”

The trio actually launched the podcast over the summer, offering a handful of preview episodes that cover Hallmark’s 2017 movies. So far, Gray says, fans of the network — and even the channel itself and some of the movie’s stars — have been super supportive of the venture, even though the reviews can get critical.

“I’ve been blown away by how most of these fans really are in on the joke,” Gray says. “That these movies are silly and cheesy, and we, the fans, know that, but we love them anyway.”

Hallmark’s 2018 Countdown to Christmas kicks off on October 27 with Christmas at Pemberley, and runs until December 29. Follow Deck the Hallmark‘s ongoing reviews online, or subscribe wherever you get your podcasts.

Will you be watching and listening? Let us know @BritandCo!