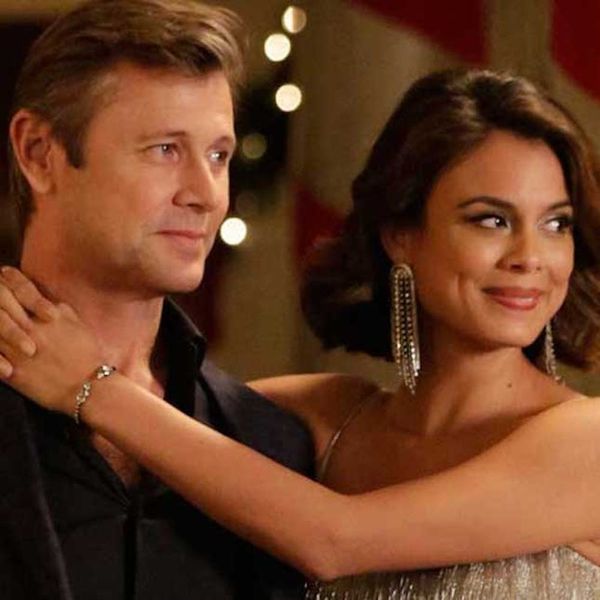 For its midseason finale, Dynasty set up a very intriguing back half of season one by introducing a new troublemaker, a new villain, and a new relationship that is sure to cause major drama.

First off, Cristal’s sister Iris arrives, and while she seems like everything’s all smiles and hugs, it turns out she was the one threatening Cristal in last week’s episode, because she has the $300,000 that Cristal and Anders (Alan Dale) dropped off to the blackmailer.

Iris has been on the run for years and thinks Cristal owes her. They finally have it out — and I do mean have it out — at the family Christmas party, which leads to a delightful fight that brings down the towering Christmas tree. It also brings to light the fact that when the two women stole all that money in Venezuela, Alejandro found them and Cristal killed him. Who is Alejandro? None other than Sam’s father.

So, to recap: Iris’s boyfriend got violent with her and Cristal over Cristal’s pregnancy, the ensuing fight caused Cristal to miscarry, and then they robbed Sam’s dad to pay for the doctor. When Iris didn’t show up at the agreed-upon meeting place, Cristal fled the country with the rest of the money, but without Iris and Sam.

Sam is furious at Cristal for lying to him, and so is Blake. Plus, Iris wants to stay in America and work for Carrington Atlantic. That should go well, especially because at the end of the episode, Blake takes a meeting with “Diego,” who is actually the decidedly not-dead Alejandro.

Meanwhile, Fallon finds out about Jeff spending Thanksgiving visiting his father in prison, so she tries to do something “nice” by taking Monica to the prison to see her father. Which is not actually nice at all, but it’s especially not nice when Fallon’s ulterior motive is to speak with the prison director about their energy contract.

After Monica rightly lays into Fallon for being a terrible friend, Fallon tries to make it up to her by starting a foundation called Colby Kids, which will provide transportation vouchers for children to visit their incarcerated parents. That’s actually a great foundation idea, but Monica is still mad and she doesn’t want to be seen as a charity case, so she tells Fallon off… and then makes a move on Michael. Michael is basically like, “Oh, okay,” so now we have that to look forward to in the new year, because you know Fallon is not going to be pleased.

Finally, Jeff goes to see his father in prison and it comes out that he’s there on false drug charges, sentenced by a judge who is on the Carrington payroll. Blake wanted to get rid of Cecil Colby because Cecil was having an affair with Alexis Carrington, Blake’s wife and mother to Steven and Fallon.

But Jeff already knew all of that, and he calmly tells his father that he’s ready to take the Carrington family down, starting with having Blake’s “little lost children” right in the palm of his hand. Oooh, I’m definitely intrigued by Jeff-as-villain, especially because Fallon has now decided she’s all in with Jeff, romantically.