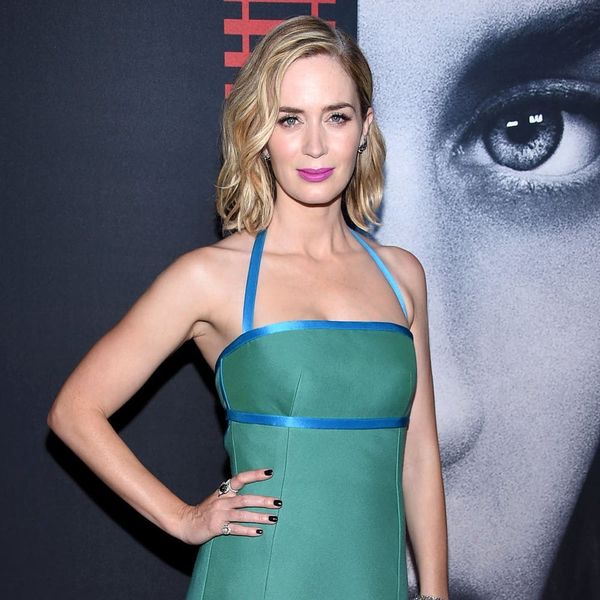 The Girl on the Train has been the most talked-about movie release of fall 2016, and it’s not hard to see why. The film, like the book it’s based on, has been touted as the next Gone Girl — the year’s can’t-resist thriller with a twist — and, above all other things, it stars the gruesomely talented Emily Blunt. But this character is no Mary Poppins remake-style Blunt offering anything that could be mistaken for spoonfuls of sugar.

An alcoholic with an apparent gift for self-sabotage, Blunt’s Rachel is a character you keep rooting for even when you aren’t sure why — a testament to the actor’s humanity and vulnerability on screen more than anything. And in the press tour leading up to the film’s early October release, Blunt got really real about what it was like to play a troubled and hard-drinking protagonist mourning infertility and a lost marriage while also being, in real life, a married mom (she and hubby John Krasinski are cute as heck, BTW) who happened to be pregnant with baby number two.

“It was a strange thing to be pregnant while playing this part,” she said. “I also had a toddler at home, who didn’t care whether I was really good in the scene. You don’t often hear about mothers being method. We’re not given the opportunity.”

Obviously we can’t say for sure that Blunt was TRYING to lay a sick burn on high-profile instances of mostly male actors going deep into their roles, Lee Strasburg style. But it was probably no coincidence that Blunt’s remark was made not long after the late-summer blockbuster release of Suicide Squad, whose star Jared Leto famously drove his castmates bananas with Joker-like “pranks” that included live rats and a dead pig on set… and then proceeded to talk basically nonstop about it while promoting the film. Real cute, Jared.

It was also probably no coincidence that a recurring theme of discussion among the The Girl on the Train cast during the course of the multi-hour press conference was, in fact, the shortage of meaty and complex roles out there for women actors. (Whether or not this film’s roles for women actors were either meaty or complex is another conversation, but this isn’t a film review, so we’ll just let that one sit.)

“I think that we haven’t seen performances, especially female performances, [that were] so raw in mainstream American cinema in a long time,” said Edgar Ramirez, who played the compromised psychotherapist Dr. Kamal Abdic in the film.

But while Ramirez’s wording suggests that it’s the fault of female actors for failing to deliver the “raw” performances he had in mind, Blunt was, well, blunt about the reason why this is the case. Namely: an industry that just doesn’t care about giving women interesting roles.

“[Female actors] have to delve through a lot of crap to get to the good stuff, and by that point everyone wants the role, needless to say,” she said. “I do feel the tides are sort of turning. We’re talking about it: the lack of equality for great roles, to pay equality, to the way women are viewed in the industry. It is now a part of the conversation.”

The problem with “conversations” is that sometimes they get mistaken for real concrete change. While Blunt agrees that tides are turning with regard to substantial roles for women in Hollywood, she notes that the shift in attitude is “hardly a tsunami.” More often than not, women are still expected to play the likable girlfriend or supportive wife or doting mother — “those boring things,” Blunt said — in order to be considered bankable onscreen.

Are you surprised by Emily Blunt’s comments? Tell us @BritandCo!