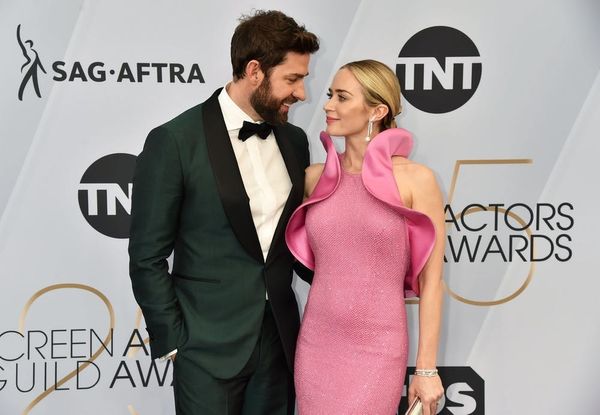 Emily Blunt and husband John Krasinski were one of the cutest couples on the SAG Awards silver carpet on Sunday, January 27, and their PDA continued well into the night. After Blunt accepted the Best Female Actor in a Supporting Role award for A Quiet Place, she revealed that although some people told her making the film with her husband would lead to a divorce, it actually brought them closer.

“You go into this process not knowing what it’s going to be like,” the actress told reporters after her win, according to People. “A lot of people were like, ‘You’re going to be divorced by the end of it,’ but we were so much closer. I think the discovery of how we collaborated and could create something together was just so special.”

The unconventional horror film, directed by and costarring Krasinski, marked the first time the couple of 10 years had ever filmed together. They’ve each spoken extensively about how much they loved the process.

“My favorite thing about shooting A Quiet Place for sure was working with John,” Blunt continued in the SAG press room. “We had never done it before and it is kind of the great unknown.”

Blunt also honored her husband during her acceptance speech. “I am going to share this completely with my husband, John Krasinski, because the entire experience of doing this with you has completely pierced my heart,” she said. “You are a stunning filmmaker. I am so lucky to be with you and to have done this film with you.”

Earlier in January, Krasinski’s directorial debut won the Critics’ Choice Award for Best Sci-Fi/Horror Movie, and he made sure to shout out Blunt in his speech, too. “I got to make a movie about a love story and a love letter to my kids,” he said. “I got to do it with the love of my life by my side, so I’m pretty sure it doesn’t get much better than that. Thank you so much.”

Are you a fan of John Krasinski and Emily Blunt? Let us know @BritandCo!