14 Things You Always Wanted to Know About Twins 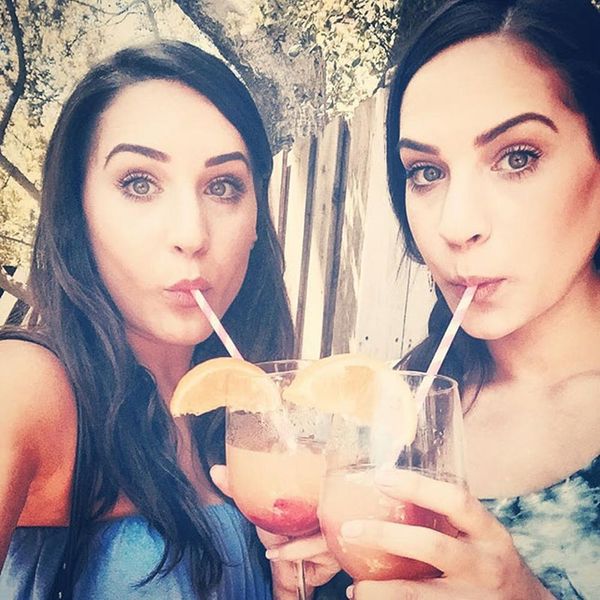 Twins! They’re just like us. Really, we are. I am a full-time twin (on call 24/7) to my genetically-identical counterpart Abby. Our story is that my cellphone-less dad was on a suuuper long bike ride when he got an overwhelming feeling that he should turn around to go home to his extremely pregnant wife (nice, dad). In true twin telepathic fashion, my mother — the real MVP of this entire situation — was at home going into labor when he arrived. Abby and I were born just one minute apart after a slightly stressful birth (I’m told) in which I allegedly bit her ear in order to be born first. Spoiler alert: It worked.

After being labeled “Baby A” and “Baby B” in our incubators at the hospital, we went home to our Post-It note-labeled cribs. From there, we quickly became Mary-Kate and Ashley’s biggest fans (our parents limited how many times PER DAY we were allowed to watch You’re Invited to Mary-Kate & Ashley’s Mall Party). It always felt cool to identify with celeb twins like the Olsens (I have always been Ashley while Abby is def MK), Tia and Tamera and the virtual LiLo twins in The Parent Trap — all experiences twin-less individuals will never have. So, to give you some insight on just what it’s like to have an identical PIC, and because every set of multiples has interesting nuggets of info to share, so I’m divulging 14 twin tidbits that give you a taste of life as a double.

1. Yes, we experience unexplainable feelings and connections: It’s really difficult to articulate what this means to “normal” people (lol) but my sister and I have always felt a remarkably special connection to each other, and I know many other sets of twins (we stick together) that also attest to this. Above is a photo of when my sister and I flew into Austin from different states and showed up in unplanned, 100% identical outfits.

2. Boring family events are more tolerable: I mean enjoyable. Your Great Step-Aunt’s 90th birthday party instantly becomes a fun time because you have someone to hang with. Case in point: a family wedding is much more fun if you and your sister *both* recently turned 21. You both are stoked and likely on the same level. You wouldn’t get that with an older or younger sibling; it just wouldn’t be the same.

3. Who’s older doesn’t really matter: Until someone wants it to (I am one minute older than my sister). If we want to get technical, whoever was born firstdoes have more life experience than the other, but let’s be real: no one cares and it doesn’t really count. It’s always, always, alwayssss the first question people ask — followed by, “By how much?” Just. Don’t.

4. You drop *everything* when your twin needs you: No. Matter. What. Like any siblings, you’ll inevitably hit some rough patches in your relationship. My sister was dealing with a super lame roommate situation when we were going through one of our rough patches (which for us means not talking for three to five days) and she called me out of the blue to vent. We both knew being there for each other was infinitely more important than whatever our stupid argument was. You can also be there for each other when you’re both experiencing seasickness at the same time as the below photo shows.

5. We always talk to other twins: Twins are drawn to other twins; Abby and I are really close with four other sets of twins. My sister and I met these 80-year-old twin sisters at Costco once who were eating pizza together, just the two of them — it was very #twinspirational. It was a routine they’d had for years. We talked to them about their relationship and it was such a memorable life moment. More recently, my sister and I were approached by 6-year-old twin girls who ended up giving us advice (it was “don’t steal each other’s boyfriends,” which is a great general life tip). There’s something about twins — we just want to talk to each other.

6. We have different tastes: In life, in love, in fashion, in a lot of things. We are not carbon copies of one another, but there are definitely undeniable parallels among our tastes. We have ordered identical meals from restaurants more times than I can count.

7. We finish each other’s sentences: It can be annoying, it can be cute and it can get weird. Happens all the time.

8. Never tell a twin, “There are two of you!”: That’s both a rude and untrue statement. No two people are exactly the same, and while twins are often similar, they are two separate individuals who deserve to be treated and referred to as such.

9. We appreciate separate birthday things: I have barely ever celebrated “my” birthday — there have been two birthdays I haven’t spent with my sister and I felt weirdly self-obsessed saying it was “my” birthday. It means so much when loved ones take the time to send two totally different birthday greetings, or gifts or whatever! It really is a nod to our individuality when someone has taken the time to think of what *I* specifically want as opposed to what “they” would want.

10. We can try on clothes for each other: I personally despite trying on clothes, so if I’m shopping with my twin, I will try to coerce her into trying on some stuff for me. I used to do this all the time during my childhood with sunglasses specifically; it was literally like looking in a mirror. Ha!

12. Yes, we were dressed alike when we were younger: It was mostly precious but sometimes confusing. Our matching outfits often differed a little bit with me always wearing a purple version while my sister wore pink (see, the same but different!) Thankfully, my parents are relatively normal, so this only lasted for a few years and they always let us be individuals, so it never got weird.

13. Switching places isn’t as easy as it sounds: I don’t know any twins who have ever successfully pulled this off. I also don’t really know when or why this would be a good idea other than for people’s enjoyment.

14. Not all twins know if they’re fraternal or identical: Most do, but my sister and I *just* found out we are identical (this is the third most frequently asked twin question). All it takes is a simple cheek swab test and you can finally KNOW WHAT YOU ARE.

Have you ever wondered what it would be like to have a twin? Share your experiences in the comments below.

Beth Wischnia
You can typically find this Texan writing, trying on a new lipstick, gabbing with her identical twin sister or volunteering at the local animal shelter. She finds inspiration from rosé, beauty products, Tex-Mex and cats.
Family
Home News
Family