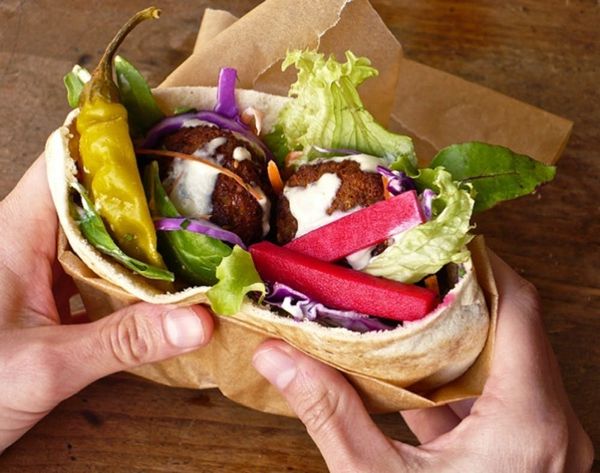 One of the best things about diverse cities like SF and NYC is that you’re constantly surrounded by the cuisines of so many different cultures every time you step out onto the sidewalk. Alas, not all of us live in The Big City, so we’re not always within walking distance of fabulous food trucks and sizzling hot dog carts. But you know what? That’s not a problem anymore! From falafel sandwiches to shrimp tacos, we have 18 of the greatest street food-inspired recipes around.

2. Golden Brown Pretzel: Soft, jumbo pretzels are the bomb! Plus, they’re as classic as street food gets. (via Cooking Classy)

3. Falafel Sandwich: We simply cannot take our eyes off of this falafel-filled delight. It’s like all the colors of the rainbow decided to have a rockin’ pita pocket party. We’re glad we got the invite ;) (via Food People Want)

4. Roasted Chestnuts in Cinnamon Butter: Chestnuts roasting on an open fire… These warm and buttery chestnuts will hold you over till you’re ready to see snow fall again! (via Taste Magazine)

5. Eggplant Parmesan Pizza: Are you ready for this epic Italian mash-up in easy-to-eat street food form? Eggplant parmesan as NY-style thin crust pizza! We just love it when food trucks jazz up their offerings with crazy toppings (Ohh, and FYI: this recipe is gluten-free!). (via Udi’s)

8. Paprika Lamb Kebab Wraps: Kebabs on a skewer are so overrated. These wraps are where it’s at. (via Taste Magazine)

9. Simple Shrimp Tacos: Of course, we had to include the fish taco! There might not be a better way to satisfy those spicy on-the-go cravings. (via Little Leopard Book)

10. Curried Beef Dumplings: Dumplings are one of our favorite Asian street foods of all time. They’re like little packages of happiness. (via Steamy Kitchen)

12. Buttery Crepes: For your next at-home brunch, take a break from fluffy pancakes and give sophisticated crepes a try. Oh, and be sure to keep with the French theme and ask your guests to bring the Champagne ;) (via Made Famous By)

13. Mini Corn Dogs: Put it on a stick, and we’ll likely eat it. These mini corn dogs would make the cutest addition to a casual summer party or BBQ. (via Food Network)

14. Lemon Watermelon Slushy: Proving that street carts and 7-Eleven aren’t the only places you can go to get a refreshing slushy. (via McCormick)

16. Mexican Street Corn: One bite into these zesty Mexican street corn (topped with cilantro and mayo — oh yeah!) and you won’t believe you’ve been eating regular ol’ corn on the cob your entire life. (via Stupid Dope)

18. Crock Pot Korean BBQ Tacos: Fusion food can be one messy #fail, but one dish that did get it so, so right was Korean BBQ tacos. Just throw soy + ginger marinated short ribs in the slow cooker and drool ’til they’re done! (via Tasty Kitchen)

Which street food recipe is calling your name? Tell us about it (and share your fave!) in the comments below!

Sonia Rao
Sonia is a determined, television-obsessed gal on a quest to find the best cinnamon waffles recipe out there. If she isn’t researching the latest fashion trends or avidly crafting, you can catch her curled up on the couch with a few (meaning a billion) cookies, watching the hilarious antics of Leslie Knope or Mindy Lahiri. Sonia loves writing for Brit + Co as much as she loves desserts, and is equally proud of her quirky, pop culture reference-filled Twitter feed.
Recipes
The Conversation
Reviews:
More From Recipes