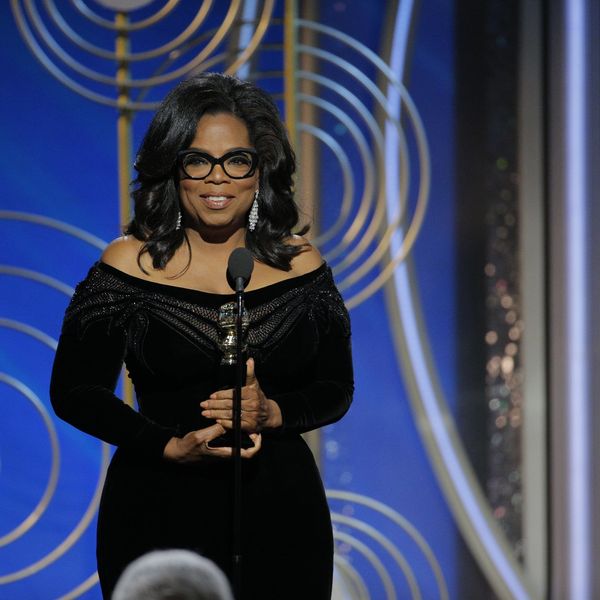 It would be easy to look back at 2018 and only see the political and social turmoil that dominated headlines for most of the year. But amid that turmoil, there were moments of joy and inspiring acts of kindness that reminded us of all the good in the world. Click through to see 14 feel-good pop culture highlights from 2018. (Photos via Richard Heathcote/Getty Images + NBCUniversal + Paul Drinkwater/NBCUniversal via Getty Images + Ben Stansall/WPA/Getty Images)

Oprah Winfrey delivered the speech to end all awards show speeches. Winfrey brought viewers to tears with her speech at the 2018 Golden Globes, where she was honored with the prestigious Cecil B. DeMille Award. After touching upon the resurgence of the #MeToo movement and telling the story of Recy Taylor, a young Black woman who spent her life fighting for justice after being raped by six white men in 1944, Winfrey declared that time was officially up for those men and others like them.

"I want all the girls watching here, now, to know that a new day is on the horizon!" she said. "And when that new day finally dawns, it will be because of a lot of magnificent women, many of whom are right here in this room tonight, and some pretty phenomenal men, fighting hard to make sure that they become the leaders who take us to the time when nobody ever has to say 'Me too' again." (Photo via Paul Drinkwater/NBCUniversal via Getty Images)

Louis Tomlinson donated $10,000 to help a sick fan. Nine-year-old One Direction fan Rylee Sanford has a rare brain malformation that causes cerebral palsy. So in January 2018, her family reached out to the public for financial assistance to make their home more accessible for Rylee. That's when Tomlinson stepped in to donate $10,000. He also left a sweet note for Rylee on her YouCaring fundraising page. "Sending you all the love!" he wrote, signing his name with an "x." (Photo via Christopher Polk/Getty Images for iHeartMedia)

Kesha brought everyone to tears at the Grammy. In January, just after the launch of the #TimesUp movement, Kesha delivered one of the most poignant performances of the year at the 2018 Grammys. Taking the stage with more than a dozen other artists, including Camila Cabello, Julia Michaels, Cyndi Lauper, and Andra Day, the "True Colors" performer sang "Praying," which she wrote amid her ongoing legal battle with Dr. Luke. (Photo via Kevin Winter/Getty Images for NARAS)

A teen raised money to send 1,000 girls to see A Wrinkle in Time. When Ava DuVernay's adaptation of the classic novel A Wrinkle in Time hit theaters in February 2018, 14-year-old Taylor Richardson wanted as many girls as possible to experience the wonder of the groundbreaking movie, which featured newcomer Storm Reid in a starring role alongside Oprah Winfrey, Mindy Kaling, and Reese Witherspoon. To that end, she started a GoFundMe page to raise money to book a private screening of the film for 1,000 young women. "I wanted all girls, especially girls of color, to know they can be whatever they want to be when they grow up and also can struggle and have flaws and still be successful in life," she told Good Morning America. (Photo via Dimitrios Kambouris/Getty Images for Hearst)

Drake gave away nearly $1 million in his "God's Plan" music video. In February 2018, Drake debuted the new music video for his song "God's Plan." This wasn't just any music video, though. Director X and Karena Evans filmed Drake giving away nearly $1 million on the streets of Miami — paying for customers' groceries, handing a stack of cash to a family in need, making donations to a women's shelter and a fire station, and even covering a woman's tuition to the University of Miami.

"The budget for this video was $996,631.90," a title card at the beginning of the song explained. "We gave it all away. Don't tell the label." (Photo via Joe Scarnici/Getty Images)

Mirai Nagasu made history. There are always jaw-dropping feats at the Olympics, but this year's Games were particularly notable for 24-year-old US figure skater Nagasu, who became the first American woman (and third woman ever) to land a triple axel in Olympic competition. Even competitors from other countries cheered her achievement. (Photo via Richard Heathcote/Getty Images)

Prince Harry married Meghan Markle. Six months after they announced their engagement, Prince Harry and Meghan Markle — or Meghan, Duchess of Sussex, as she is now known — exchanged vows at St. George's Chapel at Windsor Castle. The royal wedding was a star-studded, glamorous affair, but more than that, it was the start of a new chapter for the royal family. (Photo via Ben Stansall/WPA/Getty Images)

Fans rallied to save Brooklyn Nine-Nine. In May 2018, Fox shocked fans by canceling Brooklyn Nine-Nine after five seasons. Viewers (including celebs such as Lin-Manuel Miranda and Seth Meyers) immediately flooded social media with #RenewB99 tweets in an attempt to save the show — and it worked. Less than 24 hours later, NBC swept in to pick up the police-themed comedy for season 6. Nine-Nine! (Photo via Trae Patton/NBC)

Taylor Swift paid it forward. In July 2018, Swift donated "a significant number" of tickets to her Reputation concert in Foxborough, Massachusetts, to the townspeople of nearby Weymouth, who were grieving the tragic death of Sgt. Michael Chesna. "My understanding is that they did it low-key and weren't looking for publicity," Mayor Robert Hedlund told The Patriot Ledger. "There were enough [tickets] to send every police officer, firefighter, and extended family to the concert, and then some." He added that "the gesture was absolutely generous, significant, and appreciated."

Then, in October, the "Delicate" singer came to the aid of a fan who was seeking help for medical costs related to her mother's care. "My mom has been in a coma for three years now," Sadie Bartell, who is an active member in Swift's online fan community, wrote on Twitter. The 19-year-old was reluctant to ask for help but said she had reached her "breaking point." Weeks later, on October 20, Bartell tweeted an update, revealing that Swift had quietly donated $15,500 to the family's GoFundMe page. (Photo via Emma McIntyre/Getty Images for dcp)

Gina Rodriguez used her Emmys money to send someone to college. The Jane the Virgin star put her Emmys campaign fund to good use in 2018, but not in service of herself. Instead of spending the money from CBS Television Studios on a pricey "For Your Consideration" bid, Rodriguez teamed up with Big Brothers Big Sisters of Los Angeles to give a deserving student four years' worth of tuition to Princeton University.

"It's taboo to talk about the money being spent, but it's the reality. I think sharing this might inspire other people to do something similar," the actress told the Hollywood Reporter. "You can desire recognition and, at the same time, decide to not play in the confines of the game as it's set up." (Photo via Christopher Polk/Getty Images)

Betty White stole the show at the Emmys. The Golden Girls star cemented her status as a national treasure when she was honored for her decades-long career at the Emmy Awards in September. "It's incredible that you can stay in a career this long and still have people put up with you. I wish they did that at home," White joked in her speech, which was equal parts hilarious and heartwarming. "All I can say is, it's such a blessed business to be in. How lucky can I be, and how much can I say thank you to each and every one of you? Thank you so much." (Photo via Kevin Winter/Getty Images)

Emmy winner Glenn Weiss proposed to his girlfriend onstage. Weiss delivered an unexpectedly romantic speech when he won Outstanding Directing for a Variety Special at the 2018 Emmys in September. After paying tribute to his late mother, he turned the attention to his longtime love, Jan Svendsen. "You wonder why I don't like to call you my girlfriend? Because I want to call you my wife," he announced.

Then, as the crowd watched in awe, Weiss got down on one knee and proposed to Svendsen. "This is the ring that my dad put on my mom's finger 67 years ago," he began. "Jan, I want to put this ring that my mom wore on your finger in front of all these people, and in front of my mom and your parents watching from above. Will you marry me?" She said yes, obviously. (Photo via Kevin Winter/Getty Images)

Desiree O
Desirée O is a ‘Professional Bohemian’ who loves anything and everything related to the arts, entertainment, and pop culture. She ADORES being a ‘Newsy’ for Brit + Co, covering all of the latest tidbits of awesomeness that you want to read about. When she’s not writing, she’s either making messy art, going on long adventurous walks with her camera, or poking around over at bohemianizm (http://www.bohemianizm.com/). You can find out about Desirée O and her work at http://DesireeO.com/ or follow her on Twitter @DesireeO.
Best of 2018
Pop Culture
Best of 2018
More From Pop Culture