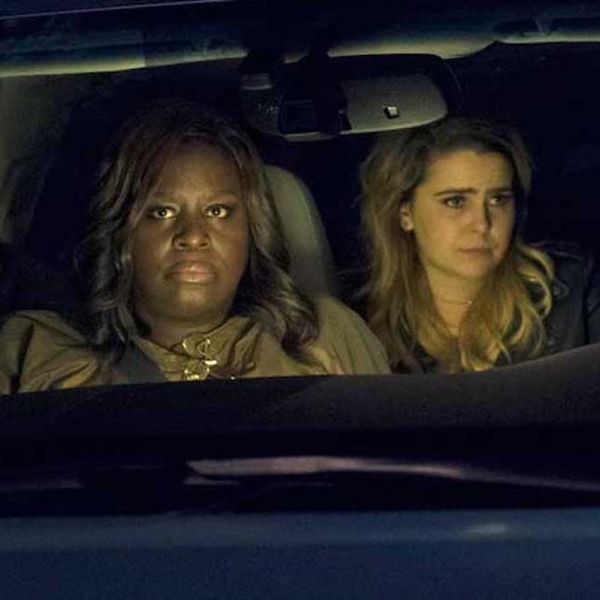 Going into this series, the thing I was most nervous about for Good Girls over the long haul is how and why these women keep finding themselves in criminal situations. Episode two goes a long way in allaying some of those fears, as the writers create a couple of fairly organic reasons for their life of crime to continue.

First off, the drug dealers want back all the money that the ladies stole from the Fine ‘n Frugal. Ruby (Retta) spent some of hers already on her daughter’s kidney medication, and Beth (Christina Hendricks) made a mortgage payment so she wouldn’t lose her house. Annie (Mae Whitman) also made some pretty large purchases (a Porsche, a laptop) but was presumably able to sell those things for a decent amount. But they’re still short and time is running out to get Rio (Manny Montana) the rest of his money.

Luckily, this dovetails nicely with another problem they have — Boomer (David Hornsby). This rapist weasel isn’t dead (which is probably for the best, practicality-wise), but he is tied up in Beth’s kids’ treehouse because the women don’t know what to do about the fact that he knows they robbed the grocery store. They decide they should ransom him to a loved one, which would get them the rest of the money they need.

So they still have a Boomer problem. But Annie comes up with a way to keep him in line — she takes a picture of his penis and claims she sent it to her daughter (she didn’t), and then tells him that if he goes to the cops, she goes to the cops. It’s smart because she’ll always have the pic as an insurance policy.

But that still doesn’t solve the money problem. When Rio comes to collect, the women don’t have the rest of his cash. Fortunately (or unfortunately), Beth shows Rio just how tough and smart she really is, and he decides they can work off their debt — by running drugs for him.

Now, that’s not exactly what he comes out and says. He actually just asks Beth if they have passports. But I’m assuming they’re about to make some kind of drug run for him, which should prove interesting and probably very funny. I also like that Rio is now firmly in the picture, instead of being a one-off threat, especially because Montana and Hendricks have insane chemistry together.

Creator and executive producer Jenna Bans told me in a preshow interview that I’m not imagining the chemistry between those two actors. The writers noticed it too and couldn’t help but lean into it a little.

“They have crazy chemistry. Did not see that coming at all,” said Bans. “Of course, you start to naturally write to that or at least have that in your brain. We’re cognizant of keeping it super real — it’s not the show where she immediately falls into bed with this Detroit criminal — but yeah, there’s a chemistry and it’s palpable and you can’t just ignore that, so yes, we nod to it and write to it in subtle ways the first season. It’s a perfect example of letting the actors drive the story.”