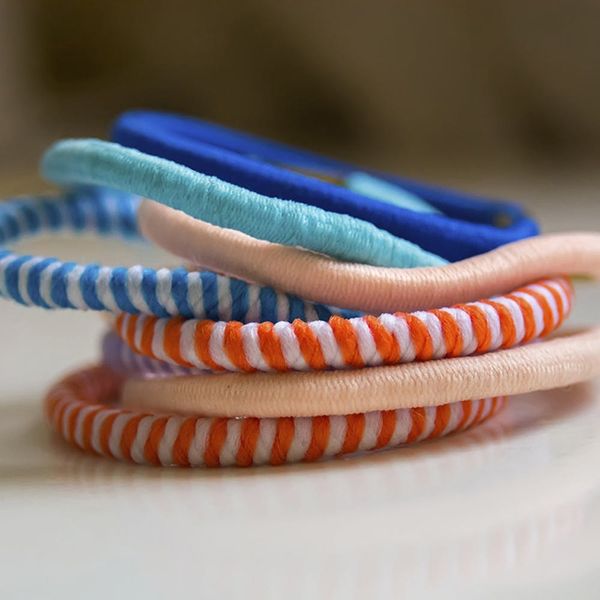 It’s probably with wide eyes and an open jaw that you read about what happened to the woman in Philadelphia who got a deadly infection by wearing a hair tie on her wrist. No idea what we’re talking about? Let us catch you up to speed. A woman named Audree Kopp found a bump on her wrist one day that she originally thought was a spider bite. But the mysterious bump continued to grow and after a visit to the ER, medics told Audree she needed surgery and was at risk for sepsis (a potentially life-threatening bacterial blood infection). Kopp’s doctor told CBS News that bacteria from her hair tie likely got under her skin through her pores or hair follicles. Yikes. Here’s a video if you want to see for yourself.

We’re not going to lie, one look at Kopp’s abscess is enough to make us keep our hair ties in our pocket from now on. But do we really need to or are we just being paranoid by a freak accident gone viral? We decided to chat with a pro to see what she thought about the whole ordeal.

Dr. Nora Lansen of One Medical Group tells us this is not a case she’s ever seen or read about before. Lansen says that unless the hair tie is too tight (as in, it makes an impression on your wrist) it should be okay. Lansen explains, “Although I’ve not personally treated a patient with this condition, I can imagine the circumstance under which it might have developed. First of all, there must have been a break in the skin at her wrist. Either a pre-existing cut over which she wore the hair tie or an abrasion that developed as a result of wearing a hair tie that was too tight, which created friction against the skin. Bacteria from the hair tie or from anywhere in the environment could then enter the cut and infect the skin.”

If you want to know what to look for, Larsen says, “Early mild symptoms are redness and itching. This type of infection (cellulitis) can be easily treated with oral antibiotics. In this patient’s case, her infection developed into an abscess, which required a procedure to remove it (as all abscesses do). The bottom line is, don’t wear a hair tie that is too tight, and if you notice symptoms of irritation, remove the hair tie. If the symptoms persist, see your doctor.”

There you have it, folks. For those of you who are still worried but really love to wear your hair tie on your wrist, we suggest you grab yourself this stylish bracelet that not only keeps the rubber band off your skin but adds a little bit of style to your everyday ensemble.

What’s your initial reaction from reading about Audree’s infection? Does it make you think twice? Share with us in the comments below.

Cortney Clift
Cortney is the senior writer and special projects editor at Brit + Co. She typically covers topics related to women's issues, politics, and lifestyle. When she's not buried behind her computer you'll find her exploring New York City or planning her next big adventure.
Hair