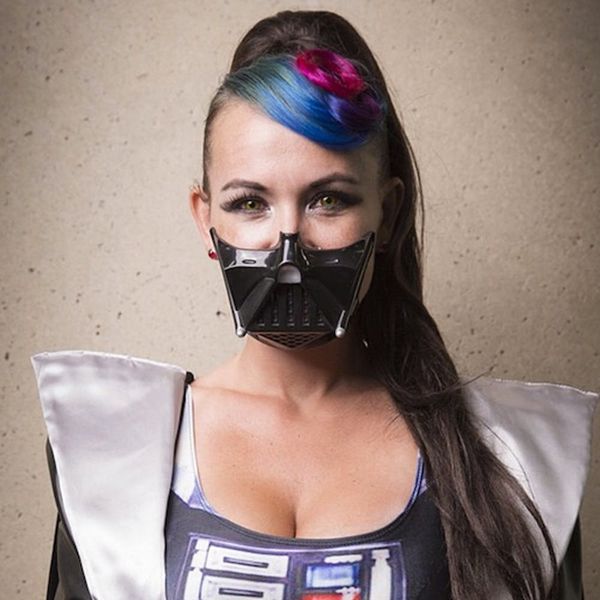 Comic-Con 2015 was all about girl power. Thanks to the increasing number of female heroines in comic books and movies, strong female characters made up half of the wacky and wonderful costumes at #SDCC. From female Thor to fiercely feminine Mad Max characters, these girls definitely don’t need saving. So whether you want to dress up as a princess or a warrior, these ladies have got the whole badass costume thing nailed, and we’re taking lots of DIY notes for when Halloween 2015 rolls around.

1. Three Chewie’s Angels: Star Wars takes a pastel turn with this awesome trio calling themselves Chewie’s Angels. With enough faux fur and a little spray paint, this costume wouldn’t be too hard to DIY. (via IB Times)

2. Hellgirl: Who knew a red face and some little horns could look so hardcore? Instead of going with the traditional sexy devil, go a little more gritty with a Hellgirl costume. (via PopSugar)

3. Sylvanas Windrunner: Get your WoW (World of Warcraft) on with a little undead warrior action next Halloween. While the purple warrior princess armor might take some expert DIY skills, the maroon cape and horns will be a cinch. (via @mtv)

4. Sharknado: A new Sharknado show was just announced, meaning that the shark fans were out in packs, err shoals. Or is it schools? Either way, if you can hunt down a shark mask and a shiny silver bodycon dress, your Halloween costume this year will be killer. (via San Diego Union Tribune)

5. Up: We love a good couples costume, and this one is especially adorable. Although, we’re still trying to figure out how she got into that dollhouse… anyone have any DIY ideas? (via @yahoomovies)

6. Hello Kitty R2D2: Can’t decide which character you want to be? Why not combine the two into one awesome fusion costume? (via Pop Sugar)

7. Woodland Fairy: We’re not sure if this character is the trickster Pan or a mystical fairy, but we love the earthy vibes she’s giving off. Chalk your hair to get those bright green hues, DIY a flower crown and have fun with face paint and jewels for a delicate, pretty look. How about those purple eyebrows? (via Matt Cowan/ Getty Images)

8. Darth Vader: Instead of going the fusion costume route, go all out for your favorite droid-inspired getup. The mouthpiece and blue and red hair take this costume to a whole other level. (via @mtv)

9. Toothiana from Rise of the Guardians: The sari is bright and colorful, but add some fairy wings and a cool feather headpiece, and you’ve got a costume that’s out of this world. (via PopSugar)

10. Sexy Ewok: Depending on how much skin you want to show, these fluffy ewok costumes could be an easy DIY. How cute are those pom pom ears? We’re obsessed. (via LAist)

11. Sadness: We have no doubt that we are going to see a lot of costumes inspired by Inside Out this year. And luckily Halloween is during a pretty cold time of year, so you can just bundle up in a sweater and still have a “hot” costume. (via PopSugar)

12. Michonee from Walking Dead: If you’re more of a zombie killer than a zombie, grab a sword, some chain and get ready to hunt down some walkers. (via Hit Fix)

13. Mad Max Tribe: Talk about fierce! These Mad Max girls are as tough as it gets. Get the look with dark, smudgy eyes, a neutral lip and some seriously messy hair. Leather corset is optional. (via San Diego Union Tribune)

14. Circus Zombies: You can’t go wrong with a good zombie costume. These zombies at SDCC were on point with just enough blood to be scary and just enough fashion sense to be super stylish. (via @senuval)

15. Mera: Say no thank you to the mermaid tail and grab a trident instead for a powerful Aquagirl outfit. We might still go for some cool blue mermaid makeup though. Ya know, just to show off that pastel eyeshadow. (via IO9)

16. Rey from Star Wars: Start collecting fabric pieces now and by Halloween you’ll have enough to wrap up a sexy sandman costume. (via @thestylishgeek)

17. Captain America and Agent Carter: Grab a Captain America, or don’t — Miss Carter was pretty independent — and top off that bright blue suit with a red hat and an air of mystery. (via PopSugar)

18. Edward Scissorhands: We never thought of Scissorhands as sexy, but with those strong cheekbones and vampy lip, this macabre costume totally satisfies our Halloween requirements. (via San Diego Union Tribune)

19. Victorian Loki: Anyone else think Loki was the best part of Thor? We love this female take on the character with a ruffled skirt, fierce makeup and that terrific headpiece. (via Pop Sugar)

20. Imperator Furiosa from Mad Max: Channel your post-apocalyptic Charlize Theron with this easy-as-a-tube-of-black-face-paint costume. If you aren’t feeling like giving yourself a buzz cut, some slicked back hair will do the trick. (via @mtv)

What’s your favorite costumes from Comic-Con? Getting any ideas for Halloween? Tell us what you’re loving in the comments below!

Kate Thorn
Kate Thorn is an illustrator, foodie, photographer, and blogger at Create & Kate. She loves creating art, traveling, and all things chocolate. A native to the Great Northwest, she is currently living in London and pretending to be a mature grad student.
Halloween
Halloween Costumes
Halloween Halloween Costumes