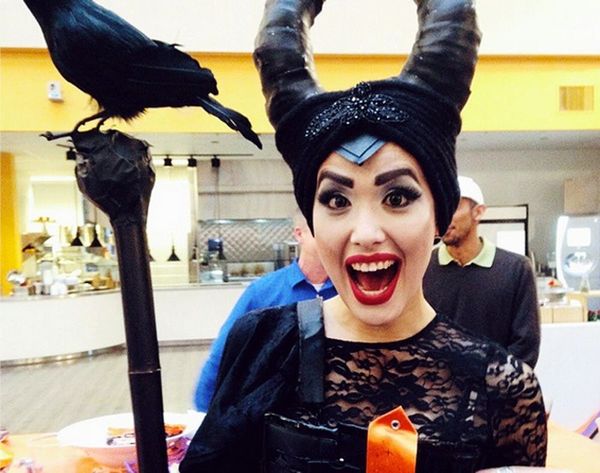 We’ve decided that Instagram is like social media trick-or-treating. Wear a rad costume. Post a pic. Get hearts. You can’t eat the hearts… but you get the idea. We wanted to treat our favorite Insta-costume finds to a little Halloween fame. For your scrolling pleasure, here are some of the best costumes on Instagram that we’ve clicked (and heart-ed) across this year!

1. 1989 Album Cover: You and all your friends can top the charts with this super simple T.Swift costume. When the DJ plays “Shake It,” you’ll be a total hit. (via @atomicv8)

2. Shia LaBeouf: This mashup costumes captures two of Shia’s most memorable looks from this year. Can’t beat a two-for-one. You think we inspired this one? (via @eddieutah)

4. A Banksy: One of Banksy’s most popular works of art comes to life for Halloween! Hopefully he just stands like that all night. (via @natelava)

5. Rhino Dog: This monochrome pup blends right in with his costume. Maybe he was a rhino in a past life? (via @knieder_1)

6. Tub Dog: Most dogs hate baths and most pups aren’t too fond of costumes, so we’re not sure how this owner even made this happen, but we’re loving it. (via @ittystagram)

7. Martini Dog: If your pup is stuck in a cone for Halloween, make the best of it by throwing some olives in there. (via @fozzcook)

8. Darth Vader: Luke, I am your dogger. Sorry, that’s the best joke we could come up with. But seriously, this Frenchie is funny enough on his own, right? (via @urbanoutfitters)

9. Doge: All you need for this one is a printer and some scissors and you’ve got your last-minute costume in the bag. (via @_chriswilliams8)

10. J.Lo and Jimmy Fallon in “Tight Pants”: Duh, we love this one. It’s an easy last minute look especially if you and your partner already have short, brown hair. (via @lizbethlauren)

11. “I Like Turtles”: Do you remember this kid from Halloween’s past? If not, let us remind you and then we can all join in on a group LOL. Here’s the video. (via @mikellekennedy)

12. Horned Mummy: We would hate to run into this creature in a dark alley… or anywhere really. (via @nastynapalm)

13. Skull: These painting skills are seriously impressive. She doesn’t even need a costume, just that face paint and a solemn stare. Spooky! (via @dashaastoyanova)

14. Jigsaw: Saw is a Halloween classic, and with the tricycle and everything, we’re taking this rendition scary serious. (via @lanolinthehotard)

15. Mommy Mummy: All you need to know about this one is the caption. “Last year I was a mummy. This year I’m a mommy mummy. And I’m single and I’m working two jobs and I’m just trying to get back out here.” #WINNING.

16. Gingerbread Man: Besides that bread going stale, this costume is a total win. Can’t beat a simple pun look. (via @rikki_b)

18. This Job Kills Me: We hope your job doesn’t kill you, but this is a good excuse to look like a minimal zombie at the office. (via @mdrampton)

19. Chickens: Every one has a crying-baby-in-costume pic, and we can’t get enough of this one. (via @maxwanger)

20. Ramen Noodles: Do you think they wrapped this little one in a mop to get this look? Whatever they did, it has us cracking up and craving ramen. (via @jimmyfallon)

21. Mini Pharrell: Seriously, talk about Happy. We couldn’t be more happy with this lil version of Pharrell beneath a really big hat. (via @monicarosestyle)

22. Pop Art: We’ve said it before and we’ll say it again, we love this comic book, pop art costume. It’s classy and simple! (via @em.stylist)

23. Two Face: This is some legit painting. She goes from beautiful to terrifying with just a turn of her head! (via @northwestlegit)

24. Dolled Up: Whoa. Talk about cute/creepy. Maybe we just never realized how creepy doll eyes could be until they were painted on top of a human’s. (via @megchan23)

25. Mary Poppins: Is she in flight?! Her costuming skills paired with her jumping skills make for a positively magical Halloween look. (via @courtneymakesvideo)

27. Helga: Alright, so Hey Arnold! was more small screen, but we have a soft spot for Helga. Isn’t that unibrow fierce? (via @surdyksliquor)

28. Maleficent: That “Best Costume” ribbon is well deserved. From the hair and makeup to the crown and the crow, we’d be totally scared of her if it weren’t for the big grin. (via @saraheward)

We’d love to hear about the great costumes you’ve seen this year! Let us know about them in the comments!

Katelan Cunningham
Katelan is a tech junkie obsessing over all things startup and design. She has entirely way too many apps on her phone and is no stranger to binge-watching. She accidentally fell in love in Los Angeles and that’s where she currently lives, writes, tweets and grams.
Halloween
Party
Halloween Instagram Roundup
More From Party