This Teen Scientist Will Make You Want to Retake Science Class 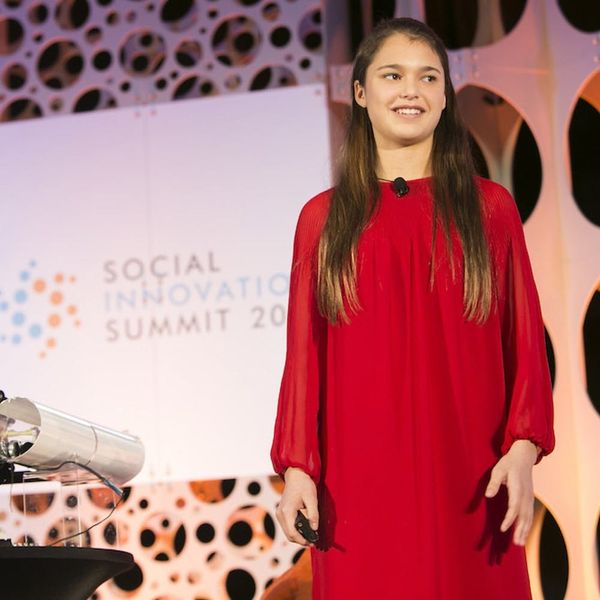 As I wandered around the Social Innovation Summit in Silicon Valley a few week ago, I heard from people like the founder of Bitty Foods (a company making baked goods out of cricket flour), Sal Khan of the Khan Academy and even the ladies behind ImprovHQ on how you can use improv techniques in the professional world. Among this sea of professional do-gooders was one innovator who was a little bit younger – 15 years young, to be exact. Her name is Hannah Herbst, and she’s probably about to make you regret those high school years you spent ditching class to hang out at the mall.

Hannah is from Boca Raton, Florida. She (and her dad Joel) came out to California to speak at the summit about her award-winning creation, BEACON. In short, BEACON is a turbine that has the capability to use the energy from ocean currents to provide a stable power source and fresh water to developing countries around the globe. Told you you’d regret those sneaky naps you took in science class.

“I was inspired when I received this newsletter in the mail describing the living conditions of my now 10-year-old pen pal Ruth in Ethiopia. I learned how she was living in energy poverty and how she doesn’t have access to electricity.” Hannah told me. “I did some more research and saw that over 70% of those in her area and over one-fifth of the people in the world are also living without electricity, so I wanted to create a feasible, sustainable solution to collect energy from moving bodies of water.”

She took her idea to her mechatronics teacher (because everyone has a mechatronics teacher, right?) who gave her access to the materials she needed. She then applied to the Discovery Education 3M Young Scientist Challenge who supplied her with additional materials and a mentor. She went on to win that challenge along with $25,000 and the title of “America’s Top Young Scientist.”

Hannah wasn’t always so eager to be an engineer though. “My dad forced me to go to this summer engineering camp and I was the only girl there. I didn’t want to be there at all,” Hannah explained. “But after a few days I was working with all the robotics sort of stuff there and I was really interested in it after just a few days of doing it and wanted to continue it. I joined robotics at my school and I’ve been working with them ever since.”

As a young woman at the forefront of a career in a primarily male-dominated industry (Hannah was offered jobs at Google, Apple and DEKA while at the summit BTW), I was curious to get her thoughts on why more girls aren’t super interested in engineering. She told me, “I think that sometimes girls are more of a minority, especially in other countries where some girls can’t get an education, or can’t do this, can’t do that… but we really can. We have the same brains as guys, we can do whatever we want.” She goes on to explain that a little bit of encouragement at a young age can do wonders (she’s sort of a testament to that). “Introduce them to great companies like GoldieBlox. It’s important to tell girls from a young age, ‘You can build this just like your brother can.’ Empowering them while they’re young can make a huge impact.”

When picturing what the future of the engineering world looks like, Hannah told me, “I hope that everybody can have access to being something that they want to be – especially girls. I hope that we’re at least at an equal percentage in engineering and that we can all do whatever we want. Because without FAU [Flordia Academic University, where Hannah is about to be a COLLEGE FRESHMAN] and without being at that camp I wouldn’t have had access to engineering activities.”

But before Hannah rules the world, she wants to keep working on and perfecting BEACON. For someone who has achieved so much success at such a young age, Hannah seems surprisingly open to the unavoidable failures that come with monumental projects like BEACON. When listing her role models, Hannah dropped Thomas Edison’s name. When I asked her why Mr. Edison, she told me, “Because he failed 10,000 times but always would say, ‘I didn’t fail, I just found different ways that didn’t work.’”