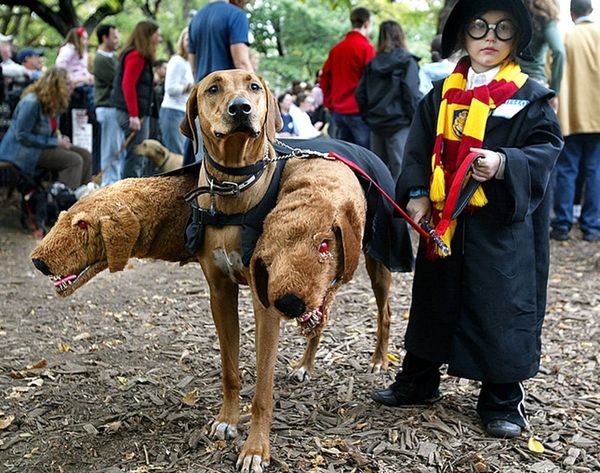 ICYMI: J.K. Rowling will be giving us the best treat of all on Halloween day. A new Harry Potter story! We can’t even wait. The 1700-word story will focus on the no-doubt, spooky backstory of the infamously pink Defense Against the Dark Arts Professor, Dolores Umbridge. You can read it for free on Pottermore come Friday. Until then, we’re celebrating with the best Harry Potter Halloween costumes, starting with a recreation of Professor Umbridge herself.

1. Professor Dolores Umbridge: The evil professor is a vision in pink, pink and more pink, topped off with a tweed cloak. Walk around with an upturned chin, and if you’ve done it right, people will shudder in fear. (via Gallery Hip)

2. Hagrid: When it comes to dressing up like Hagrid, size matters. We want to give this enthusiastic dad a standing ovation for his gigantic efforts to make the soft-hearted, half-giant wizard true to scale. (via Geocaching)

3. Bellatrix Lestrange: For a Slytherin alumni and terrifying Death Eater, Bellatrix really has a killer fashion sense. Channel her look with big hair and a long black dress. (via Fashionably Geek)

4. Voldemort: The face of evil himself is tricky to master, but the rest of his costume is simple. Special effects prosthetics will set a true Harry Potter fan costume apart from the rest. (via Meme Center)

5. Severus Snape: A half-blood wizard like Harry, Serverus Snape has a complicated past and a simple costume. What we never realized was how stylish of a bob he has. (via Cosplay Island)

6. Ron Weasley: Other than having red hair, most of Ron’s costumes are just his school garb. We love this one though, because, with some smudges of dirt and a busted wand, it perfectly captures Ron’s wizarding hijinks. (via Cosplay Island)

7. Draco Malfoy: This Death Eater’s son caused all kinds of trouble for Harry along with his friends from the Slytherin house. You can’t nail this look without bleach blonde locks… or a bleach blonde wig. (via Deviant Art)

8. Hermione Granger: She’s the muggle we all know and love on screen and off. Nail Emma Watson’s on-screen witching look with a book in hand and strawberry blonde locks. (via Deviant Art)

9. Fluffy: If you’re bringing your pup along for trick-or-treating, give him a couple extra heads to guard your candy. Just don’t play music, or he’ll fall asleep on the job. (via Romp Rescue)

10. Dobby: All of a sudden, this heroic house elf looks a lot less creepy. With this infant costume, maybe the whole family can go HP this Halloween. (via i09)

11. Harry Potter: The main man has a pretty basic look. With dark hair, Gryffindor garb, glasses and a lightning-shaped scar you’ve nailed it. So why not shake it up and go for a funny HP like Jim Carrey did in Yes Man? (via Blog Hogwarts)

Which Harry Potter look is your fave? Let us know in the comments!

Katelan Cunningham
Katelan is a tech junkie obsessing over all things startup and design. She has entirely way too many apps on her phone and is no stranger to binge-watching. She accidentally fell in love in Los Angeles and that’s where she currently lives, writes, tweets and grams.
Harry Potter
Party
Harry Potter
More From Party