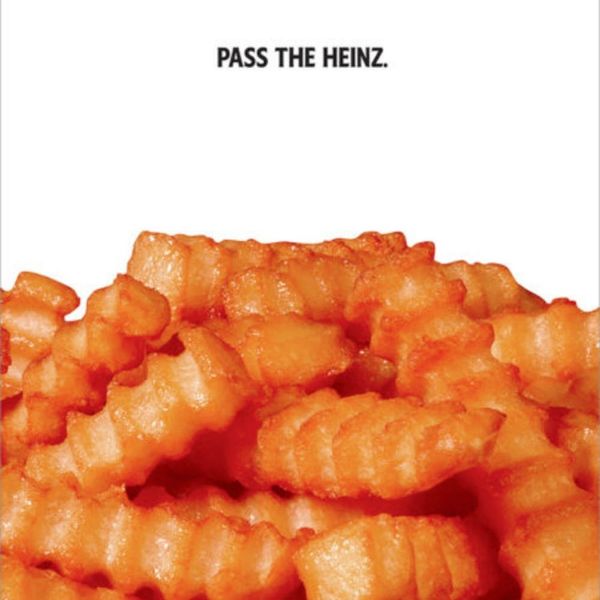 Mad Men didn’t only define the era that it was set in; it defined an era of television. With so much beauty and fashion to gain inspiration from (never mind the decor!), one of our favorite parts of the show was the ads the characters pitched to major brands we still know and love today. Some of the most memorable moments of the show happened when Don Draper and Co pitched their ideas, and now, one major brand has taken a Mad Men pitch, and made it a reality, 50 years after it would have been created (if the show was real).

The pitch on the show was so simple in its idea. The campaign, according to fictional Draper, was simple: Don’t show the ketchup; show the food you want to eat with ketchup on top. In the show, the Heinz execs didn’t want to run ads that didn’t show their iconic bottles, but now, IRL 50 years after the show would have taken place, Heinz’ ad agency DAVID Agency has created ads that look just like the ones Don Draper pitched. And the campaign is genius.

“Even though Don Draper created the ‘Pass the Heinz’ campaign almost 50 years ago, the communications still really work in today’s world,” said Nicole Kulwicki, head of the Heinz brand. “Mr. Draper really understood the one thing every Heinz fan knows, which is to never settle for the foods you love without the great taste of Heinz. What we loved about the campaign is that it doesn’t require paragraphs of copy to explain it. It features mouthwatering food images, and all that’s missing is the Heinz.”

On top of running the ads inspired by the show, the DAVID agency credits Sterling/Cooper/Draper/Price as the lead creatives on the campaign, and also gives credit to the episode’s writers, Matthew Weiner and Erin Levy, as lead copywriters on the ad.

What was your favorite Mad Men pitch? Tell us @BritandCo!