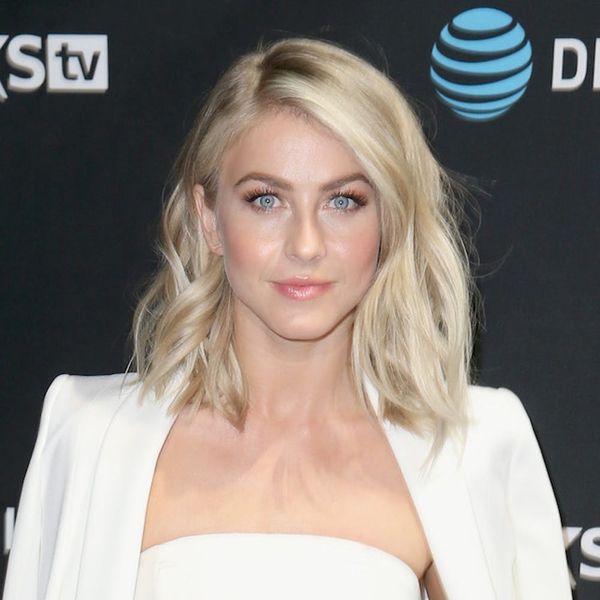 Ever since Julianne Hough got engaged to fiancé Brooks Laich during a family vacay almost a year ago, we’ve been on wedding watch. But apart from that little wedding dress preview last fall, we haven’t seen much. Out of the gate Jules made it clear that she didn’t need a rushed ceremony to make her and Brooks’ lifelong commitment to each other any more legit. As recently as January she admitted to Good Morning America that she hadn’t done any planning, calling herself the “worst bride ever.” (Psh, remember Jules, a marriage ain’t a wedding.) But it looks like we may have some signs of prep…

A lot can happen in six months and while official plans are still either stalled or being kept hush-hush, we’ve been spotting a few clues that can’t help but make us think this thing might be getting under way. Here’s everything we (think!) we know so far.

1. Could her recent hair extensions be for wedding look trials? After showing off a stunning chopped ‘do in March, Jules recently went back to long and wavy tresses, not only giving us major hair envy but hinting at a loose, natural look for the big day. “I don’t know if my hair will be up or down,” she told People late last year, “but I’ll keep it as natural as possible — with a little flair.” Given her edgy take on sweet and simple style, we don’t doubt that! She also noted that Brooks preferred her with no makeup at all. While we do see a lot of her natural makeup-free radiance in Instagram photos, it’s not likely she’ll skip it entirely for the big day. Most importantly, she said, “I want to look like me.”

We couldn't help but share another amazing moment from Dan + Steph's fairy lit reception under the stars in our garden ✨ Created by @avideas_, captured by @vanmiddletonphotography

2. Her wedding will be a white string light-free zone. Jules’ lifestyle blog is a great way to keep up to date on all things Hough — decor, fitness, style and more — and in one of only a few wedding-centric blogs, she drops a bombshell. Because of overuse, she says string lights are a no-go for her. “I’m just going to come out and say it,” she starts. “I think it’s time to take down the strings and perhaps move on to something new.” She goes on to detail a few rustic details that would look STUNNING in an outdoor setting, which is very much in line with the small detail her brother spilled back in August around the time of the engagement, telling People he expected “something outdoors, in nature.”

3. She MIGHT be wearing a Monique Lhuillier dress. While she may not have plunged into planning right away, Jules was definitely excited about dress shopping after her engagement. She even asked for help from her fans deciding what kind of dress she should wear, narrowing her choices down to romantic, boho, classic, non-traditional and chic. She was recently spotted browsing the selection of beautiful white gowns at Monique Lhuillier’s West Hollywood boutique, so there’s a chance the style she goes for could come from there. If so, she’d join the likes of Reese Witherspoon and Lauren Conrad.

Will you be watching for more wedding hints from Julianne? Let us know on Twitter at @BritandCo!