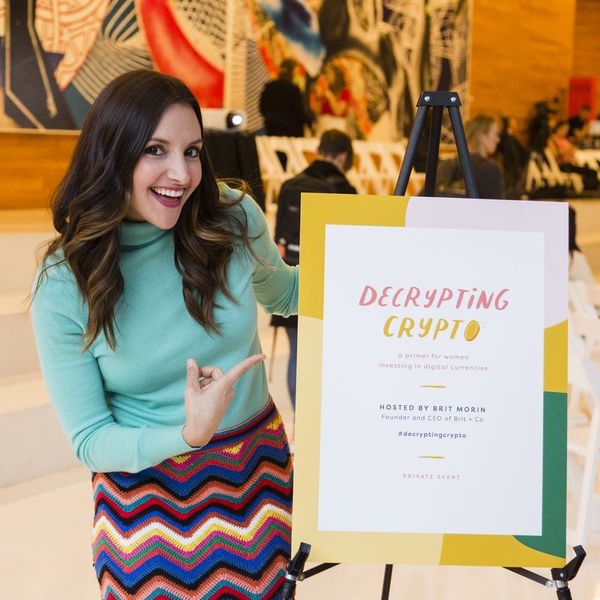 On Tuesday night, Brit + Co discussed all things Bitcoin, Blockchain, and more at Decrypting Crypto: A Primer for Women Investing in Digital Currencies. The event included some of the top thinkers and entrepreneurs from the crypto industry, with the goal of educating women on this growing sphere. Currently, women only represent four percent of investors in cryptocurrencies, now a $500 billion market, so the opportunities could be huge.

If you couldn’t attend the gathering in person or via live stream, check out the top five highlights from it below. Then, be sure to follow along with the buzz with hashtag #DecryptingCrypto.

1. Cryptocurrency is changing history. Dave Morin, Partner at Slow Ventures, set the tone for the night by telling us how cryptocurrency is changing the course of history, but not before providing some context around what “crypto” means exactly. In plain terms, cryptocurrency is a digital currency that uses encryption to ensure a secure transaction (Bitcoin was the first decentralized digital currency). While it had a very volatile (and public) past, it’s also had an incredibly fundamental one. “Up until this point in society, there were only a few currencies that dominated the conversation… It’s the first time in history that we’re taking things that weren’t currencies in the past and turning them into currencies that can be exchanged in various ways,” he said. Since the technology behind the digital money has finally caught up to enable these secure transactions, we’re left with an entire new form of exchange, none of which would’ve been possible without our next point…

2. Trust is everything. A major keyword of the night — Blockchain — was discussed in detail. For those of you who are unfamiliar, it’s essentially a server that allows you to send and receive money and keep a ledger in the crypto-sphere (Morin compared it to the likes of an email server). Since it’s not controlled by any one party, it’s redefining the way we rely on our financial institutions. As he put it, “It changes the ability for all of us to trust each other when we’re doing transactions through the internet… you don’t have to trust any one entity anymore. You can trust your own server in your house; you can trust anybody’s server on the internet. They’re all networked together and every single server has a copy of the ledger that the whole system is running on. And it’s completely decentralized; if one computer turns off, the network keeps running” Sending and receiving $$$ is now much more transparent and quick, since we’re bypassing traditional banking processes and putting these directly in the hands of the consumer.

3. Arianna Simpson shares why this trend is *so* talked about. If you’ve been around any major media sources recently, you’re probably well aware of cryptocurrency. But Arianna Simpson, Managing Director at Autonomous Partners and one of the 100 Most Influential People in Crypto, provided more details around why there’s so much hype. The “bubble activity,” as she called it, is merely just the beginning of a long-running trend. “The market has appreciated but is still relatively small. You don’t need that much money to move the market,” she said. So while you’re seeing big ebbs (people making a lot of money), there’s bound to be flows (price corrections/drops) to counteract them. Based on this, she emphasized the importance of not getting too caught up in these high points. “Major technological trends take decades,” she said. “Taking the time to understand [them] is critical to understanding the space.”

4. Good news — you don’t need to be an expert to get involved. If talk of Bitcoin, Ethereum, and ICOs makes your head spin, fear not. Some of the pros themselves are still familiarizing themselves with the industry. And Simpson is encouraging you to do the same. “There’s an unspoken expectation that you need to be an expert before you do anything,” she said. However, permission isn’t required to play around in the space. “Start dipping your toes in, read about it, do it physically, play around with it, you won’t really understand it until you’ve done it on a physical level,” she encouraged. All of this said, it’s important to keep one rule-of-thumb top of mind: “Don’t put in an amount that you’ll lose sleep over,” she said.

5. Here’s where cryptocurrency is headed. Nathana Sharma, Partner at Crypto Lotus and Faculty of Law, spoke to the future of cryptocurrency: “[It’s a] new economy we’re building… it’s an exciting gateway to learning about a whole new set of technology building out our future.” With potential for augmented reality integrations and day-to-day digital coin payment, there’s a lot on the horizon for cryptocurrency. And after last night’s summit, we’re eager to learn more.

Follow along with hashtag #DecryptingCrypto to see more from the event, then check out us @BritandCo for more inspo and info.