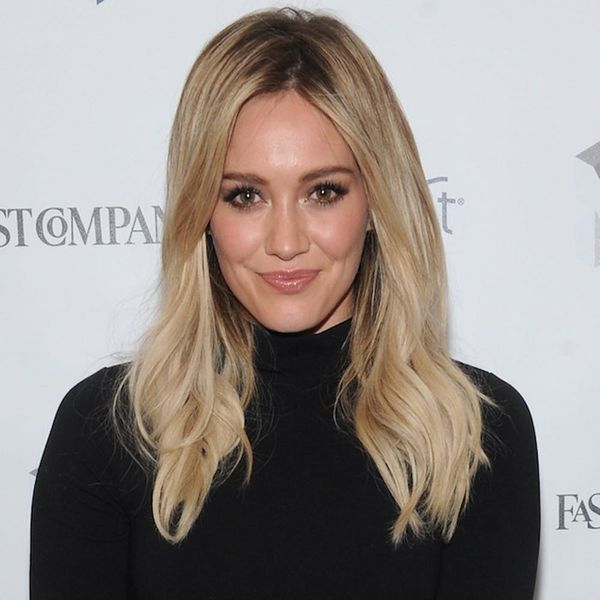 Hilary Duff is seriously making a bid to usurp Kylie Jenner as THE celeb hair chameleon. The star has gone gray (on purpose), gotten mermaid hair and cut off several inches back in September. Now she’s here again with a new look. And we gotta say, the celeb’s new hair will have you itching to pull the trigger on your own locks.

The Younger star wrapped her second season of the her TV Land show and promptly cut off all her hair. Ahh… there’s something so liberating about feeling those inches come off after you haven’t been allowed to switch up your coif in a while. The actress debuted this choppy textured bob done by celeb hairstylist Cynthia Vanis on Instagram yesterday. She wrote in the caption, “Soooo it’s pretty short. Thank you @cynthiavanis chopping.” Yep, it’s short indeed. Her new ‘do barely grazes her chin for super duper low-maintenance chic. Is anyone getting Ellie Goulding vibes here?

We love that she didn’t go sleek and shiny here, but instead with a messy boho look. You can score the same wavy locks with some texturizing or salt water spray.

Her stylist also posted a pic of Hilary’s discarded inches of hair along with the caption, “That’s a wrap on season 2 of @youngertv #shorthairdontcare @hilaryduff.” We’d guesstimate that’s a good four to five inches right there. Looks like Hilary is really embodying that whole new-year-new-hair thing.

BRB, heading to the salon.

What do you think of Hilary’s new haircut? Tweet us @BritandCo!

Kimberly Wang
Kimberly Wang writes about all things pop culture, tech, style, and beauty. She's a Bay Area transplant and has an MFA in Creative Writing from Columbia University. On a sunny New York day, you can find her hanging out with her mini schnauzer Isabelle Jellybean on a blanket in Central Park.
Celebrity Hair
Beauty News
Celebrity Hair Short Hair
More From Beauty News