Hilde Lysiak Is Giving Nancy Drew a Run for Her Money 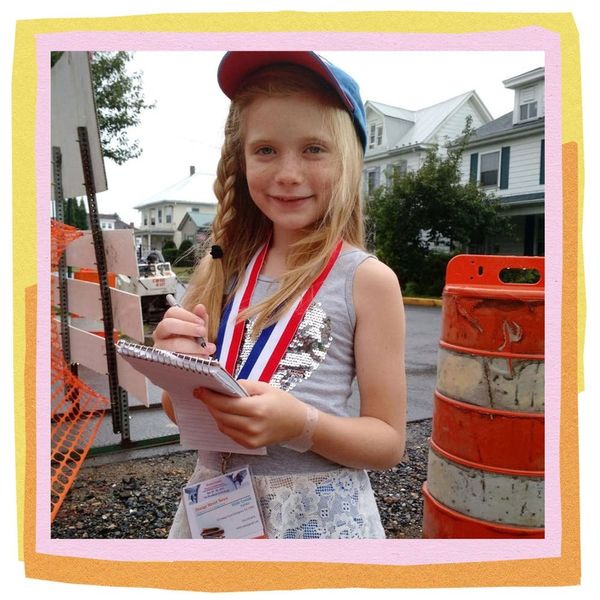 Hilde Lysiak Is Giving Nancy Drew a Run for Her Money

On April 2, 2016, nine-year-old Hilde Lysiak received a tip about a murder that had just happened in her hometown of Selinsgrove, Pennsylvania. As the editor-in-chief and sole reporter for her paper Orange Street News, Lysiak headed straight for the crime scene and was, in turn, the first publication to break the story.

Almost instantly, the internet erupted in a debate: Should a nine-year-old be reporting on murder? To that, Lysiak posted a video in which she looked straight into the camera and said, “I know this makes some of you uncomfortable. And I know some of you just want to me to sit down and be quiet because I’m nine. But if you want me to stop covering the news, then you get off your computer and do something about the news. There, is that cute enough for you?”

Lysiak’s fiery spirit and passion for crime reporting almost make her seem like a heroine plucked straight out of a classic children’s book. So it makes sense that now, on top of continuously reporting on the goings-on of Selinsgrove, Lysiak has a Scholastic book series in the works and a forthcoming Apple TV series, both based on her life. Below, Lysiak talks to us about being a young crime reporter, her undying love for Taylor Swift, and that 2016 murder that cracked her whole world wide open.

B+C: How did you initially become interested in journalism and reporting?

Lysiak: I grew up traveling all around New York City with my dad while he was a crime reporter for the New York Daily News. Everything about his job excited me. I’m a bit of an adrenaline junkie, and going to different crime scenes and talking to victims and trying to put the pieces together was intense. And seeing his work the next day on the front page of the paper was amazing. It felt important. I realized quickly that it was something that I was passionate about. When my dad stopped working for the paper and moved our family out of the city, I didn’t want to stop reporting. Then, I learned the town I was moving to didn’t have its own newspaper, and I knew exactly what I had to do.

B+C: Walk me through what a normal day looks like for you when you’re working and reporting for Orange Street News.

Lysiak: First, I get up, brush my teeth, and eat. Then I check my email. Sometimes I have tips and I follow them. If I do not have any tips in my email, I get on my bike and hit the streets and talk to people. I don’t ever sit around waiting for a story. I go out and talk to the people and find out what issues are important to them. Then I go out and report it.

B+C: What’s your favorite topic to report on?

B+C: Which of your stories are you most proud of?

Lysiak: Everyone thinks I am most proud of the murder story I broke. The truth is, that one was easy. I got a tip from a source, then door-knocked the scene to confirm and fill in the details. I was the only reporter there for hours! It was easy. The story I am most proud of is the drug investigation at Selinsgrove High School. I spent weeks talking to students and getting details about what was going on. It was very challenging, and after I published my story, it led to real changes in my community.

B+C: In your New York Times profile, your dad mentions that there are “a lot of people in town that don’t like you.” Why do you think that is?

Lysiak: I know a lot of people don’t like me. If you want to be popular, don’t become a reporter! Public officials have threatened to shut down my paper. I don’t take it personally. It is part of the job. My job is to find the truth, not take sides or worry about people’s feelings.

B+C: How do you respond to the critics who say you’re reporting on topics that are only for adults?

Lysiak: I’ve heard that. It makes me laugh! Critics like to say the topics I am reporting on should be left to adults. But if that is the case, why aren’t the adults covering these topics? Why aren’t they covering the drug problem? Or the vandalism? Or the corruption at the local fire department? Where are all these concerned adults? They were all just sitting at home posting rude comments on Facebook. The Orange Street News was the only one covering these and hundreds of other important stories that the people needed to know. If the adult media was doing their job, there wouldn’t be any place for the Orange Street News. If people don’t like my paper, no one is forcing them to read it.

B+C: What do you hope to change about the world of journalism and reporting?

Lysiak: I want to change the idea that reporting is only for certain people who went to fancy schools and look a certain way. I want people to understand that anyone with a passion for the truth can be a reporter. They don’t need to go to college or live in New York City. They just need a pen, paper, and a lot of curiosity. I wish there were a million kid reporters all across the world snooping around and digging up stories.

B+C: Let’s talk about your book series! What was it like to go from writing for Orange Street News to writing books with your dad?

Lysiak: I’ve always loved writing fiction, so it wasn’t a big change. The best part is that I get to create these amazing worlds and characters. The books literally show kids how to be reporters. I love that. Another great part was that, since these were my books, I got to boss my dad around!

B+C: What do you like to do when you’re not working?

Lysiak: I like to make slime and listen to Taylor Swift. I also have a thing for conspiracy theories.

Lysiak: I hope in 30 years young people are judged by their ideas, not their age or gender. I want to walk around my neighborhood when I’m 41 and see armies of kids reporting the news, holding adults like me accountable.