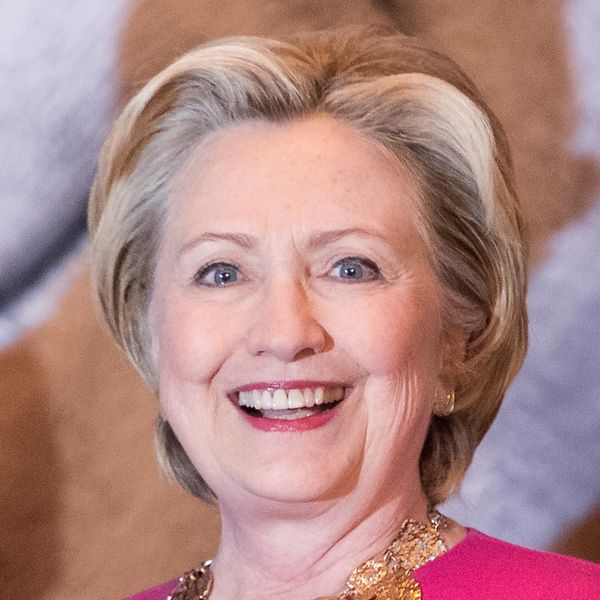 Hillary Clinton has always made statements with her outfit choices — as evidenced by her red Women’s Day pantsuit and other iconic looks. But HRC wasn’t always about the pantsuit. In fact, did you know she was a trailblazer for one of the hottest trends of today?

Back in 1993, a younger Mrs. Clinton wowed everyone when she was photographed in a cold-shoulder Donna Karan dress. On the eve of the first state dinner she hosted at the White House with husband President Bill Clinton, Clinton had her portrait taken by New York Times photographer Suzanne DeChillo. “As First Lady, she generated a lot of comment with that dress, her role in health care reform or whether she baked cookies,” DeChillo later told Time. “And now, I read that the dress is one of her favorites.” It was arguably one of the sexiest looks the former first lady ever wore.

The cold-shoulder trend was actually started by American designer and Clinton’s pal Donna Karan back in the early ’90s, and like most things ahead of its time, it caught a lot of flack. But then Liza Minnelli wore it to the Academy Awards in 1992 and the public changed its tune pretty quickly. While the slightly seductive number was acceptable for a Hollywood red carpet, it was a lot more controversial at the White House. Critics of the dress fell on both sides of the aisle — some loved it, while others hated it.

Clinton was honored at Donna Karan’s Urban Zen Foundation Gala in NYC last month, and she opened up about the now infamous dress. “[Karan] has always been ahead of her time, from her appreciation for strong, empowered women to, yes, the cold-shouldered look, which single handedly she is bringing back,” she said. “I think the dress she designed for me in 1993 had a lot to do with it. It just takes a while for people to catch up to Donna’s pioneering spirit.”

It’s not the first time Clinton has spoken about the now-iconic gown. In an interview with Lena Dunham for Lenny Letter back in 2015, the former presidential candidate said, “This is what’s called a cold-shoulder dress and I wore it for one of our first big events at the White House, in 1993. And like everything I do, it turned out to be controversial. I’m hardly a fashion icon.”

We beg to differ, Hills! For a look that caused a major stir more than two decades ago, the cold shoulder is still on trend. Fashion is cyclical — so what’s old is always new again.

What do you think of Clinton’s dress? Would you rock a cold shoulder? Tell us @BritandCo!

Shea Lignitz
Shea can be found in the nearest bookstore or brewery, exploring the great outdoors, or blasting Led Zeppelin. She grew up in the cold and rain of Northern California's redwoods but is currently wandering around Texas.
Nostalgia
Celeb Style
Nostalgia Politics