What I Learned Hot Air Ballooning Over the Nevada Desert 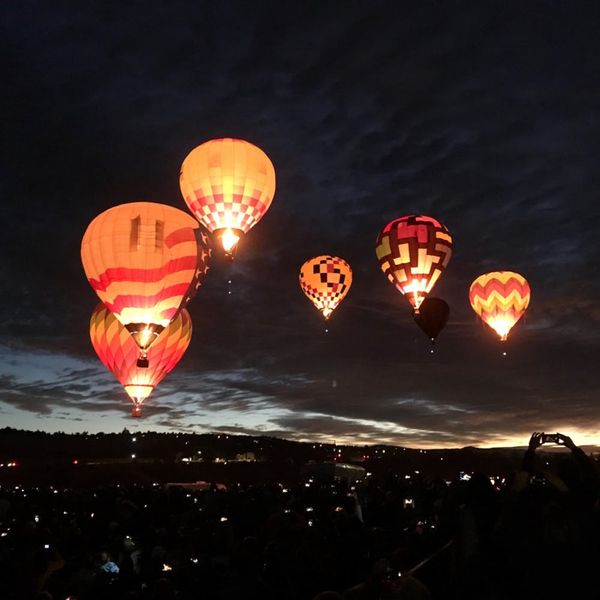 It was just after sunrise on the morning of the Great Reno Balloon Race. The largest free hot air balloon festival in the world draws a crowd of 120,000 to northern Nevada every year at the beginning of September. The night’s darkness was only just fading as I waited by the basket of a hot air balloon in the middle of the Nevada desert. The balloon lay lank in the dirt as swarms of children and teenagers approached, asking for trading cards. Apparently the kids here collect them every year, but I didn’t know what they were talking about — I hadn’t even seen the shape of that hot air balloon slack on the ground, though I was informed it was a flying squirrel.

More and more local kids approached me for a card. They’d been racing from one moored balloon to the next, looking for a small memento. Discovering I wasn’t quite the ballooning expert, they loitered, looking at me with envy and awe. “How did you get to ride in one of those?” “I’ve always wanted to go up in the sky!” Observing every year from below, they might never ride in a balloon, but today I was going up and away from the festival crowds.

There’s something inherently romantic about a hot air balloon — something nostalgic, wistful… and vaguely unreasonable. That morning, I arrived at the event at 4am, only to be scolded by one of the “aeronaut” volunteers. He couldn’t fathom how I could arrive so late: “What are you thinking, woman?” The rest of the crowd had assembled before 3:30am, waiting for the Glow Show, when the balloons would light up against the night sky, then the Dawn Patrol, when a very select few would start to rise into the morning chill. Watching the Dawn Patrol from below, the whole enterprise looked terrifying: the open fire, the perilous balloon. Now, I was about to ascend.

“If we don’t take off now, we’ll never make it up in the air!” the captain, Mark, shouted towards one of the aeronauts. Chaos swirled around me as the captain got the go-ahead to fire up his balloon, and I felt a flash of warmth as he sparked the lighter on the fire. The unpredictable wind was waning as the balloon, still on the ground, started filling with air. We rose in a swirl of dust and sand, and I watched as the kids and teenagers and grandparents alike looked up from below.

Of course, the conditions above the ground were concerning — when is it not concerning to propel yourself up into the sky in a basket beneath a shroud of hot air? I watched as the mountains of the Sierra Nevadas slowly came to my eye level, then looked around at close to a hundred other balloons around us in the sky. They were jarringly vibrant against the muted landscape: dirt and sky, endless faded shades of light brown and blue. My friend and I huddled in the basket alongside Mark, a confident, handsome man who only added to the fantastical feeling of our endeavor. He’d trained to be a pilot, and he sounded (and looked) like one too, with a deep voice and a sure demeanor. But, he told us, there weren’t many jobs in flying airplanes, so he went to Florida, where he saw his first hot air balloon floating overhead. No one was really flying balloons in those days, but Mark was transfixed by that sight in the sky. “Right then is when I knew what I would do. I decided, ‘I’m going to fly a balloon, have a lot of fun, and get rich.’” He fired up the burners to give us more lift. “I’ve had a lot of fun.”

When I asked if the Great Reno Balloon Race was his favorite, Mark nodded as he thought and looked out again toward the foothills of the Sierra Nevadas. Just to the west, over one of the mountain ranges, Lake Tahoe awaited. Its world of deep blue water and tall green trees felt impossibly far away, though it was less than a 40-minute drive. While Mark was competing to drop a flag on a certain mark in the distance, the money or the competition seemed beside the point. “It is,” he decided. “It’s a nice ride.”

The sky was cloudless and pale against the beige foothills of the mountains, the landscape of the Southwest notable for its starkness. The scores of balloons in the sky popped against the two-toned backdrop of the Nevada sky, their bright colors offsetting the starkness of the desert. Our captain couldn’t exactly steer the balloon: All he could do was use the trapped heat to propel it up and down to catch different currents of wind. He had to be attuned to the subtle changes, the variance in pressure — but if there wasn’t a breeze to follow, there wasn’t much he could do. I checked my Instagram, I texted a few friends. I took a selfie with the one who’d joined me. Then I drifted off into silence, a rarity for me. I felt calm and still.

From the ground, the hot air balloons seemed majestic and even terrifying — the fires burning against the dawn sky, the balloons hovering in the breeze. But up in the air, in that stillness, I felt serenity, an intangible lightness. When up in the air, the fire was covered, the world was silent. The crowd of over a hundred thousand people assembled below felt light-years away. Maybe, to transcend, we need to just float, to trust, to just exist, in stillness. I was reminded of the final words in the memoir Wild, when Cheryl Strayed finally attained enlightenment after a grueling hike of the Pacific Coast Trail: “How wild it was, to let it be.”

Of course, moments later, when we crashed to the ground, I nearly forgot this enlightenment entirely. But as I tumbled out onto the dirt and reflexively checked for my phone, I remembered the stillness from moments before. Such meditative silence is hard to come by these days.

Maybe we do need to go up, up, and away to find it again.

Tag us in your latest travel adventure on Instagram.

Katherine Parker-Magyar
Katherine is a freelance writer focusing on travel, culture, lifestyle, and politics. Her work has appeared in The Week, Tasting Table, Elite Daily, POPSUGAR, and Electrify, among other publications. She's traveled to all 50 states and 40 countries, but calls New York City home. Follow along on Instagram at @katherineparkermagyar or visit her website at www.katherineparkermagyar.com.
Creativity
Travel
Creativity inspiration Vacation
More From Travel