How Comedian Ms. Pat Turned the Story of Her Harrowing Youth into One of the Year’s Most Moving Memoirs 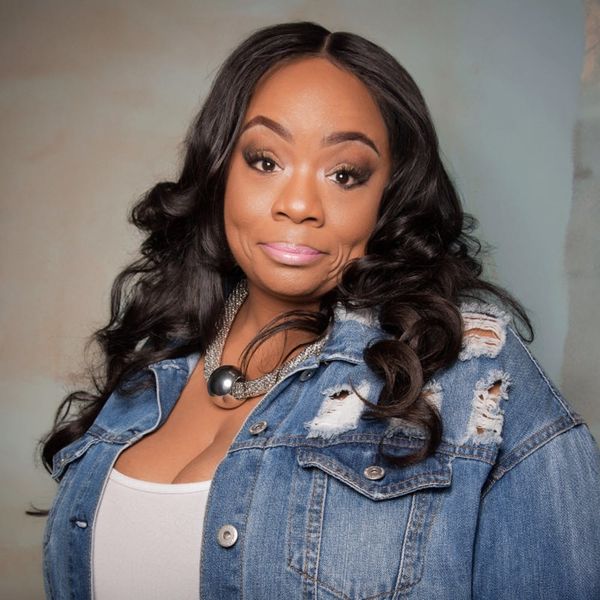 There’s a saying that comedy is tragedy plus time. In the case of comedian Ms. Pat (full name Patricia Williams), that link is tough to dispute. Wiliams came of age at the height of the crack epidemic in 1980s Atlanta, one of five children born to an alcoholic mother in one of the city’s toughest neighborhoods. After becoming a mother at age 14, Williams was forced to leave school and rely on hustling and dealing drugs to provide for her young family. By the end of her teens, she was a convicted felon.

Fast forward to now. Ms. Pat is a rising-star comic who’s performed on Comedy Central’s This Is Not Happening and NBC’s Last Comic Standing. She’s performed at comedy festivals, made appearances on TV shows, and is a regular on some of the country’s most popular radio shows and podcasts, including the syndicated Bob and Tom Radio Show and Marc Maron’s WTF podcast. She lives in a suburb of Indianapolis with her husband and their brood, in what Williams’ new memoir Rabbit describes as “a six-bedroom house overlooking a man-made pond with a bunch of ducks swimming around in it.”

If you’re wondering how a person might go from being a teen mom selling drugs to survive, to a suburban housewife who moonlights as an in-demand comedian, Rabbit tells Williams’ incredible story. Written in partnership with journalist Jeannine Amber, the book details a life riddled with hardships beyond what any human being should ever suffer. And yet, as told through Williams, the stories become a laugh-out-loud hilarious portrait of human resilience.

We spoke with Ms. Pat about the book, the harrowing struggles too many women silently endure, and about why she decided to tell her story.

Brit + Co: You say in the book that people will often watch The Wire, or something like it, and come away thinking that they understand what it’s like in the ‘hood when the reality is very different.

Ms. Pat: Very different. Especially for Black girls. Our stories are never told. I think we’re invisible to the world. We don’t exist. You hear a lot about the Black man, or the Black person, growing up in the ghetto, or in the Black community, but you never hear the side of what we go through. I don’t know why. It’s as if only African American boys, or men in general, have it rough. We have it rough too, some of us.

It’s harder being a female in America, anyway. We don’t get treated equal to men anyway, right? So, try being a Black, poor one.

B+C: Is that why you felt it was important to tell your story?

Ms. Pat: I wanted to tell my story because people from all walks of life can relate. As a comic, when I’m standing onstage telling these stories, people relate. I met this white woman in Chicago after a show; she was there with a man wearing an ascot. I was like, “Ooh, he got an ascot on, he must have got some money.” She whispered in my ear: “I was a teenage mom too.” It was an eye-opener to me that people in all races could relate to what I was saying. The difference is that I was telling my story onstage, and most of them had never told their story. I thought these problems only happened in the Black community, but it happens to all of ‘em.

B+C: How has your family responded?

Ms. Pat: Some of my extended family don’t like it, but my husband and kids are so proud of me. My husband is such a big fan of this book. And my kids are very proud. I’ve been through so much in my life — most kids, they try to make their parents proud, but I’m always trying to make my kids proud of me. I didn’t have the start that most people had.

B+C: You say in the book that you got out of a life of crime because you wanted to. You saw a way out, and you went after it. What made you realize you had other options?

Ms. Pat: I didn’t realize I had other options. After I did time in jail speaking to this lady [who was also in jail], and other people, my mind started to realize a little bit more. When you’re not used to something, people gotta introduce you to stuff. In this world, it’s up to you to take what they’re trying to introduce you to.

Later, my husband came around and was like, “Hey, try this life. All you know is hustling and dealing and blah blah blah, but have you ever tried this life?” And I was willing to try. It wasn’t easy, but I hung in there. I wanted out [of illegal activity] and I was willing to try. And then me starting over, it wasn’t as bad as a lot of people think. But it was rough. I went from being a drug dealer to making $7.50 an hour. I was shocked. I was like, “Who the hell works for this kind of money?” But the way I grew up is not how the real world works.

B+C: But like you say, it’s so hard to leave the world you grew up in. It seems like there isn’t a lot of support for people who want to turn their life around.

Ms. Pat: Well, I’ll tell you this. The biggest struggle I had in life was being a convicted felon. There’s not enough support for that. When you apply for a job, you can’t get a job because of something you did 10 or 15 years ago. When I was applying for jobs, I heard so many “No”s. In 2008 I lost a job at a gas station because I was a convicted felon. So you tell me, that in the greatest country in the world, I’m not good enough to sell gas? That I’m not good enough to sell Snickers? There needs to be a better program for people like me who haven’t committed a crime in 20 years. I got a brother who made mistakes when he was in his teens, became a convicted felon, and struggles to this day. Nobody will give him a decent job and he’s almost 50.

What ideas do you have to support those working to build a new life? Tell us @BritandCo.

Kelli Korducki
Kelli is Brit + Co's Senior News Editor. Her interests include sensible footwear and glasses that take up 25 percent of her face.
Books
Empowerment
Books
More From Empowerment