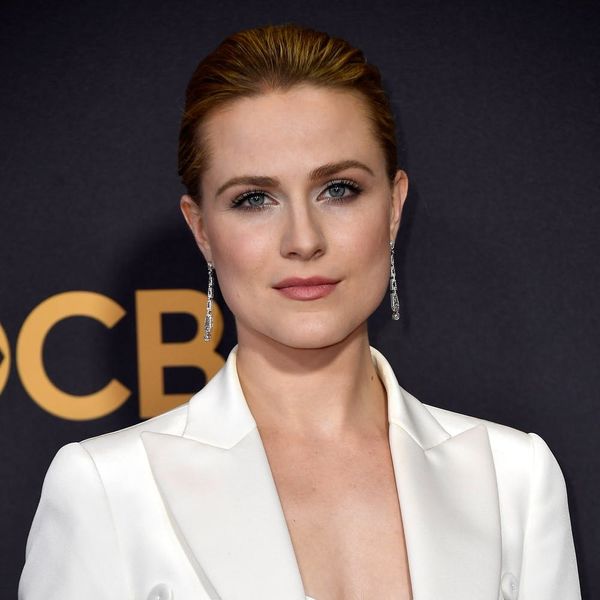 Evan Rachel Wood is a fabulously fearless woman. She’s not afraid to take on Hollywood heavyweights (including director Bernardo Bertolucci and even Ben Affleck) regarding important issues, and she’s brave enough to open up about her own struggles and self-care, including the fact that she recently sought out trauma therapy — in part because of her Westworld character.

Taking the stage at the Forbes 30 Under 30 Summit in Boston this week, the Emmy-nominated actress revealed that her portrayal of Dolores on HBO’s Westworld resulted in an incredibly important IRL change. “She’s been abused for about 30 years,” Wood said of her character, a robot meant to entertain guests at a Wild West amusement park. Dolores’ life is undeniably traumatic, but the actress who plays her thinks that she’s a “survivor” who is “not broken,” despite what she’s been through.

“She even has pity on her abusers,” Wood said, adding, “She rises above it, and that gave me strength in real life, and actually helped me come to terms with a lot of my trauma and my repressed memories. It got me to go to trauma therapy and actually deal with things that I hadn’t dealt with at all. So, she’s really changed my life.”

Wood has been open in the past about her mental health struggles. In a speech at the 2017 Human Rights Campaign North Carolina Gala earlier this year, she said she felt “broken and unlovable” before coming out as bisexual. She also opened up to Rolling Stone about her attempted suicide at age 22.

“My biggest challenge I’ve ever overcome was myself,” she said at the Forbes summit. “Nobody held me back more than me, and nobody was meaner to me. I shouldn’t even be here, and I tried not to be a couple of times… [I]t’s really hard to get help, the right kind of help. And it’s hard to even admit to yourself that you need help. And people are so terrified to ask for help.”

She added that her self-care is now focused on self-love, saying, “[I]t was learning how to love myself in all my messy glory — the great things about myself, but also my imperfections, and [to] know that no one’s perfect; we’re always learning, and that’s a good thing. When you make mistakes, it’s just proof you’re trying. It’s like, what are you going to do with the mistake? Are you going to learn from it? How are you going to grow from this? What’s the lesson here? Keep asking yourself questions.”

Has a fictional character ever inspired you to change your life? Let us know @BritandCo.