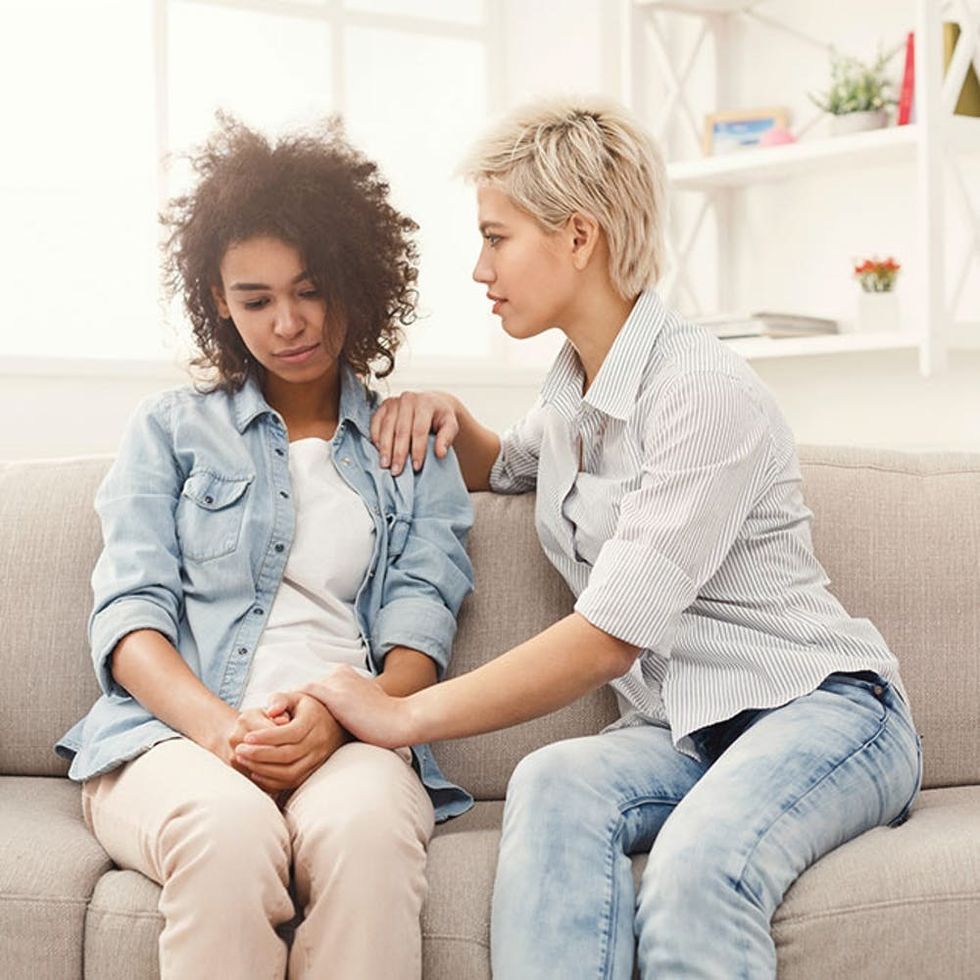 You just got the call from your friend: It’s over between her and her S.O. You barely have time to ask whether she was the one to initiate the breakup or the one to be totally blindsided before you jump in the car to pick up a pint of the most decadent ice cream you can find to bring her. For the next few days, you’re on call, ready to talk about her feelings or just watch a chick flick (or maybe a slasher movie) with her at practically any moment. No one wants to see their friend in pain, but you’re going to do everything you can to support her through her hard time.

You’re a rock star of a friend, and we have no doubt that your BFF will appreciate all of your efforts to keep her out of the fetal position. Still, it’s entirely possible that, over the course of the breakup aftermath, you might accidentally let a comment slip — with all of the best intentions! — that’s actually going to make her feel worse. We asked relationship experts to help us break down the things you should never say to a friend who’s going through a breakup. Scroll down for all the deets.

1. “I totally get it.” Look — we’re not saying you don’t get it. If you’ve been through a breakup yourself, it’s valid for you to empathize with your pal. This is a natural reaction, especially if you want to help your friend see that, like you, she can rise above her current heartbreak. Still, licensed marriage and family therapist Erika Boissiere does not recommend this conversational strategy. “Often, we don’t understand the heartache in the truest sense,” she says. Alternatively, Boissiere suggests using language like, “What’s been the hardest thing for you during this breakup?” or “What do you miss the most?” Doing so will make your friend feel like she has an open invitation to share her experience with you, even if you can’t relate to each other on the details.

2. “There are plenty of fish in the sea.” Yes, it’s a cliché, but one that many a friend has employed to try to get a smile out of a newly single BFF. If this is one of your go-to post-breakup lines, you might want to think again. According to Eileen Purdy, a therapist specializing in anxiety, statements like this often come too soon. “A person who is sad and upset needs to know that it’s okay to be sad and upset,” she tells us. “The best way we can let them know this is by not trying to fix things or shift their focus on to the next. This well-intentioned attempt to reassure your friend that everything is going to be okay communicates instead that you might not be comfortable with their difficult emotions and are trying to get them to stop sharing.” And that’s obviously not what you’re going for.

3. “You’re better off without them.” You could be right. Your friend’s freshly minted ex might be unfriendly, brash, or otherwise offensive. They may have lacked ambition or been unable to commit. Worse, they might have treated your BFF poorly. That doesn’t mean that now is the time to say so! “Your friend is already having feelings of loss, failure, hopelessness, [and] even shame,” dating and relationship coach Bobbi Palmer says. “They may be questioning their choices and even their worth. To say this tells them that they were making a mistake all along and that they were wrong for caring about that person. This only adds to their sense of failure.”

4. “Next time, you’ll know to do things differently.” Regardless of the circumstances of the breakup, what your pal doesn’t need right now is a postmortem on the role she played in the demise of her once-relationship. You might feel like you’re being constructive, but this approach just isn’t cool. If you think your friend really does need some help in the relationship department so she can find herself in happier, healthier partnerships in the future, licensed psychotherapist Tina B. Tessina says that you might suggest that she see a therapist (after the dust has settled, of course).

5. “You have to love yourself before you can love other people.” If your friend wanted to hear this piece of wisdom, she could easily turn on The Bachelor or The Bachelorette. It’s a lot more difficult to hear — and apply — it IRL. “While it’s always a good idea to focus on personal growth and development after a loss, telling someone to 100 percent love themselves is a tall order,” psychotherapist Julia Lawrence advises. Don’t put additional pressure on your friend to dive into personal growth and self-love smack in the middle of an emotionally challenging time.

6. “Your ex never deserved you anyway.” Now is not your moment to unleash all of the grievances you had against your pal’s former flame. Their relationship might be over, but that doesn’t give you the right to start rooting against them. Your friend will feel as if she’s lost your support. Plus, you never know what the future holds. “Your friend may agree in the moment, but what happens if [she] and this person get back together?” therapist and coach Tess Brigham asks. “Now you’re the friend who said you thought they were a loser and a jerk.” Taking this stance could cause uncomfortable distance between you and your bestie in the future.

7. “It’s for the best.” Nothing about a breakup feels like it could fall under the category of “the best.” “Your friend is in pain and clearly does not feel this is for the best at the moment,” clinical psychologist Julie Gurner tells us. “What’s usually best is that you listen to your friend, hear their struggles, and genuinely support them where they’re at.”

What advice do you usually give to a heartbroken friend? Tweet us @BritandCo!

Alli Hoff Kosik
Alli Hoff Kosik is a freelance writer who is passionate about reading, running, rainbow sprinkles, her lipstick collection, watching embarrassing reality TV, and drinking pink wine. She lives in Brooklyn with her husband and (in her dreams, at least) three golden retriever puppies. Listen to her talk books on The SSR Podcast.
Dating
Relationships
DatingFriendsLoveRelationship Advice