13 Times 'Jane the Virgin' Made Us Ugly Cry 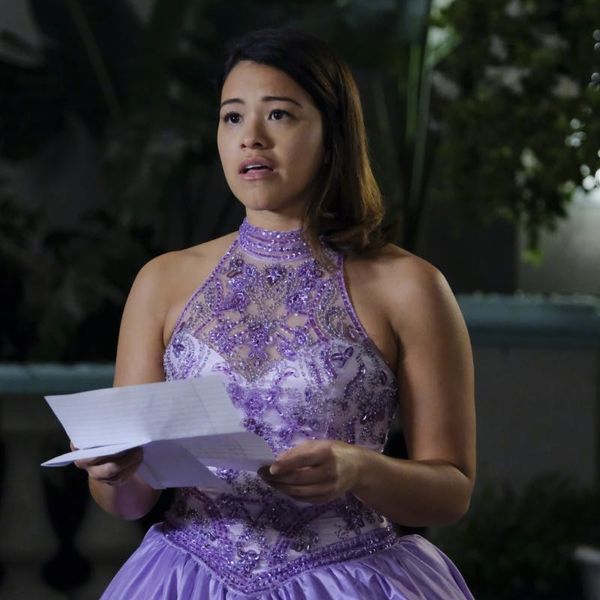 As Jane the Virgin grows ever closer to the end of its fifth and final season, we can't help but feel nostalgic for days and episodes gone by. We've shared a lot of love and laughter with Jane and her family over the past few years, and we've cried a lot of tears, too — not as many as Gina Rodriguez, of course, but still, a lot. And can you blame us? Few shows so deftly weave delicate topics like grief and faith and family history into telenovela-worthy plots about crime lords and evil twins. No matter how wild things get, Jane never loses its heart. Click through to see some of the most emotional moments from the show's run. (Warning: There are spoilers for all five seasons here, through the April 10 episode, so if you're not caught up, proceed at your own risk!) (Photos via The CW)

When Jane Gave Birth: We knew we'd be emotional when Jane finally welcomed her son. We didn't know the show would juxtapose scenes of her in labor with flashbacks to Xo in labor 24 years earlier, or that Xo would give Jane the same speech that Alba gave her when she was too tired to push: "Five more minutes of pain, for a lifetime of happiness. So push, or I'll yank that kid out myself." (It was more moving than it sounds.) (Photo via Patrick Wymore/The CW)

When Jane Held Mateo for the First Time: Jane's accidental insemination and surprise pregnancy were not part of her life plan. But the moment she held Mateo in her arms for the first time, none of that mattered. She cried, Rafael cried, we cried — it was a whole thing. And then the narrator piped in with this: "It should be noted that at this very moment, after everything, Jane's heart… was full." Honestly, same. (Photo via Greg Gayne/The CW)

When Mateo Was Baptized: We love Jane's romantic drama as much as the next fan, but our favorite relationship on the show is the one between Jane and her mom and grandmother. So you can imagine how we felt about Mateo's baptism ceremony, when Jane read a speech that her grandmother had written for Xo's baptism, and that Xo also read at Jane's baptism. Cue all the tears. But don't just take our word for it — read the whole speech for yourself below. (Or better yet, watch Gina Rodriguez read it.)

"My precious child, these are the things I hope for you and your life. May you be bold. May you be brave. May you be loving and joyful and kind. May you carry with you the vitality and spirit of the generations before you. Whatever you dream for your life, may you summon the strength to follow that dream. May you always let your faith be greater than your fear. May you never forget, through all of life's adventures, through every moment of every day, that I walk beside you, cheering you on. Hoping for you, praying for you. Loving you." (Photo via Scott Everett White/The CW)

When Michael Said His Vows in Spanish: Even Team Rafael fans have to admit that Michael's wedding vows were pretty romantic — not because of what he said but because of how he said it. He recited them in Spanish, as a surprise gift to Jane! And Alba was in on it, which made the whole thing even sweeter. (Photo via Scott Everett White/The CW)

When Michael Was Shot on His Wedding Night: We knew Michael and Jane wouldn't just ride off into the sunset after their wedding, but we had hoped the show would give them (and us) at least one night of uninterrupted joy before everything fell apart. Unfortunately, their honeymoon period was cut painfully short when Sin Rostro — who'd been masquerading as a detective — shot Michael in the hallway outside his hotel room, as Jane waited inside. (Photo via Scott Everett White/The CW)

When Michael Died: We thought Michael was in the clear when he survived the shooting on his wedding night, which made his sudden, shocking death — of complications related to the gunshot, 10 episodes after the fact — all the more devastating. We know now, of course, that Sin Rostro faked the whole thing and gave him amnesia, but at the time it felt very, very real. And when Jane got the call and fell to the floor sobbing, well, we sobbed right along with her. (Photo via Colleen Hayes/The CW)

When Jane Wrote a Book About Michael: In Jane's world, three years passed between Michael's death and Jane's first reading of the book she wrote about their romance. In our world, though, it had only been seven days. So when Jane got up (after a pep talk from Rafael) and read the first chapter of her novel — which had a much happier ending than their real love story — we basically dissolved into a puddle of tears. (Photo via Robert Voets/The CW)

When Xo and Ro Finally Said "I Do": Xo and Ro's wedding day, not unlike their relationship, was a bit of a bumpy ride, which made the moment when they actually exchanged vows that much more rewarding. As Jane said at the ceremony, their romance was not the perfect, meant-to-be, fairy-tale kind. In fact, it was kind of a mess. But through that mess, they continued to choose each other and fight for each other and love each other. What's more romantic than that? (Photo via Greg Gayne/The CW)

When Jane Read Michael's Letter: The night before Michael and Jane married, Michael wrote his bride-to-be a love letter. Jane never knew about the letter, though, so over time and in the course of multiple moves, it got left behind and then lost. When it finally made its way to Jane — via her first love, Adam! — it was just as beautiful as Father Gustavo promised it would be.

In the note, which we heard in Michael's voice over a flashback to when they met, he recounted all the little things that led him to her house that fateful night. "That's not just a series of coincidences. It's destiny. And I never doubted you were mine," he wrote. "And never doubt, that all I want, forever and always, is for you to be happy." BRB, crying. (Photo via Scott Everett White/The CW)

When Xo Was Diagnosed With Breast Cancer: Xo's diagnosis came out of nowhere, as these things tend to do, and immediately turned her life upside-down. The shock reverberated through her family, too, especially when it came time for her to decide how she wanted to handle her treatment. Her conversations with each of her loved ones — about her fears, her relationship to her body, and their relationships to her — represented Jane the Virgin at its best and most impactful. We could cry just thinking about it. (Photo via Michael Desmond/The CW)

Really Just Everything About Xo's Cancer Battle: Seeing Xo in so much pain, both emotionally and physically, broke our hearts. There was a brief glimmer of a bright spot when she made friends with a fellow patient, Donna (played by the lovely Amy Brenneman), but then Donna died, leaving Xo alone again and more afraid than ever. (Photo via Tyler Golden/The CW)

When Alba Became a US Citizen: Everything about Alba's path to citizenship — from Xo's impassioned speech convincing the USCIS officer to let Alba take the test after he denied her entrance for being two minutes late, to Alba's recitation of the oath of allegiance as she flashed back to a conversation with her late husband — made our eyes well up with tears. And then, when Alba gave that speech at her party, we lost it for real. (Photo via Paul Sarkis/The CW)

When Michael/Jason Remembered Everything: Like Jane, we had a lot of mixed feelings about Michael/Jason's sudden return from the not-dead-after-all. Also like Jane, we did not love Jason, so we were not especially sad to see him go. That is, until his fishing rod got caught on the archway at her house, showering him with paint chips (like the first time they met) and seemingly restoring all of his memories. We love Rafael, and we love where he and Jane are (were?) headed, but we felt all the things when Michael's heart started glowing. (Photo via Tyler Golden/The CW)