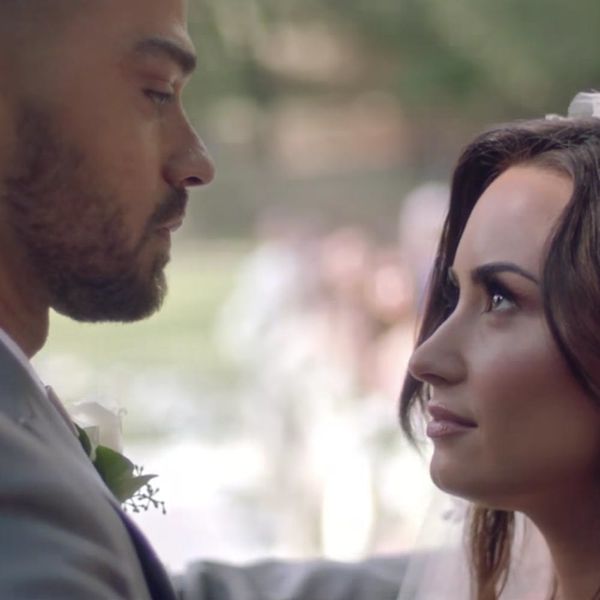 When a pic of Demi Lovato in a jaw-droppingly gorgeous wedding dress popped up on Instagram recently, we had a sneaking suspicion that it was related to her next music video. And it looks like we were right — though that doesn’t mean we were in any way prepared for her “Tell Me You Love Me” visuals, which feature Jesse Williams as the ultimate heartbreaker.

The 25-year-old singer and the 36-year-old Grey’s Anatomy actor star in the video as two people who are very much in love. Theirs is a roller-coaster romance, with both steamy and sweet moments that will have you swooning… before it dissolves into distrust, jealousy, fights, and shattered dreams.

The video (which is basically a six-minute movie) starts with a proposal and a diamond ring, giving us hope of a happily-ever-after as the singer repeatedly asks her fiancé to “tell me that you love me.” But it’s soon obvious that there are issues in this relationship, including wandering eyes and texts from someone named Erik. “You wanna just fight? Pick somebody else,” Williams yells, to which Lovato replies, “I don’t want to pick anybody else. I want you!”

For a while, as the beautiful bride walks down the aisle, it looks like the two will overcome the rough patches in their relationship — but the twist at the end will leave you crushed.

Watch it for yourself below, but be warned: If you’re an emotional person (or just in a really sappy mood), this vid may make you cry!

What do you think about Demi Lovato’s new “Tell Me You Love Me” music video? Let us know @BritandCo!