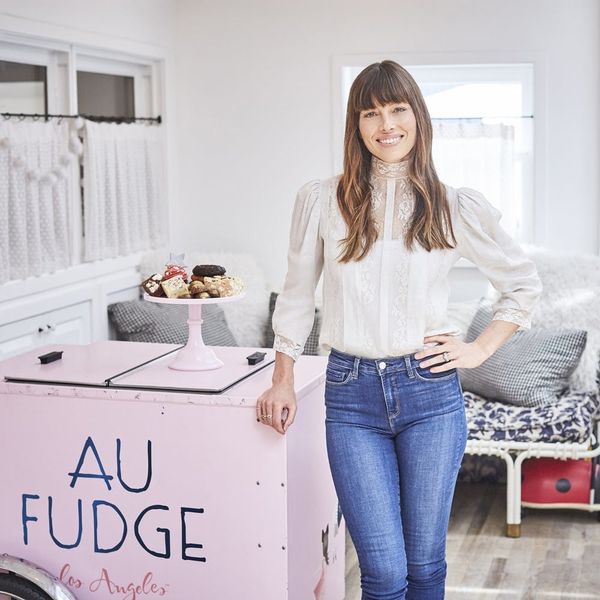 How amazing would it be if you could drink and dine at an establishment that served uber-pretty unicorn desserts, offered healthy vegan entrees, boasted a *ridiculously* cool tree-house, included a fully stocked bar, AND provided on-site childcare all the while? Well, that’s the concept behind Jessica Biel’s new restaurant Au Fudge, a bar and cafe in Los Angeles that only recently opened its doors. This restaurant literally has everything hip parents could ever want, with an absolutely gorgeous and sunny atmosphere to boot. Delish sat down with Jessica to chat about Au Fudge and what inspired her to make such a unique establishment.

Jessica says that she and her partners decided to focus on what they do best, rather than on one particular demographic.

“You cannot be everything for everybody, and I think we sort of got into that idea for a minute, like, ‘oh yeah, we could be for people with kids, people without kids, an older demographic, a younger demographic. It was impossible, so we’re focusing on what we do best.”

And what do they do best? Well, baking comes to mind.

Beyond the team’s baking capacities, they also serve an array of tasty cafe entrees, including items such as a vegan Caesar salad and chicken nuggets with fries, among other delights. In fact, that vegan Caesar salad is probably Jessica’s favorite item on the menu. It features an amazing blend of flavors ranging from cashews and cayenne to avocados, golden raisins, and quinoa.

“I had a lot to do with, or a lot of input on, the salads. My go-to order would be the vegan Caesar… it’s got this great balance of flavors.”

Essentially, Au Fudge is a playground for both parents AND kids.

“People are enjoying it, kids are loving it, and families are happy, and that’s what we care about,” Jessica says.

Maggie McCracken
Maggie McCracken is a freelance writer, blogger and aspiring digital nomad. She writes primarily about food, travel, yoga and healthy living, and she has a background in health and science journalism. You can read more of her work on her lifestyle and travel blog, The Olive Branch.
Food Trends
Food News
Food Trends
The Conversation
Reviews:
More From Food News