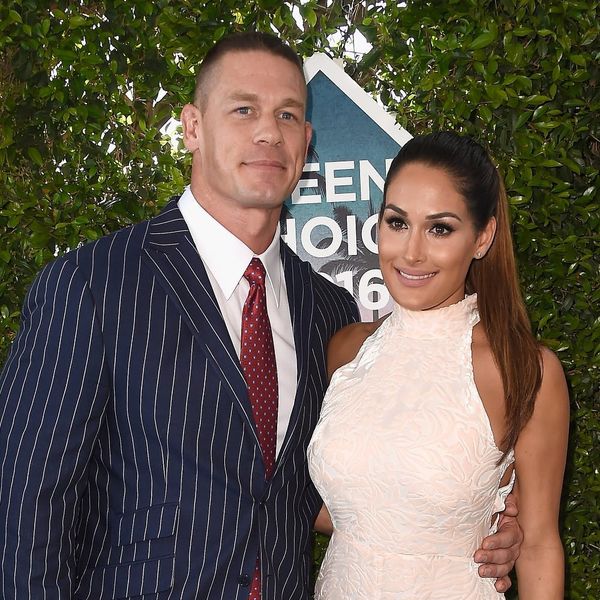 John Cena had one heck of a victorious night at Wrestlemania 33. He and his love, Nikki Bella, won their match together, AND the wrestlers got engaged during a moment that shocked and thrilled the already amped-up audience. And now, as fans continue to fawn over the unusually romantic sitch, we’ve found out that Cena’s proposal not only included a surprising detail, it turns out that Cena had already told Bella that he was going to propose… but she didn’t remember!

The story apparently goes back at least a year and a half, as Cena revealed while chatting with Al Roker on the Today show this morning. The 39-year-old wrestler gave us a little background on the sitch, saying, “[Nikki] has been by my side through a lot of surgeries. I know when they put you under anesthesia, you have, like, 20 minutes when you’re out of it but you can talk and you don’t remember what’s going on.” True enough. And it turns out that the couple has been known to use the unguarded moments as a kind of “truth serum.” In the past, Cena has told Bella, “They’re going to put me under. Ask me whatever you want. You’re going to get the answer.”

While we don’t know what Bella may have asked Cena, he continued by revealing that eventually, the tables turned when Nikki Bella needed neck surgery last year. Cena admitted, “When they put her under, I made sure to be the last one to wheel her into the OR. At the moment of no return, I stopped the doctors, and I leaned down and asked, ‘Can you hear me?’ She said, ‘Yes.’ I said, ‘Well, I have one question for you,’” he recalled, and when she asked him, “What?” He replied, “You know someday I’m going to marry you?” Eee! So sweet!

The only catch, of course, is that Bella has absolutely no memory of the conversation and whenever she asked him what was said, he would refuse to answer, merely claiming that he’d let her know “when the time was right.” Thankfully for the duo, the time was right last night. In fact, considering she said yes, we’d say the timing was downright perfect.

What do you think about John Cena’s surgery truth-telling story? Let us know @BritandCo!