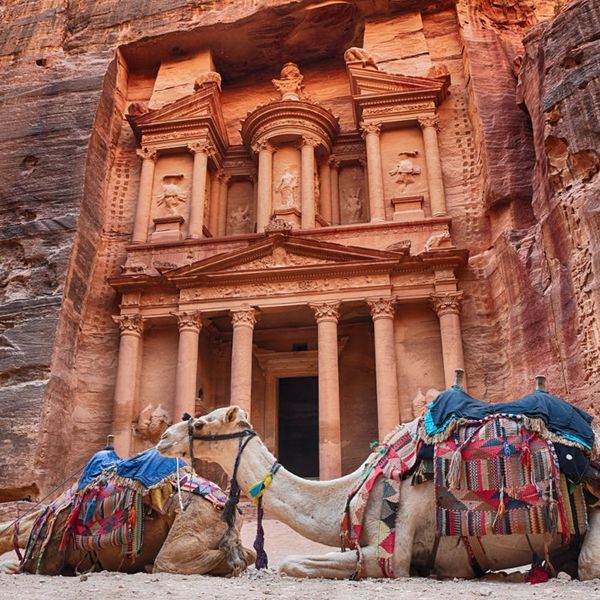 While the rest of the Windsors gathered in London to welcome the royal baby this April, Princess Beatrice jetted off to Jordan with the likes of Karlie Kloss and Ellie Goulding. Rather than fete the youngest heir to the British throne, she palled around with Crown Prince Hussein, heir apparent of Jordan. Though her shirking of family protocol was received with a bit of shock, her choice of destination didn’t break with tradition.

Jordan has a long history with the royal family: the nation’s monarchy was created by the British in the wake of WWI and, a century later, the British royals remain partial to the country’s charms. The country’s photogenic, Deerfield-educated royal hosts certainly add to the appeal: King Abdullah attended the New England boarding school, and Queen Rania is renowned for her sense of style. Although Jordan is a staple for the European jet-set, it remains relatively unknown for American travelers. Even when our First Ladies of pop culture (Sex and the City, duh) traveled to the Middle Eastern desert, they only visited Abu Dhabi. Hopeless American tourists indeed (and an even more hopeless sequel, at that). What is it about this country that so appeals to the royal family and their blue blood affiliates? A mixture of ancient architecture, vast deserts, and elegant nightlife on Rainbow Street in the nation’s capital. From Dead Sea resorts to desert safaris, here is your royal travel guide of must-sees in Jordan.

1. Wadi Rum: This UNESCO World Heritage Site is also known as the Valley of the Moon, and the desert where Princess Beatrice took her recent holiday is also beloved by Will and Kate (it was even reported as the site of their honeymoon). Desert safaris offer a unique opportunity for unmediated adventure and cultural immersion — a chance to experience a way of life that’s usually inaccessible to visitors. The freedom is liberating: Navigate by camel, ATV, and Jeep 4×4 under the Middle Eastern sun by day, and set up camp with Bedouin hosts beneath a spectacular sky of stars at nightfall. Be the first of your friends to Instagram from this majestic place — a picture of the sunset (with its vivid orange and pink sky) is sure to produce your most likes ever.

2. Amman: Jordan’s capital city — where Kate spent part of her childhood — is a historic blend of old and new. Head to the souks of the Old City to sample a traditional Middle Eastern marketplace, then visit the bars and restaurants of Rainbow Street to partake in the city’s burgeoning nightlife. The architecture and cuisine to be found along the palm-tree-lined streets of this charming city are not to be missed.

3. The Dead Sea: A short drive from Amman is the lowest point on Earth: the Dead Sea of Jordan. This natural wonder is also the saltiest point on earth, and — thanks to a rapidly changing climate — the time to visit is now, as this uniquely dramatic landscape could disappear within the next hundred years. Stay at the luxury Kempinski Hotel Ishtar Dead Sea to holiday like a royal: With a spa, tree-shaded pools, and a private stretch of beach, this property is perfect for enjoying the natural wonder away from the crowds.

4. Aqaba: This seaside town on the Red Sea’s Gulf of Aqaba — also known as the “Bride of the Red Sea” — is a less salty alternative to the Dead Sea. Located just south of the city in the Aqaba Marine Park, its Yamanieh coral reef is one of the most magnificent in the world and a favorite among scuba divers. Even if scuba isn’t your thing, this coastal resort is perfect for all water enthusiasts, with windsurfing, snorkeling, and boating expeditions (and if simply watching the waves roll in is more your speed, there’s plenty of alfresco seaside dining).

5. Petra: The rose-red city of Petra is a can’t-miss destination — not only in Jordan or the region, but on the planet, as the ancient city is one of the New Seven Wonders of the World. The 850 steps to Ad Deir (“The Monastery”) are 100 percent worth it and most beautiful (and less swarmed by tourists) at sunrise or sunset. After a day of exploring, the walk down can be even more grueling than the hike up, so we recommend a donkey ride as a leisurely reward at the end of your day.

6. Jerash: Another ancient city that’s a favorite among travelers, Jerash is located just north of Jordan’s capital of Amman. It’s home to the country’s famed Roman ruins, so be sure to visit the Temple of Artemis and the Arch of Hardian. And the Jerash Archaeological Museum brings the past to life for even the most neglectful student of world history. But as you’re touring the city’s cultural legacies, remember your sunblock: The Jordanian sun is not to be underestimated, especially in the summertime.

Are you planning to go somewhere amazing, or did you just get back from an exotic locale? Tag us in your vacation photos on Instagram!

Katherine Parker-Magyar
Katherine is a freelance writer focusing on travel, culture, lifestyle, and politics. Her work has appeared in The Week, Tasting Table, Elite Daily, POPSUGAR, and Electrify, among other publications. She's traveled to all 50 states and 40 countries, but calls New York City home. Follow along on Instagram at @katherineparkermagyar or visit her website at www.katherineparkermagyar.com.
inspiration
Travel
inspiration Royal Family Vacation