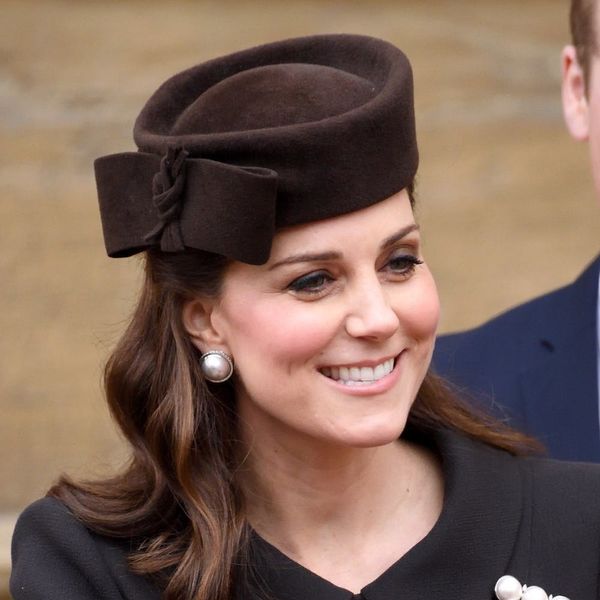 Kate Middleton just may be the master of April Fool’s! The mommy-to-be, who was last seen rocking skinny jeans in late March, had confirmed via Kensington Palace that she would be swearing off all public engagements until her third baby (who will have a very long and complex title) had arrived. Yet just this morning, she surprised the world by stepping out for Easter service with Prince William and Queen Elizabeth II just days ahead of her due date.

The Duchess of Cambridge looked as regal as ever for the occasion, bundling up in a dark Catherine Walker coat, nude heels, a Lock & Co. Betty Boop hat, and oversized Balenciaga pearl earrings and a matching pearl brooch.

Her look stood in stark contrast to the Queen’s, however, who was decked out in her Sunday best of a fuchsia overcoat and matching hat with floral adornment, a floral-print dress, black gloves, and square-toe shoes.

Noticeably absent from the affair were Meghan Markle and Prince Harry, who are indulging in “private plans,” according to Kensington Palace.

As we previously reported, Middleton, 36, who is due sometime in April, is currently on maternity leave and is unlikely to be seen again before the couple’s May 19 wedding. Then again, there’s always a chance she’ll surprise us once more and pop up when it’s least expected!

What do you think of Kate’s Easter look? Share with us over @BritandCo.

Nicole Briese
Nicole is the weekend editor for Brit + Co who loves bringing you all the latest buzz. When she's not busy typing away into the wee hours, you can usually find her canoodling with her fur babies, rooting around in a bookstore, or rocking out at a concert of some sort (Guns N' Roses forever!). Check out all her latest musings and past work at nicolebjean.com.
Celebrities
Celeb Style
Celebrities Celebrity Style Easter Kate Middleton Kate Middleton Style Royal Family Royal Style