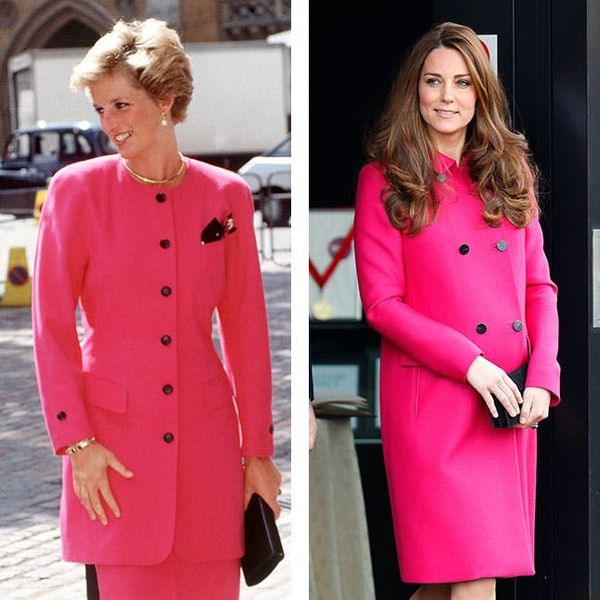 Though Kate Middleton has her own unique spin on approachable royal style, the Duchess of Cambridge often deliberately draws style inspiration from a sentimental source — Princess Diana. It's really no surprise that Middleton pays sartorial tribute to her late mother-in-law given their shared regal-yet-relatable fashion sensibility. Working closely with her trusted aide and stylist, Middleton continues to dazzle in a mix of high-end and affordable buys that include more than a few subtle nods to Diana's most memorable looks. Here, eight times the Duchess of Cambridge paid homage to the Princess of Wales using color, cut, and covetable fashion.
Princess Diana tested out a striking hot pink skirt suit for a visit to Westminster on June 1, 1990. (Photo via Tim Graham/Getty)
Middleton stunned in a fuchsia Mulberry topper on March 27, 2015 at the Stephen Lawrence Centre. (Photo via Max Mumby/Getty)
On May 1, 1985, the Princess of Wales wore a white Catherine Walker coat dress and matching Graham Smith hat for a visit to the Isle of Wight. (Photo via Lucy Levenson/Getty)
The Duchess of Cambridge chose an Alexander McQueen outfit for the christening of Princess Charlotte on July 5, 2015. (Photo via Chris Jackson/Getty)
Princess Diana left St. Mary’s Hospital on September 16, 1984 with her new son Prince Harry in a red coat. (Photo via Terry Fincher/Getty)
Middleton wore an inspired Jenny Packham red frock with a Peter Pan collar departing from the same location, St. Mary’s Hospital, on April 23, 2018 with her new baby Prince Louis. (Photo via Chris Jackson/Getty)
Princess Diana dazzled in a shimmery Catherine Walker gown in Qatar on November 15, 1986. (Photo via Kent Gavin/Mirrorpix/Getty)
Middelton shut it down in an intricate Jenny Packham dress at the Palladium Theatre in London on November 25, 2017. (Photo via Karwai Tang/Getty)
Princess Diana wore a fashion-forward Moschino houndstooth suit on December 23, 1990 attending the christening of Princess Eugenie. (Photo via Princess Diana Archive/Getty)
Middleton donned a red Catherine Walker houndstooth style on her royal tour of Sweden on January 31, 2018. (Photo via Samir Hussein/Getty)
Polka dots ruled Princess Diana’s look at The Royal Ascot race on June 15, 1988. (Photo via Julian Parker/Getty)
Middleton embraced the polka-dot trend with a Jenny Packham frock on July 14, 2018 at Wimbledon Tennis Championships. (Photo via Clive Mason/Getty)
For her wedding rehearsal on July 27, 1981, the Princess of Wales went for a high-neck printed midi dress. (Photo via Tim Graham/Getty)
A floral Prada design fit the bill for Middleton’s visit to the Sunken Garden at Kensington Palace on August 30, 2017. (Photo via Samir Hussein/Getty)
The Princess of Wales celebrated Easter in a pastel Catherine Walker coat on April 19, 1987. (Photo via Tim Graham/Getty)
On November 8, 2015, the Duchess of Sussex opted for a similar Mathew Williamson structured jacket at Pembroke Refinery. (Photo via Samir Hussein/Getty)

Bobby Schuessler
Bobby Schuessler is a contributing fashion writer at Brit + Co and has contributed to Who What Wear, Refinery29, Lucky, Glamour, Out, Nordstrom, and Barneys New York. When he's not writing about style and shopping, you can find him catching up on the latest Housewives franchise and sipping his go-to drink, a vodka martini with a splash of cranberry and a twist.
Kate Middleton
Celeb Style
Kate Middleton Kate Middleton Style Royal Family Royal Style
More From Celeb Style

8 Ways to Wear a Power Suit This Spring, According to Celebs