Fight the Frizz With Blotting Papers for Your Hair 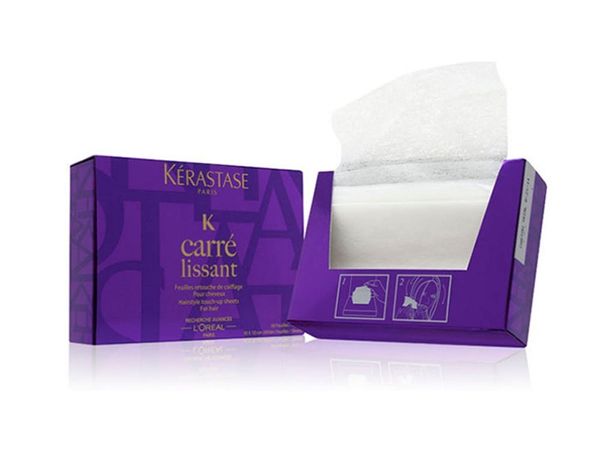 Isn’t it the worst when you’ve spent hours perfecting an at-home blowout (or indulged in a trip to Drybar), only to be left with tresses that can’t be tamed a mere two days (or sometimes two hours) later? It’s a domestic goddess secret to pop into the laundry room, grab a dryer sheet and smooth out unruly, Medusa-like strands with a few swipes. And while yes, it gets rid of static cling, if you’re anything like us, we know that you’d rather not smell like Snuggles the Bear at the office. Luckily, Kérastase is releasing a product that will zhush up your daily ‘do in one fell swoop with hairstyle touch-up sheets.

These magical sheets, called Carré Lissant ($28), are essentially blotting sheets for your hair. They work just like the ones you use to soak up excess oil off your face, but it gives new life to lackluster, frizzy hair. And unlike the fresh linen scent that dryer sheets impart on your locks, these have a light fragrance of grapefruit, roses and patchouli. And they’re super convenient to stash in your purse for long days (that turn into nights) at the office.

You’ll be able to pick up your own pack of these wonder-sheets in November on the brand’s website. Granted, they’re a bit steep when it comes to price, but the static-eliminating wax embedded in each sheet is something we’re willing to splurge on. Especially if it’s a foolproof way to save a blowout or to fight the impending static hat head that’s going to roll in with the winter winds.

Would you use these blotting papers to tame your tresses? Let us know in the comments.

Maureen Luyun
Maureen is a writer and brunch enthusiast laughing way too loudly in Texas. If she isn't voraciously turning the pages of the latest celebrity memoir, she's probably picking up a new skill to use for a DIY project. Shopping (online and off) is her cardio, and as an avid advocate for the handwritten note, she loves to send (and receive) snail mail. Like Kanye West once tweeted, sometimes she gets emotional over fonts.
Hair Products
Hair
Hair Products
More From Hair