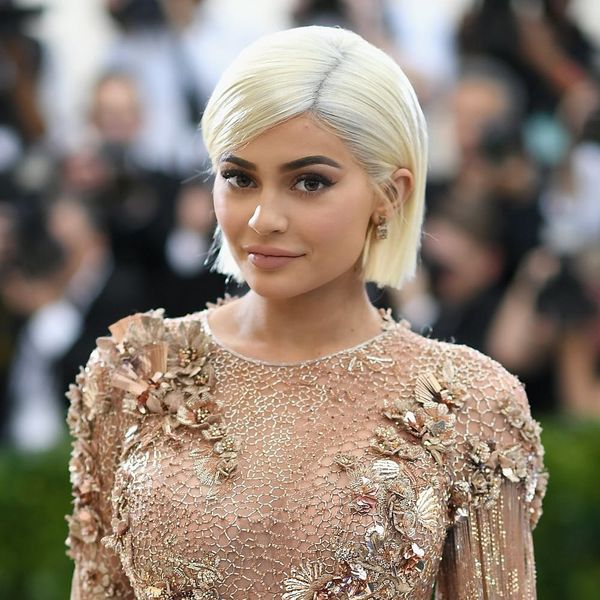 Kylie Jenner fully admitted on the red carpet (er, blue and white carpet) that she had every intention of breaking the Met Gala’s no photo rule and, oh boy, did she ever! We may have thought that her attempt to out-naked her sister, Kendall Jenner, was the most outrageous part of Kylie’s night, but her epic group selfie definitely proved us wrong. *jaw drop*

While we weren’t given a glimpse at the spectacular event space which saw the hottest celebs celebrating art in one of most fabulous parties of the year, we *were* given a peek at the bathroom. Though that may not seem too grand at first, it’s totally understandable when you acknowledge that this pic needed to be taken in (semi) secret. So, to the bathroom everyone flooded. And it resulted in one of the most epic group selfies of all time.

In a photo that rivals Ellen’s Oscar pic, we get a whole lotta style and a whole lotta sass. We’re not only spying Kendall, but Kim K-W is also there, and Kendall’s cozying up to rumored bae A$AP Rocky. Sean Diddy Combs nabbed a near center spot while Brie Larson barely managed to squeeze her way into the shot and Paris Jackson literally topped things off.

There may be a flash in the bottom of the pic that slightly blurs the shot, and the attendees are more than a little jumbled, but it’s undeniably one of the most epic selfies to come out of Hollywood so far this year.

What do you think about Kylie Jenner’s photo? Let us know @BritandCo!

Desiree O
Desirée O is a ‘Professional Bohemian’ who loves anything and everything related to the arts, entertainment, and pop culture. She ADORES being a ‘Newsy’ for Brit + Co, covering all of the latest tidbits of awesomeness that you want to read about. When she’s not writing, she’s either making messy art, going on long adventurous walks with her camera, or poking around over at bohemianizm (http://www.bohemianizm.com/). You can find out about Desirée O and her work at http://DesireeO.com/ or follow her on Twitter @DesireeO.
Kylie Jenner
Celebrity News
Kylie Jenner Met Gala Selfie